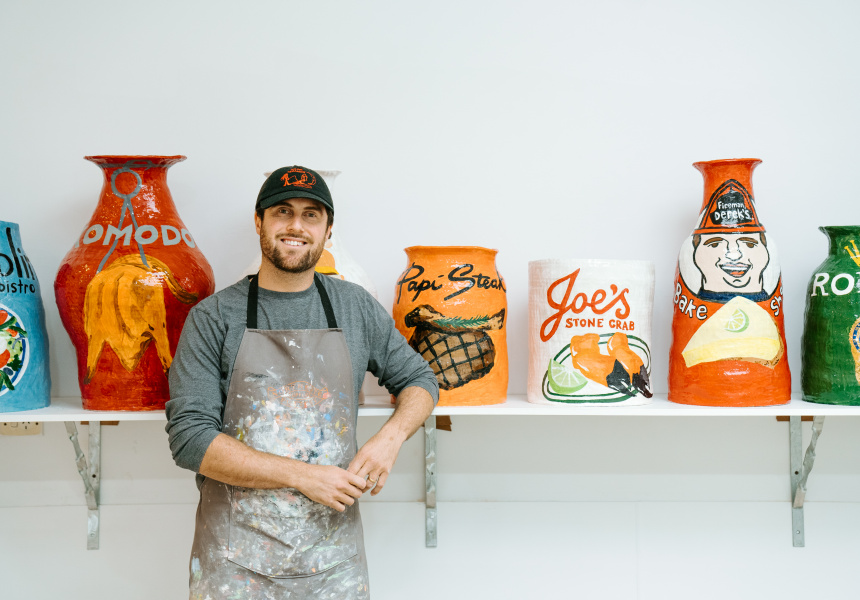 Attached to the two longest walls of Jake Clark’s narrow rectangular studio – located behind a busy stretch of Punt Road in Melbourne’s south-east – are shelves that run half the length of the space. The shelves are filled with ceramic sculptures at various stages of life. Recently born, matte-grey clay vessels. Mid-cycle pieces, in the form of amphoras or cylinders or swimming-pool shaped ashtrays, painted with pastel motifs and logos, ready to be fired. And finished artworks – glossy, hyper-coloured, post-kiln – lined up like soldiers in varying heights and shapes, each paying tribute to the cultural institutions and pop-culture icons of Brussels.

Visit the white-walled studio at a different time and the protagonist city might be New York. Or Paris. Or Miami.

Clark’s hand-built sculptures, which are held in private collections throughout America, Europe and Asia, are homages to the iconic venues, brands and cultural phenomena that are essential to their city’s DNA: the local food institutions, especially, but also beloved sports teams, storied hotels and iconic films.

A recent solo show in Miami featured 32 works in salute of South Beach institutions such as The Setai hotel and dive bar Mac’s Club Deuce; the Miami Dolphins, the city’s prized football team; and legendary food joints including Joe’s Stone Crab and Versailles.

One squat, shiny vessel paid tribute to Scarface, the Brian de Palma film starring Al Pacino as Miami crime lord Tony Montana. Like the iconic 1983 film poster it’s painted half black, half white, with the title splashed across it in red. In lieu of renditions of Pacino or co-star Michelle Pfeiffer, Clark painted a wad of cash and a pistol. All Clark’s artworks combine the symbols and slickness of commodity culture and consumer branding (a red In-N-Out logo, the medieval letterform of the Chateau Marmont, Missoni’s signature zigzag motif) with a deliberately handmade form and folksy, memorabilia-like quality.

“My pots are not perfect,” he said in an artist’s statement last year. “They’re a little wonky and to me, that is life, and that has attractiveness to it.”

Though rich in historic and artistic references – especially to ancient Greek mythology and pop art from David Hockney to Keith Haring – Clark’s glazed earthenware, with its bright colours, oversized scale and pop-culture iconography is instantly accessible, especially to fellow food lovers (though it’s more apt to describe Clark, who documents the food he eats and the restaurants he patronises in encyclopaedic fashion, as food-obsessed).

In the context of the pandemic – and the damage it’s done to hospitality industries the world over – Clark’s pieces have transformed from celebratory paeans to (in some cases) wistful memorials. In his 2020 New York solo show, for example, Clark included a pot dedicated to Lucky Strike, the 30-year-old Keith McNally institution that was one of city’s most publicised Covid-19 hospo closures.

“Just as the ancient Greeks inscribed their vessels with the mythology of their own time, here Clark has made a decorative vessel which bears certain stories about 2020 and its values,” a curatorial assistant from the Whitney Museum of American Art said about his New York exhibition.

“Most of my pieces are my take on what I loved or found to be iconic in a place – something that stuck in my mind, whether it be a certain meal or the colours of the place or its logos,” Clark says. They’re also “spots that I feel sum up a certain moment in time,” he adds. So as a collection of works they’re not only loving snapshots and odes, but also time capsules.

If things had been different in 2020, Clark might have visited his New York show, gloriously titled Half Sandwich and Matzo Ball Soup, from a temporary home in Los Angeles; in March last year he had his bags (literally) packed for a move to California. Instead, well, you know the story. In the end a smaller but still important relocation took place; Clark left his studio in Richmond and set up this new space in Windsor.

When Broadsheet visited the new studio, Clark’s shelves were filled with the beginnings of his contribution to a group show in Brussels. Alongside his signature oversized pots, each body of work contains a series of ashtrays, each studded with glassy little ceramic cigarette butts and painted with some pop-culture reference. Sometimes they take the form of a kidney-shaped swimming pool, other times a tennis court. Though a fraction of the size of Clark’s vessels, these pieces are incredibly fiddly and time-consuming – with “all these little pieces,” Clark says, pointing to the miniature butts, “and painting around them”. But the effort is worth it; the ashtrays are some of his most interesting and whimsical pieces.

Thirty-six-year-old Clark has a rippling energy and he enjoys being busy. He’s self-taught (“I went to art school for the first day, sat there, and then walked out … I didn’t want to be in school again – I hated school.”) and started his career painting before moving into ceramics. He prefers the variety offered by working with clay, which in his practice still involves a painted element.

“I can build a bunch [of pieces] and then, after a few days of building, some are ready to be painted. So I can break things up – I don’t feel like I’m working on a canvas the whole time. That got a bit tedious,” Clark says. “When I’m here, doing this, it’s very relaxing, I’m in my zone, working, music going. I find it very therapeutic.”

At the studio his black standard poodle, Prince, is never far from his feet and there’s always hip-hop on the speakers. Clark’s working on a wide, hollow cylinder, about 50 centimetres high, his fingerprints clearly marking the vessel’s facade. He uses an extruder to generate long, even coils of white raku clay, which he loops, one on top of the other, before blending the spirals together with his fingers to build each piece.

The aforementioned sculpture will eventually grow to almost one metre high, and become a bold, shiny tribute to one of Clark’s most beloved American landmarks – Carlyle Hotel in New York’s ritzy Upper East Side.

“I’ve spent a lot of time at that hotel, and [its] Bemelmans Bar. There’s something very special about it and all its history,” Clark says. Named for Ludwig Bemelmans, the writer and illustrator of the iconic Madeleine children’s books, the hotel’s famous bar has a sprawling mural painted by the author. “I could look at it for days, with its map of Central Park and all the seasons in it. I really love the Upper East Side and all its old spots – you feel like you’re stepping into a movie.”

Clark is an unabashed Americanophile. He lives and breathes the place. He watches the NBA religiously, his dream dinner dates are Larry David and Jerry Seinfeld and, most significantly, he’s devoted much of his practice and career to memorialising its cultural icons.

“I’ve always had a connection to America. I’ve been going there since I was small, and I’ve spent a lot of time in LA and New York. LA in particular feels like a second home. There’s something about the place. The city is so vibrant with its massive billboards, palm trees and neon, flashing lights. [Even] the supermarkets with all [their] different iconography. It’s always captured my eye. When I was a little kid I’d always be drawing those [logos and the signage].”

Though Clark isn’t traveling overseas right now, his work is on a world tour. In addition to this year’s exhibitions in Miami and Brussels, his pieces have also appeared in a group show in Aspen. Another two solo exhibitions are scheduled in Paris and LA before the year is up.

“At the moment, being so restricted with travel, my senses are heightened when I’m working on these pieces,” he says. “I feel like they briefly take me back to each place, which has helped keep me sane during this time.” 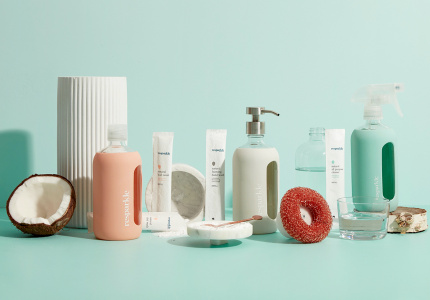