Though his work regularly appears in Australia’s major mastheads, the illustrator didn’t come to his career until his thirties. Two decades on, he worries it’ll come to a sudden end: “What do I do? Just come up with jokes and do some scribbles on a page. That’s not a skill.” 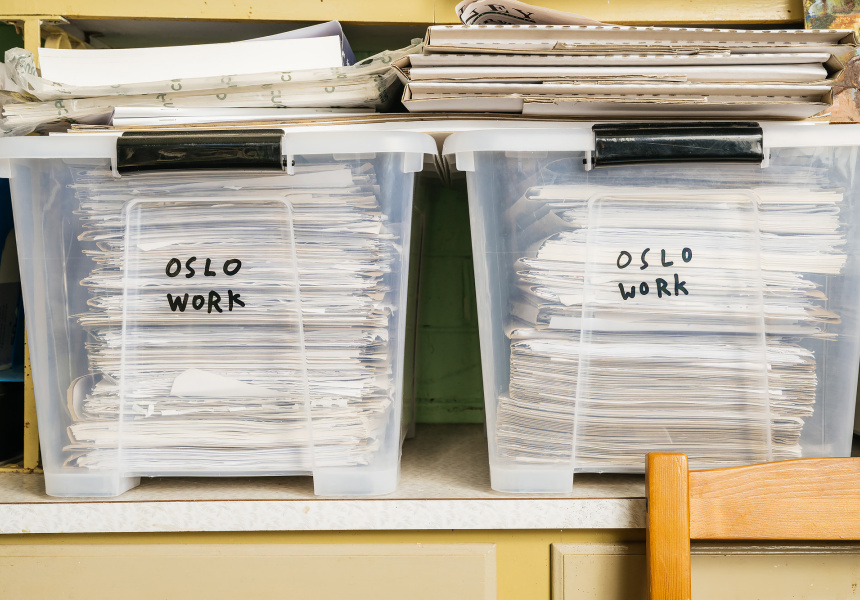 There’s a well-worn trope among people accomplished in a particular field: they showed an interest and aptitude from the very beginning, tapping balls or plucking strings almost before they could walk and talk. Not so for Oslo Davis. The “semi-famous” illustrator and editorial cartoonist’s works appear regularly in The Age, The Monthly and other Australian media, and last year he illustrated the Broadsheet cookbook, Home Made, but he “didn’t really like drawing as a kid,” he tells Broadsheet. “I wasn’t one of those kids that drew much. I wasn’t very good at art. I didn’t like the art teacher at high school,” says Davis.

The 49-year-old illustrator lives with his wife and two teenage daughters in Footscray, in Melbourne’s inner west. It’s a neo-Mediterranean redbrick, with orderly lines of grey concrete pillars on the fence and front porch. Out back, there’s a quiet tree-lined yard with weather-beaten timber furniture. From here it’s a couple of steps to Davis’s studio, a freestanding granny flat not much wider than a hallway. Almost half the floor space is taken up by plastic archive tubs filled with press clippings, sketches, notebooks and other ephemera. The remaining space holds a drafting board, a lanky swing-arm lamp and a glossy iMac planted on an ink-splattered desk. His chair is a Herman Miller Mirra 2, snagged on Gumtree for $350 – “It makes me feel better, more professional, than I am,” he says. Pencil stubs and dried-up paintbrushes crowd the opposite corner.

Despite his large trove of work and success, he remains possessed with an endearing Larry David brand of neuroticism, where failure, disgrace or irrelevance always seem imminent, even inevitable. But in true Larry David style, this anxiety is another topic eagerly mined for comedic material.

“I need a backup. I need skills. I need to be good at something,” he says, half-joking, half-serious. “Friends of mine can build beds, or drive tractors or have some vocational skills. I mean, what do I do? Just come up with jokes and do some scribbles on a page. That’s not a skill.”

The thousands of readers who’ve snort-laughed at Overheard, a single-panel gag that’s appeared weekly in The Age since 2007, would disagree. Davis documents the absurd, pretentious and hilarious comments he hears on the streets of Melbourne. He’s now published more than 700 of these pieces, and in 2017 turned the best entries into a book, Overheard: The Art of Eavesdropping.

Every five or six weeks he takes his sketchbook and spends a day lurking at tram stops, building sites, supermarket car parks and other places where people can be heard talking freely. After the subjects have unwittingly said their bit and left the scene, he takes a picture to remind himself how it looked and felt.

Back in the studio, ideas are often mocked up on an iPad before being finished in pencil, charcoal or watercolour, depending on the client and the job. He tends to work between 9am and 3.30pm, while his daughters are at school. And sometimes on weekends, but not much more than that. “I don’t have any structure,” he says. “I just do the work when it comes in, when I have to do it. If I’m done, I’m done. As long as I get everything in on time and people are happy, and I’m doing the best I can, that’s fine.”

Davis realised long ago he doesn’t have the temperament to be an “artist-artist”, working for months at a time towards some far-off exhibition. It’s too vague and self-contained for his liking. He prefers working with clients, who put the fire under his bum with deadlines and challenge him creatively, even if it sometimes involves compromising on his original ideas.

“It’s just the way it is,” he says with a shrug. “I’ve done some much better work with art directors who know what they’re doing and how to make me better and push me into new areas. It can be a really great thing.”

This pushing into new areas is important to him. Though he’s done some op-ed work and has great respect for peers such as Cathy Wilcox and Jon Kudelka, he’s never wanted to specialise in political cartoons, or any other type of cartoons, banging the same drum week after week. It’s too limiting.

As long as there’s a joke in there, it’s all good. And actually, that’s really all that matters. With no formal training, Davis has never aimed for recognition as a “fancy artist” admired for quality line work or shading.

“I don’t think I wanted to be an artist,” he says. “I think I just wanted to tell jokes. And I didn’t think I’d be very good at stand-up or acting or TV or movies. So this was an outlet. I didn’t care too much if the drawings looked good. The main thing was the joke. I think, luckily, that’s gotten me through.” (In 2016 he published a book on this very topic titled Drawing Funny: A Guide to Making Your Terrible Little Cartoons Funnier.)

That drawing-averse child metamorphosed into today’s constantly drawing man, slowly and unintentionally. In his early years Davis studied English literature and teaching, briefly teaching others. Later he worked at arts organisations including Craft Victoria, Abbotsford Convent and Asialink at the University of Melbourne.

In his twenties, while backpacking and working in India, Vietnam and Japan, he began keeping a visual diary and saw his latent passion emerge.
“Eventually the drawing became a major thing,” he says. “By my early thirties I was drawing nearly all the time, but still had to maintain part-time jobs. But the balance eventually shifted, where it became the main gig.”

He’s considered formal training but feels like he’s past it now. This lack of education, plus the rickety career path, seem to underpin his belief that the house of cards could collapse at any moment.

“Things miraculously keep on popping up. That’s the scary side of the work,” he says, clearing his throat and shuffling posture in his Herman Miller. “It’s not regular and you’re just hoping the email comes into your inbox. And it may not one day. And it won’t one day. That’s when I’ll have to become a fishmonger or sell herbs at Footscray Market.”

Illustrating the book cover and a few dozen recipes for Home Made was one such unexpected drop-in project from a client he’d never worked with. Davis’s playful lines gave Broadsheet’s fourth cookbook undeniable warmth, humour and charm. For example, Shane Delia’s “showstopping” baked salmon basks in a dish, grinning maniacally and snapping a selfie like a showbiz star. Victor Liong’s drunken pippies wobble on a barstool, sucking liquor from a straw. We loved these visual one-liners so much, we turned some of them into limited edition framed wall prints.

Despite the inoffensive, mostly apolitical bent of Davis’s work and no hint of controversy in his career thus far, he still frets about inadvertently being “cancelled”. He cites the example of cartoonist Michael Leunig, whose reputation has slowly dwindled from its titanic ’80s heights.

“Already my teenage girls are pulling me into line with pronouns,” he says. “I sweat on some things I’ve sent in, that when it comes out in the paper it’s going to be read in the wrong way.

“I’m gonna get old – I’m gonna be an old man. And one day my old-man opinions are going to be out of whack with what’s going on, and I probably won’t see it coming. I’m all right now, aren’t I?”

Home Made features 80 diverse recipes for home cooking, sourced from Melbourne’s best cooks, chefs and restaurants. Published by Plum, the book is available for $49.95 at shop.broadsheet.com.au.