The New Zealand-born artist doesn’t like the word “spiritual”, but she enters a “painting trance” to create her ethereal, abstract compositions. Each one is filled with symbolism and a secret language. 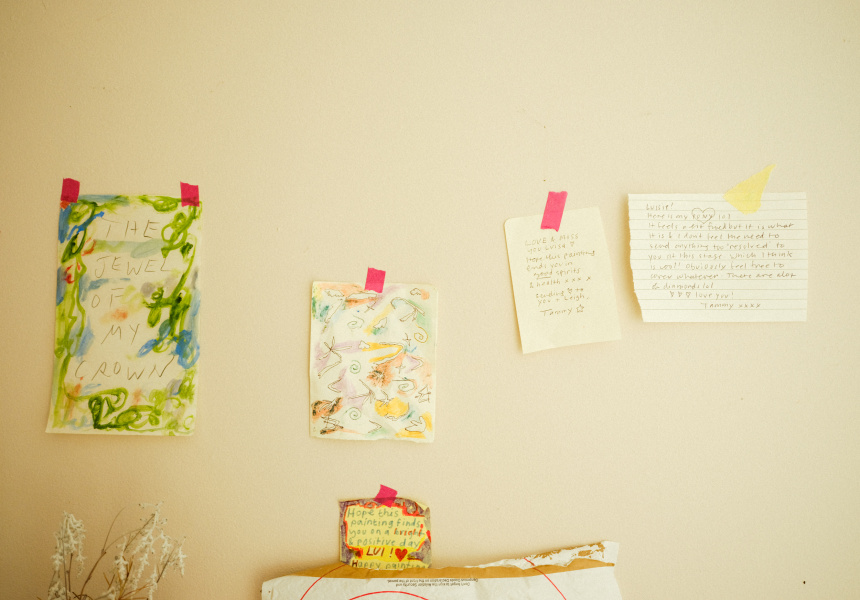 “To someone looking, my flowers might just be flowers,” artist Luisa Hansal tells Broadsheet. “But for me, it’s a secret language.”

She repeatedly uses the shape of a nondescript flower with five petals. It might not be obvious to the viewer, but for Hansal the five-petal flower is encoded with significance.

Each petal represents Hansal’s family members: herself, her mother, father and her two brothers, the younger of whom died in a freak accident when he was 24 and she 27. Often, the fifth petal is depicted as ruptured in some way; an expression of the family’s loss.

Her brother, Lee, suffered severe brain damage in a bicycle accident when riding to work one day, and the family was faced with the impossible decision of whether to continue or end his life support. They collectively chose the latter, and Hansal was sitting with him when he died.

“It was a mind-blowing thing to experience,” she says. “It’s a privilege to be there and watch someone take their last breath.”

Hansal trained as a visual artist at Edith Cowan University (ECU) in Perth, graduating with a place in the acclaimed annual Hatched: National Graduate Show at Perth Institute of Contemporary Arts (PICA). But her intuitive way of making work – as opposed to an institutional, theory-led approach – was largely shaped in the final semester of her Masters at RMIT in 2017, in the wake of her brother’s death.

At RMIT, she’d been working a lot with sculpture, but after witnessing Lee’s passing, painting slowly became her primary medium.

“Painting was this place where I could go to sort out my thoughts. I needed to go into myself, figure out what this meant for me and sit with it. I did a few years of painting that way,” she says.

“My teachers were like: ‘Don’t finish’. But I went straight into my work, into my studio; and in six months, my work was completely different. It was all about death.”

The works she produced in that period, which culminated in her 2021 show Always Holding Something at Perth’s Goolugatup Heathcote gallery, were dark, obscure compositions that document not only her very personal grief, but also her contemplation of human mortality.

This time also saw many of Hansal’s other recurring motifs develop, such as the moth. “I think it’s a common thing when someone is grieving, you attach yourself to things,” she says. “I saw moths everywhere in my studio, and I was convinced that Lee’s spirit was in these moths.” There’s also the hands and feet, often depicted as boneless, almost elastic, ghostly forms – a reference to her memory of Lee’s hands and feet, the first parts of his body she noticed going cold when he died.

Hansal says she doesn’t begin her artworks with a composition in mind, instead she responds to her mood – using the canvas as a site of exploration.

The thing she’s seeking to explore or make sense of – a colour, a feeling, a relationship – will emerge before her, she tells Broadsheet. Her finished works are reflections of a barely conscious exchange she’s had with herself, and insights into an intangible realm that, rather than saying anything specific, might provoke an interior investigation for the viewer.

Despite their deeper connotations, Hansal’s motifs also have playful nuances. Historically, art that employed so-called “feminine” symbols by female artists were often disregarded as naive or foolish. One of Hansal’s main influences is Swedish artist and mystic Hilma af Klint, who is now considered one of the earliest abstract artists, but in her day she was snubbed as a “crazy witch”. Af Klint’s male counterparts, such as Russian painter Wassily Kandinsky and Dutch artist Piet Mondrian, were met with acclaim.

Hansal says she’s naturally drawn to using motifs – and that it’s an act of joyful defiance. It’s a visual language that feels both delicate and rebellious, familiar and just a little “punk”, she says.

A word the artist doesn’t like is “spiritual”. But, her symbolism and instinctive approach to creating (she refers to her “painting trance”) do have a connection to the mystic. As with the work of af Klint, as well as another influence, German-American symbolist Agnes Pelton, Hansal’s paintings are tangible realisations of indefinable psychological experiences; feelings that are difficult to hold or articulate.

“That word (spiritual) has too many connotations, but the presence of an inner world is important to me,” she says. “These kind of dream-like, surreal compositions I make are not theory-based, they are very much about feeling and being in this other world or going between worlds – my conscious world and my painting world.”

Her aversion to the term “spirituality” is a product of a religious adolescence, she says. Growing up, Hansal’s father was in the hotel business and the family moved around every few years with his work. She was born in Auckland in 1990, and at about two and a half years old she moved to Yulara, near Uluru, then Sydney, Broome and eventually Perth, where she, her mother and brothers remained while her father was working in Taiwan.

Her mother had strong family ties to the Christian church in New Zealand and attended local churches in every new place, for both community connection and childcare – she’d take the kids to Sunday school so she could get jobs done. By 13, Hansal was heavily involved in Bible study and the activities of the church. “It was my whole life,” she says. For someone used to never staying anywhere long, it offered stability and the opportunity to foster friendships.

But by 17, Hansal realised she wanted to explore beyond the religious paradigm. “I really felt like I’d been brainwashed and manipulated,” she says. “That traumatised me to an extent but coming out of it, I eventually found spirituality to be a personal thing that doesn’t need words.”

That perspective was solidified after Lee died. “For me, it’s just about having a place I can go to get in touch with that inner self, to explore what you can’t explain. It gives me balance. ‘Spirituality’ is the closest word we have for that.”

In 2019, Hansal moved back to Perth from Melbourne with the intention of opening an artist run initiative (ARI). She became a founding member of Cool Change Contemporary, now Perth’s leading ARI supporting early-career artists; and she and her partner Leigh Craft also founded Pig Melon, an independent project space in a repurposed shopfront and dwelling.

Hansal says she experienced a lot of confusion and shame after leaving Christianity behind, but now she’s found a new community to which she has strong bonds and plays a big role in championing.

Her more recent work explores what she says are the “lighter” themes and experiences she’s grown to appreciate, such as friendship and beautiful sensations. In 2021, she signed with Andrew Varano’s Sweet Pea Gallery, which represents some of the city’s most dynamic contemporary artists. Her first solo exhibition, Fluffy, contained works inspired by interactions with friends, particular words or phrases she encountered that resonated with her, and music. The paintings, vibrantly tinted, softly blended and tenderly diffused, sit in happy contrast to her earlier, more ominous compositions, with titles like Intimate Friends, Warm Inventions and Love Capsule.

Nowadays, if Hansal’s paintings are traces of her journeys into a spiritual trance, her studio is like her church. Its walls are dotted with notes and letters from friends, dried flowers and other ephemera. In one corner, several small, square works in progress are displayed in a row. They’re for an upcoming group exhibition at Pica, and are the product of a long-term collaboration with friend and Melbourne artist Tamara Marrington.

Some of the canvases were started by Hansal, others by Marrington. The two artists have sent them back and forth, adding to the work of the other and refining them. Some of the notes pinned around Hansal’s studio were from those exchanges with Marrington.

“I’ve never been in a more comfortable place with myself or what I’m doing than now,” says Hansal. “And I often find myself returning to the common theme of coming of age. Art really did help me. This is my world. It’s on my terms. It’s a part of me. And I can protect it.” 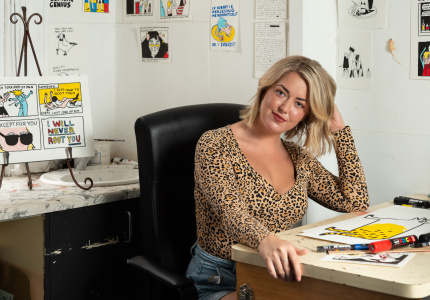