Former DJ and Sneaky Sound System frontman Daimon Downey invites us inside his Bondi art studio to talk about his striking new work. His exhibition might have been a covid casualty, but he’s taken it digital, and is having lots of fun with it. 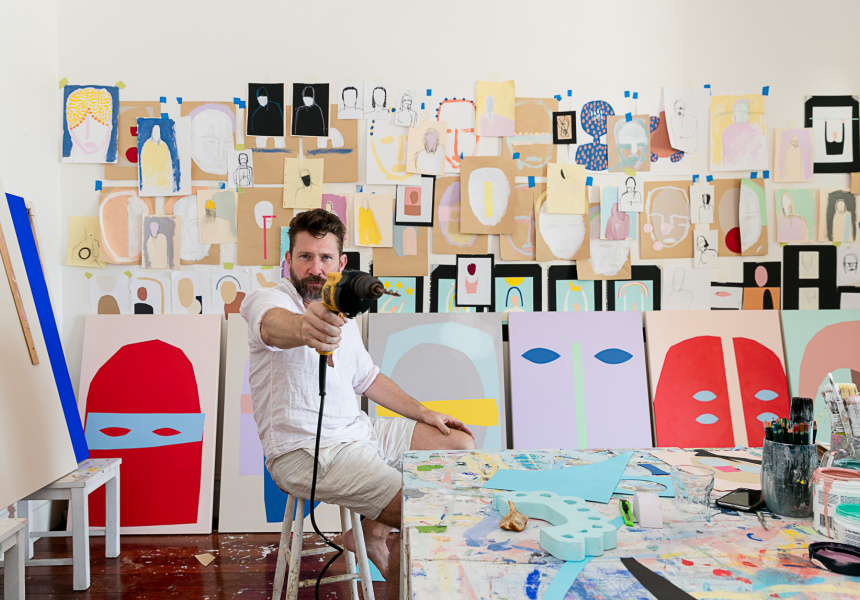 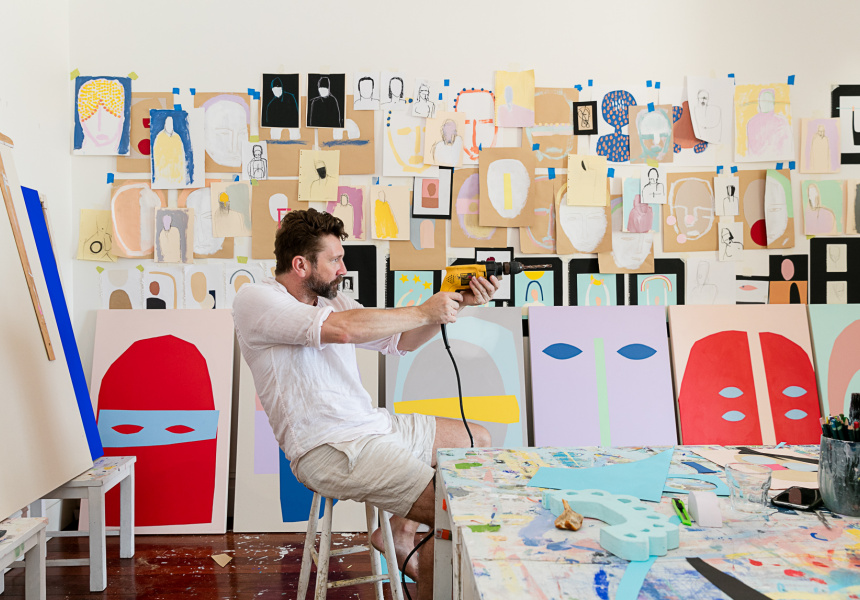 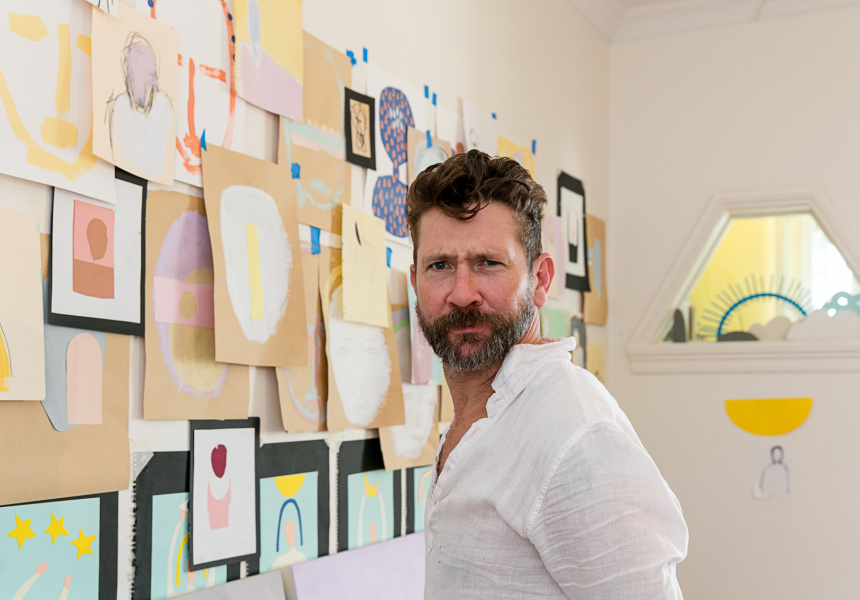 Most people know Daimon Downey as the irrepressible former frontman of Aria-award winning band Sneaky Sound System. But when he’s not in the kitchen cooking up a feast (which is quite often), he’s in his home studio in Bondi creating pop-abstract paintings, sculptures and ceramics.

His home is on Campbell Parade, Bondi’s main drag, and you need only take one step inside and your eye is immediately drawn to the enviable view. Bondi Beach is looking particularly seductive on the sparklingly sunny day Broadsheet paid Downey a visit back in February.

The paint-splattered floorboards are lined with canvases leaning against walls in varying stages of framing, and tables are scattered with rainbow-hued paint pots and jars of brushes. On the walls are early sketches of works that will be presented at his upcoming solo show Half Masked (originally planned for April, now postponed for October) which will feature 50 works on paper that explore faces in abstract form.

A giant mirror ball dangling from the ceiling is a nod to Downey’s former high-octane touring life. It is 10 years since Downey woke up one morning and decided he’d had enough of the hectic career as a touring musician that had taken him around Australia and the world performing with Sneaky as MC Double D alongside performers including Robbie Williams and Lady Gaga.

“You don’t want to be rapping and singing in nightclubs forever and you don’t want to be that guy who used to have a number one hit,” says Downey. “We were living in hotel rooms, touring constantly and trying to fill in the 23 hours waiting to get on stage, so you’re hungover a lot. Good times, though.”

During his decade touring with Sneaky there was one thing he never failed to pack: a sketch pad. Downey has been obsessed with art since he was a young child growing up in Bellingen, so much so that he convinced his parents to let him drop out of school when he was accepted into a fine arts degree in Brisbane.

“I got to play with everything from clay, to wood, to dry pastels – I basically learnt how to use all media. Then I moved to Sydney aged 19 with a suitcase full of pastels and another full of clothes, saying, ‘I’m going to be an artist in the big smoke’.”

The plan was delayed when he picked up a mic at the opening of a clothing store in Paddington and began rapping with the DJ who invited him back the next week to try a set with him.

“So, the next Sunday we did that and we got booked and kept getting booked until we thought, ‘Wow we can do this’. And just continued to do it for 14 years until I got spat out the other end thinking, ‘I need to hold a brush again’.”

In between dabbling fairly seriously as a restaurateur in Sydney – at now-closed eateries Pelicano, and The Lemon Tree, and ’80s-themed nightclub Bondys – Downey began devoting more and more time to his easel. His first solo show of “figuring it out” paintings, lithographs and small wooden and large foam sculptures sold 52 of the 55 works.

He works with acrylics, oil sticks, papercut and has recently been dabbling in collage, always to a musical backdrop – folk musicians Nick Drake and the Lumineers of late. He’s inspired by art books, magazines, movies and artists such as Sydney’s Stephen Ormandy, who most will know for being the co-designer of Dinosaur Design (“His balance and composition and colour are fucking phenomenal”).

He has since exhibited in Perth and Brisbane while collaborating with friend and fashion designer Alice McCall or taking commissions from restaurants including Raes on Wategos in Byron Bay, Revisis in Bondi and Matteo Downtown, in Sydney's CBD.

With Half Masked postponed, he’s focussing now on his website with new and previously unseen pieces. There, you’ll also find plates featuring boldly coloured crabs, prawns and sardines ($29) he did as a collaboration; and lots of pasta-inspired works in the Matteo collection.

Last week Downey started livestreaming previews of his works each Thursday night at 7.30pm from his studio via Instagram (he’s unsure how many he’ll run but it’s looking like a month’s worth). Each week he invites friends around for a dinner party to help him create a one-of-a-kind work, which he’ll auction off via Instagram. Proceeds will go to The Drought Angels, which supports Aussie farming families affected by natural disasters. Last week guests included artist Martine Emdur and Hugo Gruzman from band Flight Facilities; this week it’s tailors Patrick and Tasmin Johnson and The Daily Edited co-founder Alyce Tran, among others. There will also be an auction of all his works on the website – date pending.

Before the world went into lockdown, Downey did lots of DJing. “I play the music everyone else is too cool to play: the ’80s stuff. I’m like the cheesiest DJ ever,” he says enthusiastically.

But he’s pretty happy with the career change. “I love that [painting] is so self-contained, there are no moving parts, no band fights, it’s just really easy. Zero regrets,” he says.