Four years ago, Richard Cooper quit being a vet to pursue the art of knifemaking. Now his hand-forged blades, made from reclaimed steel and timber, can be found in the kitchens of Michelin-starred restaurants around the world. 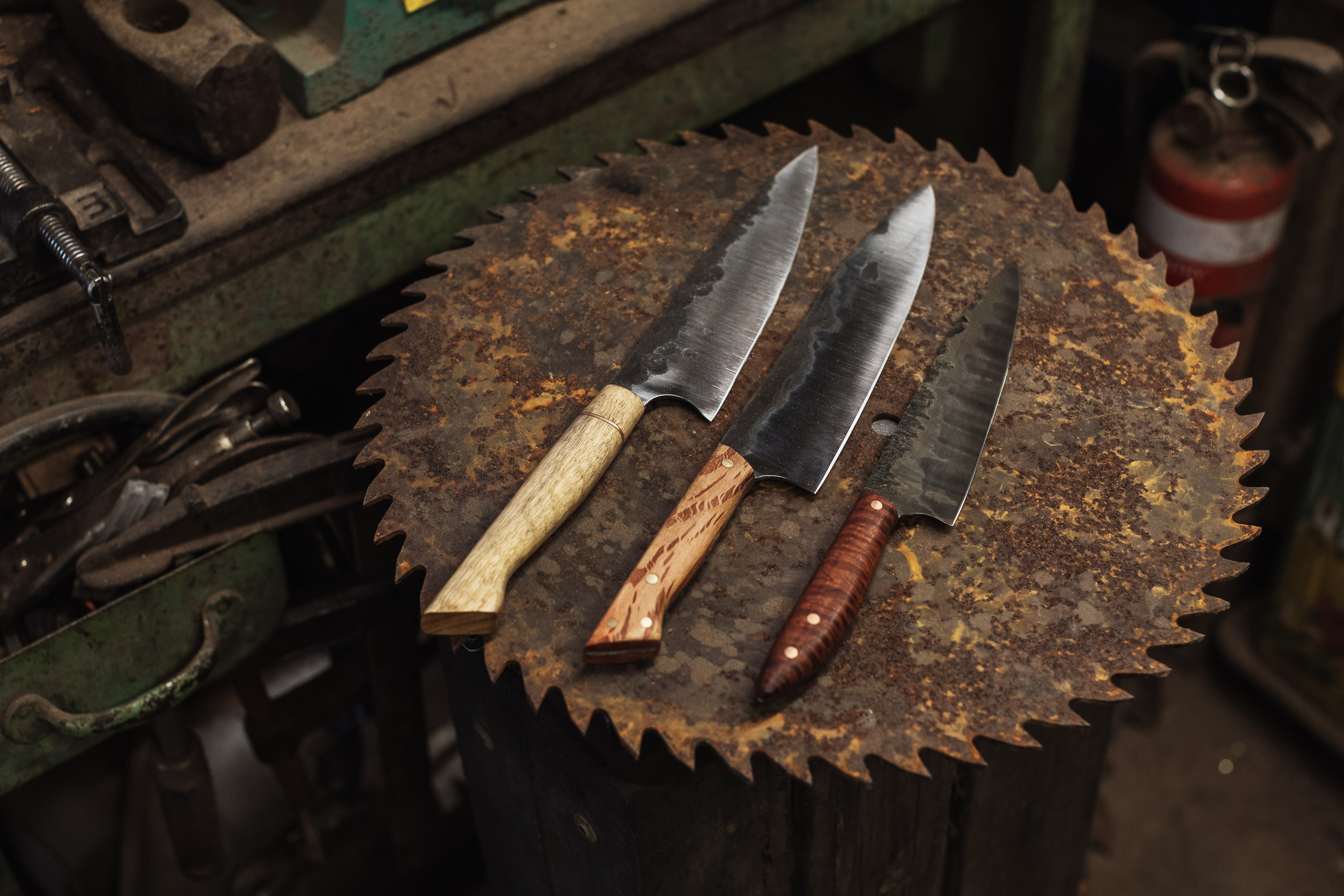 Before I arrive at cutler Richard Cooper’s home studio – before I even leave my front door – I can already hear him toiling in his back shed, grinding and hammering the exquisitely crafted blades he makes and sells under the name Dogboy Knives. That’s because he lives next door to me (it’s certainly the shortest distance I’ve ever travelled to an interview). But the buzz of Dogboy Knives has carried much further than my backyard.

Since starting out four years ago, the Adelaide bladesmith has made knives for some of the world’s top chefs, including Somer Sivrioğlu of Sydney restaurant Anason, JP McMahon of Ireland’s Michelin-starred restaurant Aniar and Alex Atala of Sao Paolo’s two-Michelin- starred restaurant DOM. The knives can also be found at Auckland’s six-seat fine-diner Pasture and in the kitchens of home cooks around Australia, and the world.

They're fashioned from recycled and reclaimed materials – old sawmill blades, wrought iron wagon wheels, leaf springs from car suspensions, and discarded metal files – which are strewn throughout his Brompton workshop.

“I like recycling because there’s so much good shit that gets thrown away,” says Cooper. “Also, it’s easier to get your hands on recycled steel than it is to get good knifemaking steel straight up. And it suits my ethics.”

Same goes for the elegant timber handles, which are made from reclaimed wood: a friend’s old floorboards, say, or scraps from furniture makers. Even a fallen tree at his sister’s home on Kangaroo Island. “Occasionally I’ll buy a really fancy bit of timber,” says Cooper. “You get all these wicked stripes,” he says of the intricate wood grain. “You don’t need [expensive timber], but it looks cool.”

As we move through his home and workspace, Cooper is flanked by his five-year-old hound, Myf, staying true to the Dogboy name. “It’s an old nickname, from a share house in the ’90s,” he says with a laugh. “I had a border collie I went everywhere with and it stuck. [It was my] being a vet as well, I guess.”

Cooper spent 25 years as a vet before learning the art of knifemaking. But he’s always been an accomplished handyman. “I’d not been happy being a vet for quite some time … you don’t create anything being a vet. I’m much happier now. I wake up wanting to get to the shed every day.

“I’ve always liked making things; I’ve always made things out of timber.” It was while helping his brother-in-law build a taproom on Kangaroo Island some years ago that he caught the knifemaking bug – after meeting a local who’d made a knife with Adelaide bladesmith Barry Gardner (Gardner subsequently gifted Cooper those aforementioned sawmill blades).

“It started as an experiment to see if I could make one for me,” says Cooper. “People saw them and liked them and said, ‘Can you make one for me’, and people started buying them.”

His side hustle quickly became a full-time job, thanks to demand generated by exposure at events such as Tasting Australia and plugs from top local chefs. Within the first year of Dogboy Knives, Cooper’s blades were favoured by Jock Zonfrillo and Simon Bryant. Since then Bryant, director of Tasting Australia, has gifted Cooper’s knives to the festival’s visiting international chefs every year.

For all of his success, and reputation among chefs, Cooper is remarkably modest. “To grow a hobby into a full-time business and survive something like covid is just nuts,” he says. “I still get imposter syndrome a lot, I still want to improve a lot. I’m still learning.”

He picks up a knife that’s still in progress, which has been forged with several layers of steel: sawmill blade, a sheet of nickel and wagon wheel iron on either side. “It’s a Japanese technique leftover from sword-making,” says Cooper. “So the hard steel in the middle is what holds the edge, and then the softer iron either side gave swords a bit of flexibility.”

The forging process happens a few doors down from Cooper’s workshop – in a friend's warehouse that’s home to a shiny new 30-tonne hydraulic press used for Cooper’s latest creation: a marbled Damascus blade made with 133 layers of steel. “It doesn’t make a better knife it just makes a prettier knife. And it’s a challenge. I’m always trying to get better and do things better.”