Pete Cromer is well known for crafting colour-drenched bird collages and anxiety-reducing stone druids. In partnership with Disney, the Melbourne artist discusses the custom portrait of Mickey Mouse he created for the character’s 90th birthday. 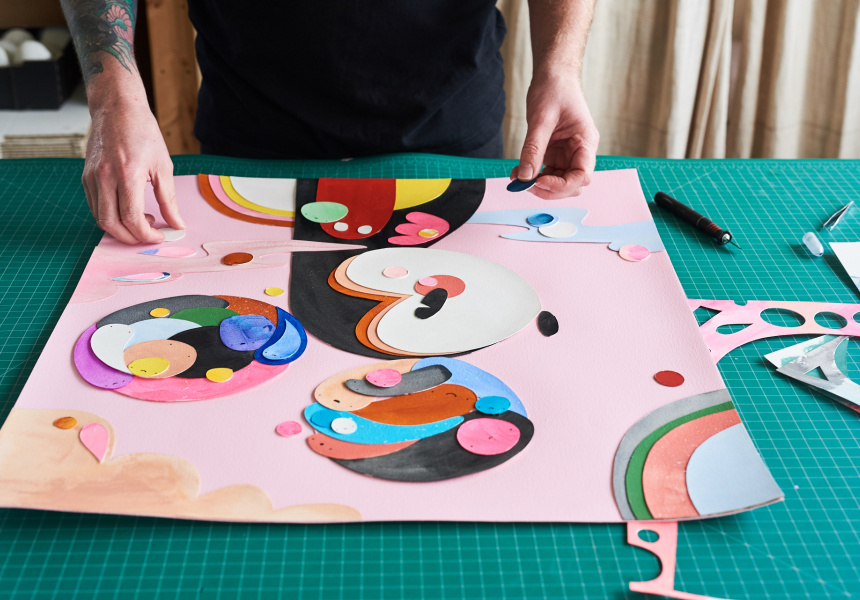 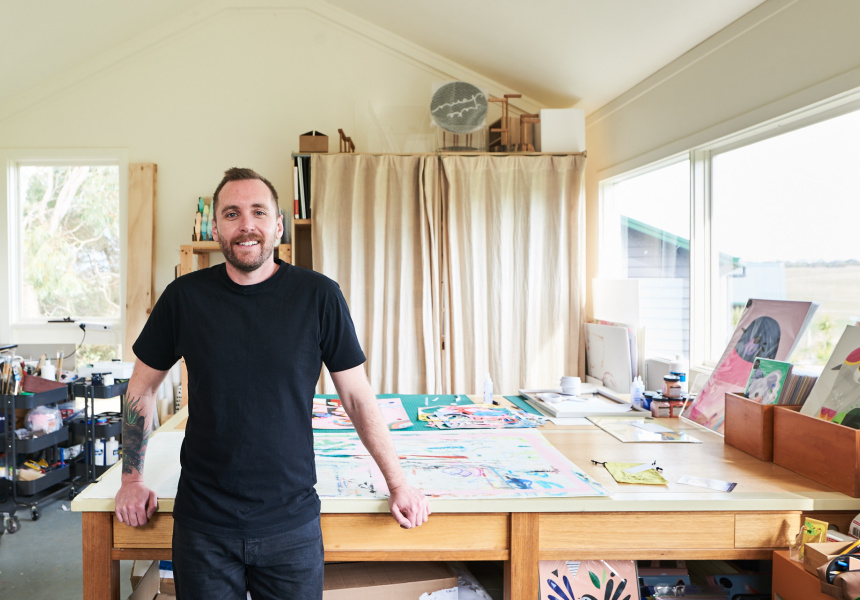 In the ’80s, Sunday night for the three boys in the Cromer household was the same every week. “We’d always have fish and chips and be in our PJs by the time The Wonderful World of Disney came on,” says Pete Cromer.

Now a successful artist based in Torquay, Victoria, Cromer channelled these childhood memories to create a one-off artwork celebrating Mickey Mouse’s 90th. “It’s a collage that creates a silhouette of Mickey, but built out of emotive blobs and shapes that express how I felt at the time,” he says. “Back when life was simpler.”

Cromer’s Mickey Mouse collage is a colourful piece – in particular Mickey’s ears, which are filled with bubbles of bright colour. A vibrant palette is a defining feature of Cromer’s art. “I’m always drawn to communicating emotions through shape and colour,” he says. “It’s the basis of all my work.”

Cromer studied graphic design at Monash University in Melbourne. After graduating he pursued a career in the corporate world, working as a creative manager at a large corporation. “It got to the point where I wasn’t being creative,” he says. “So I made the leap to go out on my own. I never expected to be where I am today, because I didn’t see how that path would unfold for me, so I’m happy I’ve had the opportunity to get where I am.”

Cromer’s distinctive style – equal parts cheerful and quirky – has earned him a loyal following on Instagram. Among his most popular collections are his “druids” – painted stones with innocent faces. “They’re little bits of energy and nice little feelings of happiness,” he says. “I get a little bit of anxiety every now and then. I found the druids calming and soothing to put around the house.”

Another design, his resin budgerigars, were so popular he recruited his partner to help him make them to keep up with demand. “They need to be moulded, sanded, painted,” he says. “He helps me do that.”

Cromer finds assembling a paper collage a meditative process. “I go at my own pace and it’s easy to change things if I don’t like the look of it,” he says. “It’s just arranging colours. It normally takes a while for me to be happy with how it looks, but there’s that flexibility of taking things out and adding it in before I make the final decision of sticking it all down. I like that freedom.”

The artist’s studio is just as vibrant as his collages. “There are lots of colourful dyes, paints [and] scrap paper everywhere, [plus] stains from accidentally knocking over things,” says Cromer. “It’s an organised mess. I have stuff everywhere, whereas my partner tidies it up and puts everything in the right spot.”

That familial lineage echoes the influence of Mickey Mouse on his childhood. “Not many characters in history have shaped the way we spend time with our family like Mickey,” he says. He was a “catalyst who brought us all together”.