The acclaimed Australian painter is holding her first-ever exhibition in the States. We spoke to her about nature, vaginas and why fashion shouldn’t be kept separate from “serious” art. 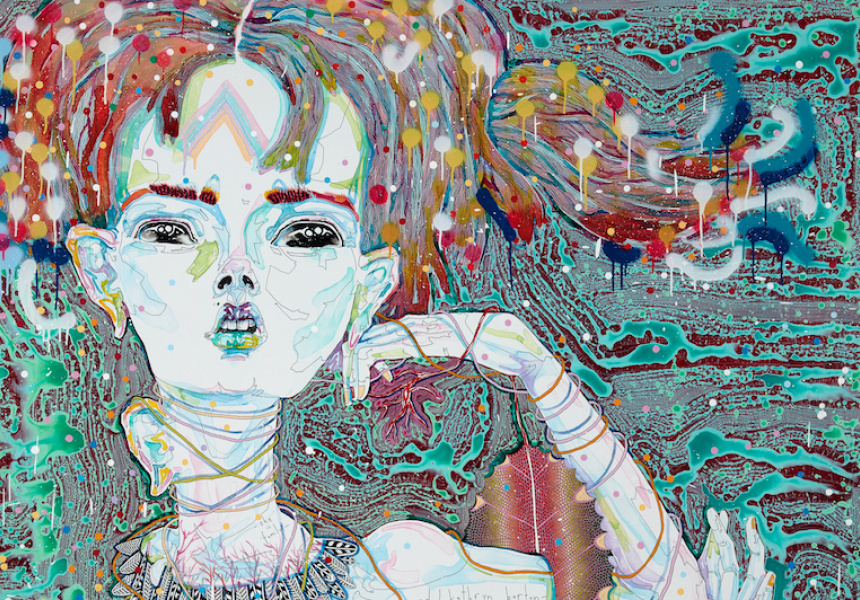 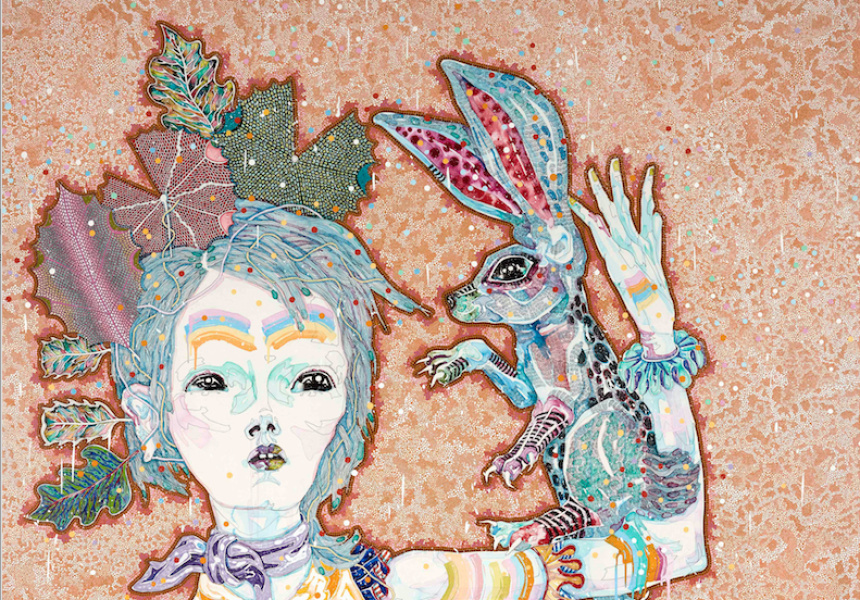 Del Kathryn Barton’s first live-action video work, Red, showed in January at the Art Gallery of South Australia. It’s the lynchpin of her first solo exhibition in the United States, r u a bunny?, where most Americans are being introduced to Barton’s work for the first time.

Red is a bold way to do it. Take Cate Blanchett in an enraged, ecstatic striptease with some pretty frightening scissors, a thumping soundtrack, and never-before-seen footage of redback spiders mating and eating each other, and you get – well, you get overwhelmed.

On opening night a few weeks ago at New York City’s Albertz Benda gallery, she explains how the film – and the whole show – is a call to women to own their space.

“I get nervous about talking too generally about these things, but it has been my experience that men are more intrinsically confident in spaces: in vocational spaces, in personal spaces,” she says. “It’s something I'd love to keep saying to women. Often we are too polite about our strengths.”

This message extends across Barton’s set of collages, inside another land, and a series of new paintings in her signature style. Women’s most vulnerable and intimate moments, she says, are also sites of power and safety.

The show’s title work, like Red, uses nature to drive this home.

When Barton was in her twenties, she dated an American and spent a lot of time in California, drawing local animals and reading about Native American culture. “There is this idea of the hare as the custodian of innocence,” she explains. “I was spending a lot of time at that stage in my life drawing bunnies juxtaposed with private physical spaces for women, like vaginas. It's the first time that I've revisited that idea.”

There’s nature and there’s folklore. And Barton draws them together with a third element: fashion. From her collaborations with Sydney label Romance Was Born (whose models wore Barton’s designs to close Australian Fashion Week in May) and the Armani suits in Red, to the garments in her collages and her bowerbird-like personal style, Barton doesn’t believe in delineating fashion from “serious” art. “I always find categorisation so tedious,” she says. “Everything's collapsing in a really great way.”

She’s in New York at a good time. Brooklyn Museum’s Georgia O’Keeffe retrospective gives as much prominence to O’Keeffe’s wardrobe as her work, acknowledging that creative work does not exist in a vacuum – it’s informed by daily aesthetics, and vice versa.

When we speak, Barton has just come from a last look at the Barneys May window display, which featured a mash-up of Comme des Garçons designer Rei Kawakubo and iconic sculptural artist Louise Bourgeois. Like Barton, neither has ever been scared to blur different mediums and get a bit weird. “This radical juxtaposition between the body suits, and the performance and sculptural work,” she says. “For me, that is the conversation between fine art and fashion at its very best.”

All that said, Barton is hyperaware of the different demands of each arena. “Even though I think it can all fold into each other, and grow each other, I think what's unique to each discipline and practice will never be lost,” she says. The fast pace of seasonal fashion, for example, can be at odds with the painstaking perfectionism an artist is able to apply in the studio. And working in film has its own challenges – of which production expenses are just the start.

So she happily depends on collaboration – even though it doesn’t come naturally. “At the end of the day, although I can fake it, I am quite introverted. But it’s all about relationships and working with the right people. I am a very inexperienced director, but I’m a confident creative. So it's just finding people who respect and understand that and are excited about that.”

Del Kathryn Barton’s r u a bunny? is at Albertz Benda gallery in New York City until July 14, 2017. Entry is free. 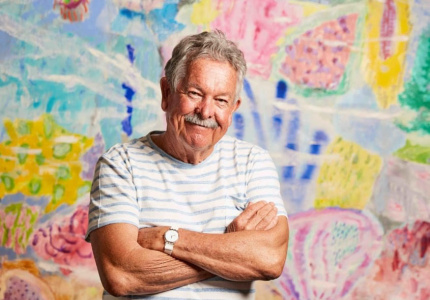