The Peculiar Parallel Lives of Hans and Nora Heysen

Hans and Nora may have shared a last name, but their experience of the art world was completely different. In partnership with the NGV, we discover how father and daughter explored the social and cultural evolution of 20th-century Australian life. 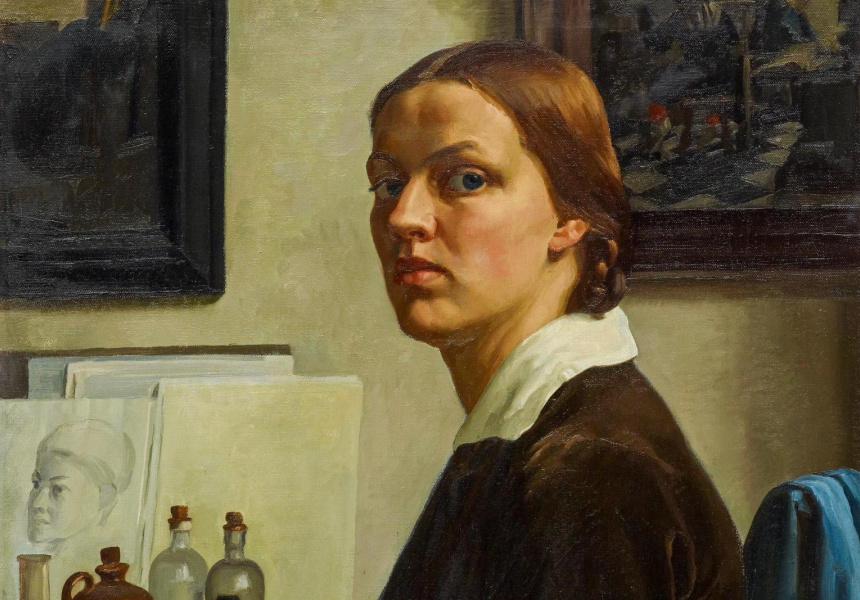 “It’s such a fascinating story,” says Dr Angela Hesson, curator of the exhibition at the NGV presenting the work of both Hans and Nora Heysen. “Not just as a microcosm of Australian art history, but much more broadly as a way of thinking about Australian social history and the changes in the artistic climate over that time.”

She’s right: the work of both Heysens – though it ranges in subject and style, spanning decades marked by tumultuous change – has a lot to say about the social and cultural evolution of 20th -century Australia.

Of the two, Hans is certainly more renowned, now recognised as one of Australia’s foremost turn-of-the-century landscape artists. His daughter Nora, though she was the first woman appointed an official war artist, and the first female winner of the Archibald Prize, is lesser known (and lesser shown).

Although there have been countless exhibitions of Hans’s work, Hesson tells me there has never been a major show that brings the two together, presenting their diametrically opposed thematic concerns alongside fascinating similarities in thought and process. “It’s one of those things that, when you think about it, is slightly overdue,” says Hesson.

Hans Heysen’s career spans two world wars. “The work dates from before the First World War, when he is under official police surveillance and his work is being excluded from major exhibitions, to after the Second World War, when his daughter is appointed an official war artist,” says Hesson. Quite the transformation for one family to undertake – and useful, as Hesson points out, for understanding Australia’s national identity.

The long-awaited exhibition involved collating not just Hans and Nora’s artistic work, but also their letters to one other and a few cherished possessions from their family home in Hahndorf, The Cedars. The correspondence, Hesson explains, reveals hidden aspects of the Heysens’ politics and practices.

“One of the things that was such an exciting discovery for me was seeing how passionately connected to nature both the artists were. People can look at Hans’s work and think, ‘dry, somewhat nationalist Australian landscape [painting]’,” Hesson says. “And then you actually read his letters and you look closely at the work and discover they are completely infused with love for nature and for the landscape.”

Hesson tells me Hans was a passionate conservationist, paying councils not to cut down trees in the areas he visited for work and inspiration. “I think all of that really enlivens the paintings, and makes them seem – rather than stuffy – highly progressive.”

Nora, a painter with a more modern style and outlook than her father, preferred portraiture and flower-filled still life. “Nora’s flower painting has the same inflection,” Hesson says. “She wrote once that painting a flower was like a prayer. It was such a magical idea for these two very traditional genres of painting.”

Hesson tips Nora’s self-portraits as some of the most exciting work to see in the flesh. “There’s such an intensity to them, a heroic quality. They’re really wonderful.” But for Hesson, the entire exhibition is an opportunity to put both artists’ work into a new context, reframing pieces that were previously overlooked.

“Hans Heysen has often been positioned as a very conservative painter,” she says, “And in some ways that’s been to his detriment. But he was passionate and environmentally conscious, and he experimented with all different media. I think there’s actually a lot more transformation and evolution in his work than has been acknowledged.”

Nora’s profound influence on the work of Australian women artists is due for some recontextualising too, Hesson suggests, joking that the formidable portraitist was “a reluctant icon” in her time.

“She occupied these major firsts – but she never really wanted to talk about gender,” she says. “She’s quoted late in life as saying, ‘I’m not a feminist’, which is one of those quotes that can be frustrating when you look back on her life, because she’s a real case study in women’s independence.

“But I think semantically she wasn’t comfortable with that word, and she wanted to be seen as an artist first and foremost, removed from an idea of gender. And she was frustrated with the media’s preoccupation with her family. She felt that both of those things eclipsed her painting in some way. There’s a quote from her in the 1960s - ‘I don’t know if I exist in my own right’. Nevertheless, she is an extraordinarily strong figure.”

The NGV has snagged some incredible pieces from the Heysens’ Hahndorf home. Hesson’s favourite is an old caravan from 1926, in which Hans travelled through the Flinders Ranges, painting some of his most revered work. “It’s a very basic but lovely handmade thing,” she says. “It gives a sense of how his practice actually was – that he was embedded in the landscape.”

Hans and Nora Heysen: Two Generations of Australian Art is on from March 8 to July 28.