It’s a little slice of Italy in Melbourne’s east – and the aesthetics are just as important as the salumi. In partnership with the stylish new Ford Puma SUV, we speak to designer Sarah Cosentino about the Southern Italian-influenced decor at the deli-restaurant hybrid, Via Porta. 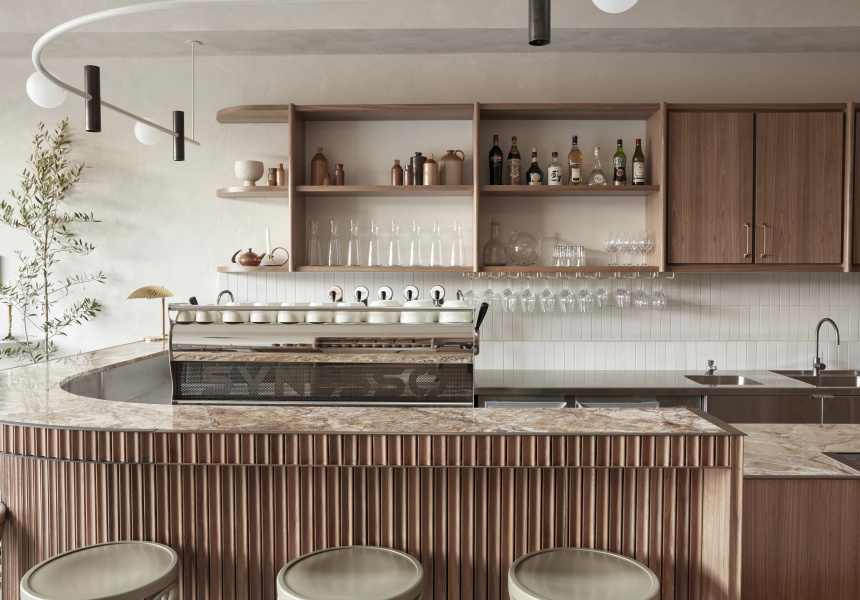 When you step through the front door at Via Porta in Melbourne’s eastern suburbs, you suddenly find yourself transported into a laneway in Southern Italy.

Via Porta is a deli-slash-eatery run by the Cosentino siblings in Mont Albert, the suburb where they grew up. Brothers Simon and Ryan, both chefs who have worked in Michelin-starred restaurants, run the kitchen. Front of house is the Jonathan’s domain, while the venue’s design fell to Sarah, who runs architecture and interior design firm Studio Esteta. The long, narrow site on Whitehorse Road recalls “the beautiful labyrinth of old laneways that you find in Europe, with the cobblestone streets and abundance of activity and culture”, which Sarah says formed another point of reference in her design (more on that later).

The siblings conceived Via Porta as “an extension of our family kitchen”, says Sarah. The design, from top to bottom, reflects the family’s Italian roots – the Cosentinos’ grandparents emigrated to Australia from Sicily and Basilicata in Southern Italy. It’s one of those stylish spaces you want to linger in for as long as possible.

The interior’s earthy hues “were inspired by those beautiful rural landscapes that you come across in Puglia in Southern Italy, where you’ve got that rusty coloured soil and abundance of olive groves”, says Sarah. “The idea with the overall palette was to create a sense of warmth that was to be an inviting space, not intimidating.”

Acclaimed 20th-century Italian architect Carlo Scarpa, known for his virtuosic renovation of Verona’s historic Museo Castelvecchio, served as another lodestar. Scarpa’s preference for simple tones and contrasting textures inspired elements of Via Porta’s design. The space “was to be quite neutral, but it had to have depth to it”, says Sarah. “So there’s an array of contrasting textures – the warmth of the timber, the rendered wall finishes, the crazy paving which is made from offcuts of marble in neutral tones, shades of olive green and rust, and the limestone-clad deli front.”

Via Porta’s coffee bar is “heavily detailed and features beautiful warm timbers, intricate detailing, and honeycomb-toned marble” – an homage, Sarah says, to Italy’s ubiquitous espresso bars. The flagstone floor and a Juliet balcony on the mezzanine level overlooking the downstairs space add to the interior’s laneway feel. “From an operational and functional point of view, the Juliet balcony creates a beautiful connection to the upstairs dining area, which would otherwise feel quite disconnected,” says Sarah. Viewed from the mezzanine, she says, the balcony “creates a beautiful vista and a sense of openness”.

However meticulous Sarah’s treatment of materials and method, like in a gallery the design had to remain subtle enough not to dominate the space. “We didn’t want the design aesthetic to take over from the retail offering and all the beautiful products it was to showcase – we’ve got products from all over Italy as well as our house-made products,” she says.

Establishing a balance between the retail and hospitality aspects of the business required a design that was both flexible and versatile. It meant that when the pandemic hit, “the boys were able to quickly pivot from that dine-in offering to a full retail and wholesale arrangement”, says Sarah. They expanded their takeaway menu and converted the lower-level basement into a pastry production centre to supply other cafes. “We were fortunate we had that infrastructure in place to make such a quick transition.”

The project “was a long time in the making”, Sarah notes. “It was probably two years from inception to completion. It was an existing site that needed a lot of work to bring it up to scratch.” That work included an extension of the mezzanine level, a new roof and service upgrade – all before the fit-out even began, which meant that the “budget was an ongoing challenge”.

As you might expect with four strong-willed siblings working together on a joint project, there was plenty of robust discussion throughout the planning and design phases. “We’re all really passionate about what we do, and we have strong opinions – and we’re also Italian – and that can be challenging,” says Sarah.

The final product – a design that is coherent and aesthetically spectacular, and flows well operationally – is a testament to the individual strengths of the four siblings. “We were able to bring together all those pieces of the puzzle,” Sarah says. “There were many arguments along the way, but we’re fortunate that we have a relationship where we can speak our minds.”