Whether it’s a pile of soup dumplings, a slurpable bowl of noods, a cascading chocolate fountain – or just about anything else – out-of-work tattoo artist Jeff Segundo can drop you in it with his cheeky, brightly coloured portraits. 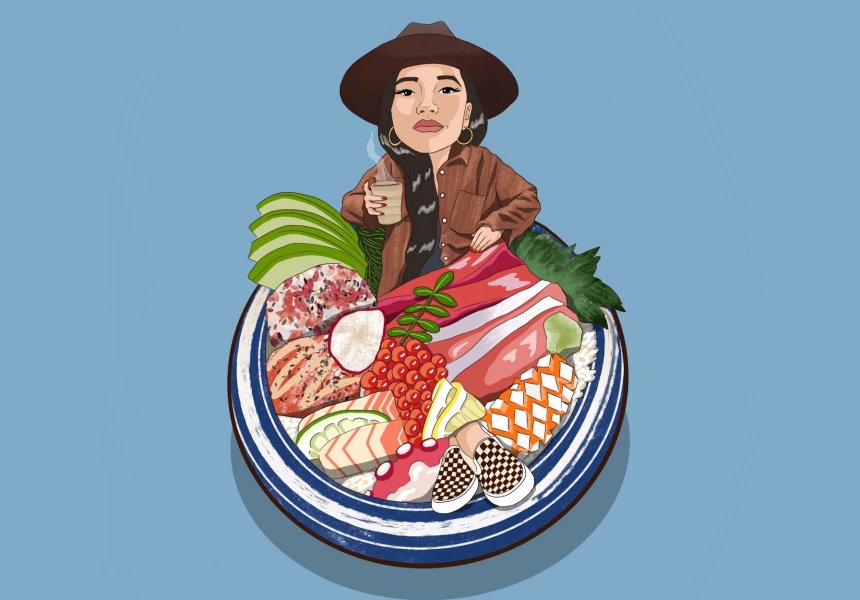 The premise is simple: it’s people illustrated in and around their favourite foods.

There’s a man riding on the back of a lobster, trident in hand, his luscious locks flowing; a slurpable bowl of noodles populated by Studio Ghibli characters; and a woman sitting in a bamboo steamer, surrounded by piping hot xiao long bao – which is the portrait that started it all.

It might just look like a bit of fun, but Melbourne tattoo artist Jeff Segundo is trying to bring some light into an otherwise fairly dark year. In the wake of Covid-19 – and its resultant lockdowns and travel bans – Segundo found himself out of work and trapped on the other side of the world from his girlfriend, Nicole Phung. And so, to cheer her up, he drew her in a pile of soup dumplings. From there, he tells Broadsheet, “it was just a snowball effect”.

He started drawing friends, then friends of friends, and then more and more requests started coming in. So, together with Phung, he launched Big Food Mood.

The project has been a new but exciting challenge for the artist, who also previously worked as a graphic designer. “I feel like my style in tattooing has got nothing to do with the portraiture,” he says. Instead, his pieces lean more toward caricature – they’re brightly coloured, energetic and joyous.

He draws inspiration from unexpected sources: Colors, a Youtube channel featuring up-and-coming musos (as well as the occasional big name) performing against solid-colour backdrops; Gudetama, a Japanese cartoon centred around a “lazy” egg; and Studio Ghibli – “[the food] just makes you hungry!” he says.

But each portrait is the result of close collaboration with the client. Segundo asks them to put forward a few favourite foods, then thinks about what extra touches the piece needs. Maybe they’re doing a handstand while dipping a strawberry into a chocolate fountain, or perhaps they’re surfing on a snap pea, or meditating (and levitating) above a stacked acai bowl. “I just wanted to keep it kind of funny, you know?” he says, with a laugh.

While Segundo is looking forward to eventually getting back to tattooing, the end of lockdown won’t mean the end of Big Food Mood. “I want to keep doing this,” he says. “I feel like it’s just another creative avenue for me that I can explore, and possibly take further.”

To commission Segundo, contact him via Instagram or email. It’s $150 for one dish with one person, $50 per additional dish or person, and $20 for a pet.