Including coffee tables made from polished pink concrete, terrazzo, glass and marble. Next up? A line of bold, fun seating and chunky, one-of-a-kind platters. 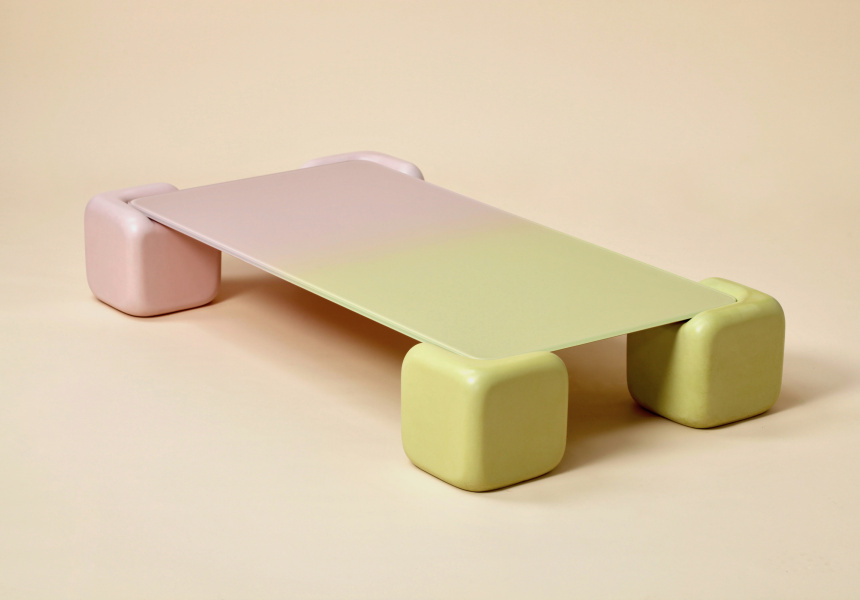 The story of Studio Mignone is one that spans decades, generations and countries for designer-maker couple Isabella Wood and Aldo Mignone. Before starting their business in 2018, Wood and Mignone were living in a 1920s apartment in Sydney’s Potts Point. In its terrazzo-laden foyer, their love for the speckled material was born – a love that grew stronger during a trip to Italy (the birthplace of Mignone’s mother), “where we were inspired by everything,” says Wood.

“We loved how this material had come in and out of fashion in the ’20s, ’50s and ’80s and that terrazzo and palladiana were also a way to use up marble waste,” she says.

After an engagement, a baby daughter and many grand design ideas, the couple moved to Adelaide. Then, in a shed near the family property in Norwood not far where Mignone grew up, next door to Nonno Mignone and around the corner from Mignone’s parents, their terrazzo-table plans became, well, concrete.

The couple make one-of-a-kind furniture and homewares, simultaneously reminiscent of lollies and fairy floss, and ancient European creations like Roman columns and Michelangelo’s David. There are ovals of glass atop mismatched half-moon-shaped pillars made from polished pink-pigmented concrete and white terrazzo speckled with burgundy granite and green epidote; thick, black-marble sculptural platters adorned with chunks of colourful concrete; solid octagonal and square stands, almost too pretty to put a cake on; and the latest beauty – the Tavolo Morbido Table.

They’re currently working on a new concrete-pillar table design, and a new series of chunky square and rectangular platters that will be launched in the coming months. Each one is an original, one-of-a-kind piece: equal parts art and function (they’re just begging to have fragrances, beauty products, jewellery and luxe candles placed on them). The next big release is seating. “There’s still a way to go, but [the seating] is going to be bold, graphic and fun,” says Wood.

The couple say they bring complementary creative abilities: “[He’s] the workshop muscle,” says Wood. “And I’m the driving force behind the creative direction.

“The designing, sourcing, making, building, refining, producing, photography, marketing, social, branding. It is all us,” she adds. “We work well together because we both feel strongly about creating original, experimental pieces of functional art that will be cherished and collected by people for decades to come.”

Living and working together isn’t without “lots of arguments, lots of questioning and lots of tearing down each other’s ideas,” says Wood. “It’s brutal yet loving.”

While they are happy working from their shed in Norwood for now, surrounded by family and Nonno’s terrazzo garden beds, they’re not counting out the possibility of opening a shop one day.