There are bold red-and-green bedspreads with foral motifs, pastel-hued cushions illustrated with traditional Dreamtime scenes, quilt covers with line art depicting wind, and five more designs across a range of homewares. And all profits are split equally between the two women-led businesses. 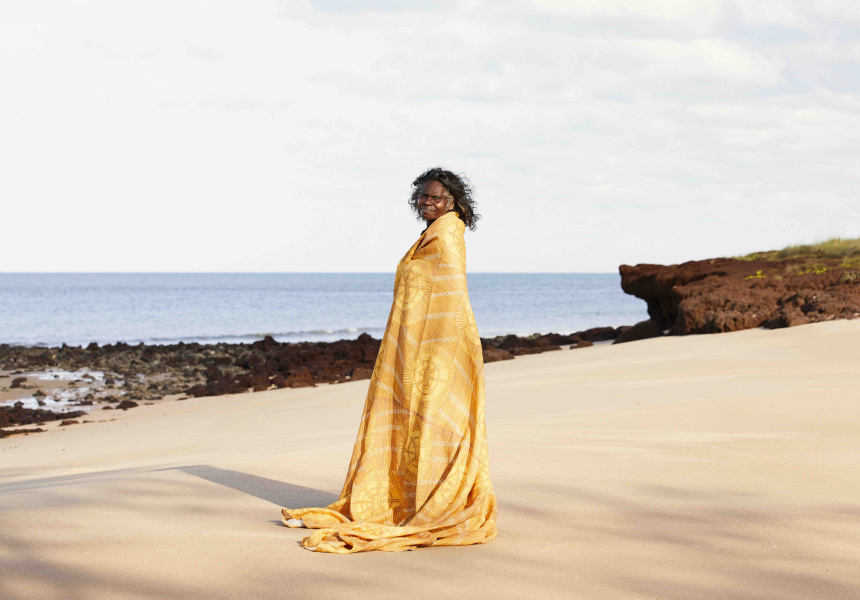 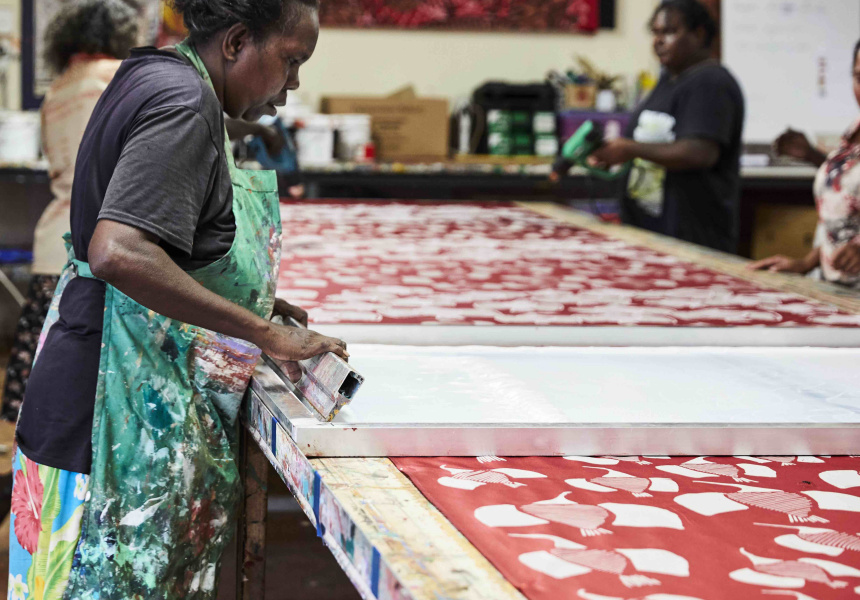 Two years ago, the founders of Kip & Co received a special email. It was from Bábbarra Women’s Centre, located in the remote community of Maningrida in Arnhem Land, and they wanted to collaborate.

The centre was established in 1983 as a safe space for women, and it now supports local artists who specialise in textile design and manufacturing, helping to facilitate financial independence. It houses one of the oldest continuously operating Indigenous textile workshops in Australia, and last year five artists exhibited their works in Paris.

“We know that when women are financially empowered, the flow on effects for children and families are significant,” says Jessica Phillips, the first local Indigenous manager of the centre.

The women, who had wanted their work to be featured on a bed linen range, decided to contact Kip & Co because it's also also owned and run by women, as well as making homewares with a commitment to responsible sourcing and sustainable practices.

Kip & Co co-founder Alex McCabe says they were very excited about the project. “The women at the centre make the fabric themselves and have a really awesome colour aesthetic and use really bright, vibrant, clashing colours, and that was one of the things we loved about them when they reached out,” McCabe tells Broadsheet. “So we’ve tried to be true to that and the colours of the women in their own art.”

A pastel design painted with vines, long-necked turtles and freshwater fish by Margot Gurawiliwili depicts a traditional Dreaming from her home of Mankorlod. Janet Marawarr’s line art depicts kunkurra, a spiralling wind. And Deborah Wurrkidj has created a bold green-and-red design featuring the manwak flower, which grows near a creek on her homeland (the kernel looks and tastes a bit like a spicy strawberry).

The artists were consulted through every step of the creative process, from the colourways and fabrics to what products their designs would be printed on. Bábbarra Women’s Centre also enlisted the services of Copyright Agency, a not-for-profit that represents creatives and protects their interests.

“Ultimately it’s their art, so we were very conscious that we had a huge responsibility in dealing with artwork that had cultural significance, so you really need the artists to lead,” McCabe says.

Several designs and products have already sold out, but Kip & Co has signed an agreement with Bábbarra to make more – most likely in 2020. Profits from the collection are being split evenly between the two women-led businesses.

In February, McCabe and Kip & Co co-founders Kate Heppell and Hayley Pannekoecke travelled to Maningrida with their kids. After two years spent working on the collection, they were able to show the artists the final products for the first time and photograph them with their pieces on Country.

“You need to get a permit to visit Maningrida so we were already very lucky to be there, and now in hindsight – it was just before lockdown – we were even more lucky, really,” says McCabe. “It was nice to go out on Country and meet them in a relaxed environment, chilling out under the trees and having a laugh at us trying to lug an air mattress and props on the beach. It felt pretty special.”