The Melbourne designer melds art and science in her work with algae-based bioplastic. In partnership with Campari, we find out how she turned her passion for sustainability into real world vessels of unique and useful beauty. 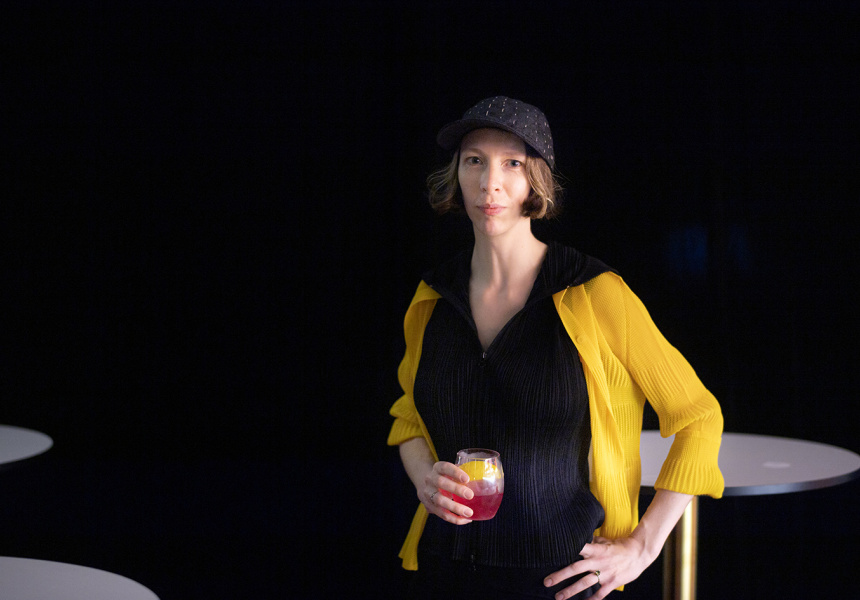 Dismayed by the growing climate crisis and frustrated by the inaction of decision-makers, Melbourne-based artist and designer Jessie French decided to do something about it. Using art. Her humble mission? Find a solution to the world’s plastic waste problem.

Sustainability is the “central theme of what I’m doing”, says French, who creates objects and artworks using algae-based bioplastic.

She started experimenting in her kitchen with different recipes for bioplastics. Her goal was to “work out a way to enact bottom-up change” by creating an eco-friendly plastic alternative and, in doing so, paving the way to a post-petrochemical world.

“Initially, when I was starting this project, it was a speculative work about a future where we could be using these different kinds of plastics,” says French. “Happily, it ended up that the polymer (made from red seaweeds gelidium and gracilaria) has been really successful, and I’m able to use it in the real world as well.”

The result is a range of bioplastics that French has used to create sheetworks, some of which appear in the 23rd Biennale of Sydney at the National Art School, and in a live lab at the Cutaway at Barangaroo. Also appearing in her Biennale installation will be “a couple of bioreactors bubbling away”, filled with the microalgae (Arthrospira platensis – a freshwater variety of spirulina) that French uses as pigment in her work.

“I’ll be there at various stages during the exhibition to add to what I’m calling a patchwork, which is a number of different smaller sheets that I’m making within the exhibition and fixing to a glass pane,” she says.

One of French’s new pieces has also been acquired by Campari for the Biennale’s Galleria Campari, located at the Cutaway. The algae-based sheetwork is installed in the space, illuminated by the bar.

"It’s the first example of a new technical application of colour,” says French. “The pieces within the artwork are formed with a liquid material application of a mix of colours. The shapes and sweeping tones that wash over the work are unique in the method of production as well as the one-off nature of the work."

To make her bioplastic, French uses a type of red seaweed sourced predominantly from Morocco. In 2019, French travelled to Morocco to undertake a residency 45 minutes’ north of Marrakech.

“It was phenomenal being over there and seeing where it all comes from and meet the people responsible for processing the products I’m using,” she says. “I spent a lot of time researching the supply chains, chatting to a whole bunch of different people – independent researchers, marine biologists and people in the field – and doing research to make sure the harvesting of this product is sustainable. And it is.”

She returned home in March 2020, a week before the nation went into lockdown in response to the Covid-19 pandemic. “I came back to a very different world,” French says.

But she’s used the time at home to perfect the process of producing the algae-based material, which she says is relatively simple.

However, working with an entirely new material poses unique challenges. “When you use clays or paints or an established medium, there’s a whole bunch of places you can go to for information on how to use them, how to get the effects you want and how to do different things,” she says. “I was starting from scratch, with not just the work I was making but also the materials.”

French’s sheetworks are not her only contribution to the Biennale. Her bioplastic is “closed loop”, which means it can be melted down and turned into new objects. “I’ve made some of the exhibition design components,” she says. “[Things like having] replaced some unsustainable materials with bioplastic sheets [that] I’ve made really heavy, so they can be used instead of block-out curtains,” she says.

“The beautiful thing about those is after the Biennale they’ll be returned to my studio, and I’ll cook them down again and use them for something else. Exhibitions usually go for a couple of months, max, and a lot of materials are thrown out after that. So having sustainable material options in a range of industries is really important.”

In 2021, French launched a separate design studio to work with clients on commercial projects using her algae-based bioplastic. It’s an “experimental” studio, says French, which means much of the work she does for clients is research and development. One current project involves “experimenting with the material to possibly replace vinyl lettering in exhibition and retail”, she says. “Often creatives and other artists are interested in having access to a sustainable material.”

This article is produced by Broadsheet in partnership with Campari. See Jessie French’s work at the Biennale of Sydney, including at Galleria Campari, open late every Wednesday until 9pm.