An extension by Adelaide design firm Sans-Arc Studio put this early 20th-century suburban home on the national map. The cool, contemporary and colourful renovation is defined by pink terrazzo, archways, and a plaster-clad exterior, which earned it the name Plaster Fun House. 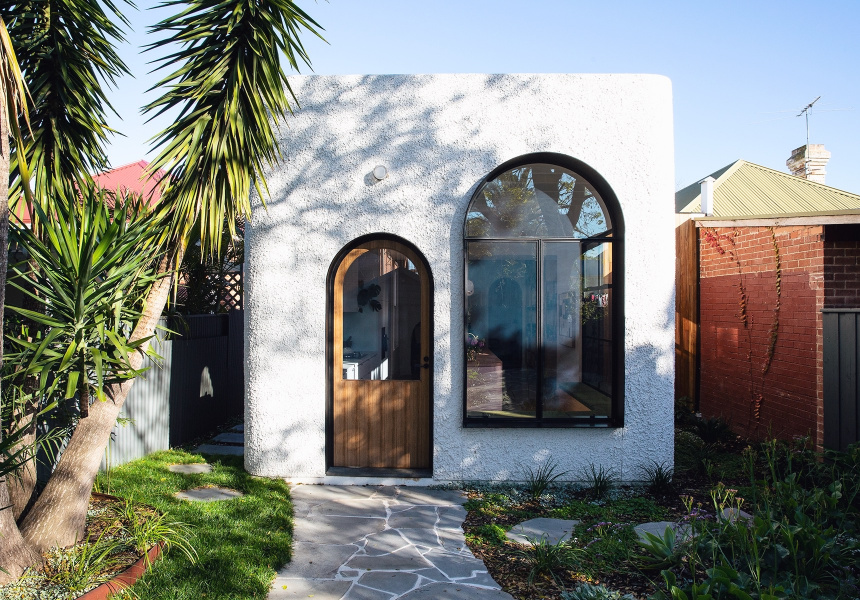 Janaki Benson’s love of Italian and Czech glassware began as a kid. “When I was little my grandma would take me to op shops [and] they just grabbed me,” she tells Broadsheet. “I was drawn to the colours and the shapes – they’re quite bold and striking.”

Until recently, her extensive, colourful collection was strewn throughout her two-bedroom Torrensville cottage, in Adelaide’s inner west. “It was just, like, clutter.”

The eclectic pieces now sit pride of place, alongside records, books and West German pottery she and husband Rohan Siegele have amassed over the years, on a wooden display shelf in their newly extended living room. “In regards to decorating, I don’t overthink it,” says Benson. “If I love it, it goes in!”

The bookshelf is a small part of a stunning new addition by Adelaide design firm Sans-Arc Studio (Pink Moon Saloon, Malt & Juniper). As a town planner, Benson had come across Sans-Arc co-director Matiya Marovich’s work many times before. “I’d worked with Matiya on a few other jobs he was doing in the city and I was drawn to his style,” she says.

The house, which dates back to 1910, now features a contemporary and colourful extension comprising a new kitchen and dining area and renovated bathroom and laundry. The living area is defined by a long pink terrazzo bench, multiple archways, and a plaster-clad exterior, which earned it the name Plaster Fun House by the designers.

Benson and Siegele – a solution architect – had no strict brief for Sans-Arc. “It was more a feeling, which sounds a bit wanky,” says Benson, “rather than, ‘We want a particular look or style’. We left it quite open … it was more, ‘[we want] light, space, a place for us to relax and entertain’.”

The result is fun, functional and full of sunlight that streams onto a cosy new reading nook. The kitchen and renovated bathroom feature beautiful duck-egg-blue cabinetry and tiling. “We once heard Matiya describe it as ‘Flintstones-Art Deco’,” says Benson. “I think that’s pretty accurate.”

Names: Janaki Benson and Rohan Siegele
Live: In a single-fronted sandstone maisonette in Torrensville
Since: 2007
With who: Our cat Mr G

Have you made any changes since you moved in?
Yes, we demolished the dark 1990s lean-to comprising the kitchen, laundry and bathroom. Then we constructed a single-storey addition comprising a new kitchen/dining area, larger bathroom and laundry. The idea was to create an open, light-filled space that was multi-functional.

What made you fall in love with the house in the first place?
The house had good bones and was in a great area close to to the city.

Favourite room in the house?
The new dining and kitchen area of course! Our favourite thing to do on the weekend (and most nights) is to hang out in this space and have a coffee/wine/cocktail, cook, listen to music, talk shit or read.

Favourite items in the house?
The Izzo Valexia Duetto coffee machine for obvious reasons (but it also looks pretty!) and our Italian/Czech glass and West German pottery collections.

Favourite places to find homewares and art?
We like to shop everywhere but Ebay definitely is a favourite for unique pieces, especially Italian/Czech glass. We recently bought some art by Australian artists from Modern Times in Melbourne and from Egg and Dart in NSW.

“Home Visit” is a Broadsheet series exploring homes across Australia.