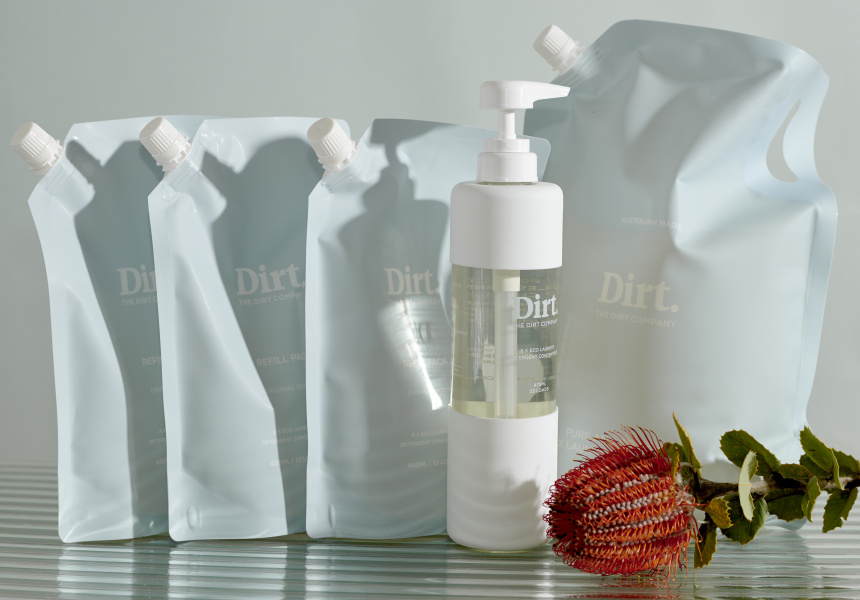 One of Frankie Layton’s first jobs out of high school was working as a stewardess on a superyacht. “We used to just chuck the rubbish straight overboard,” she says. “It’s this scene where you have 50 dolphins bowing at the front of the boat and the deckhands at the back, just chucking the rubbish overboard.”

Law reform has meant this is now illegal, but it did inspire Layton to want to launch a company. “I had no idea what it was going to be, but I always knew it was about removing trash from the ocean.”

In 2016, after a stint in advertising in Germany, Layton returned to Australia. “The epiphany for the laundry detergent [arrived] one day walking down the laundry aisle,” she explains. “I remember we came back from a festival and [beforehand] I’d bought a litre of detergent. By the time I got home, my housemate had used it all because the concentrate was so extremely diluted. I couldn’t ascertain just how much I was paying for such a small amount of product because it was all blown up into this big product to sell me more and more.”

That’s when Layton’s attention turned to the laundry industry. She noticed how the cleaning aisles are predominantly marketed to women. She recognised, for the most part, that eco alternatives weren’t expected to wash well. And that most products contained extremely diluted formulas because bigger was better.

And so, she launched the Dirt Company, a high-performing laundry concentrate that’s great for your clothes, your skin, the planet and your wallet.

Layton says the Dirt Company laundry-detergent formula is eight times more concentrated than the detergent you’d typically find at the supermarket. “There’s less water in our formula, which also means there’s less of a carbon footprint.”

She says the world of natural and sustainable isn’t always clear cut. Whether you’re creating products or using them, you can choose either synthesised, petroleum-based ingredients, or ones created with more organic elements. The active cleaning ingredients Dirt uses are plant-based and/or organic, but each one is chosen because it still has robust cleaning power.

“When it comes to the world of green, it’s not always a straight line. So [we’re] just striking that balance between ‘you need it to work, [and] you need it to be as natural as possible.’” That means making use of organic enzymes and natural fragrances such as essential oils.

But the primary difference is in the Dirt Company packaging. The detergent comes in a dispenser bottle, which has a pump, so you can measure your dosage and avoid overdoing it. (Large doses are a manufacturer trick encouraging customers to purchase products more regularly, Layton says).

The dispenser bottle can then be refilled by buying the Dirt Company’s refill pack. The refill packs contain 90 per cent less plastic than a standard 20-load bottle of detergent on a per load basis. “But if you want to take it one step further, you can also return the refill pack to us. We sanitise them, refill them, then send them out to customers who are part of that program,” Layton says.

(The Dirt Company also donates 50 per cent of its profits to The Ocean Cleanup, an organisation working to pull plastic out of our oceans.)

Since launching, according to a count of all refill packs sold, the Dirt Company claims to have saved more than 151,000 plastic bottles from ever being manufactured. That translates to about 12 solid tonnes of plastic that was never created or never used because of the Dirt Company’s closed-loop model.

“When you’re sitting in our shoes and calculating it all up, it really is a big impact that it’s making and something we’re proud of,” Layton says.