On a windy hilltop block, the Daylesford Longhouse is a warren of indoor gardens, private spaces and communal areas that fit together like a puzzle to create one cohesive space. It’s home to Ronnen Goren of Studio Onograto, his partner Trace Streeter and a handful of dogs, cows, pigs and ducks. 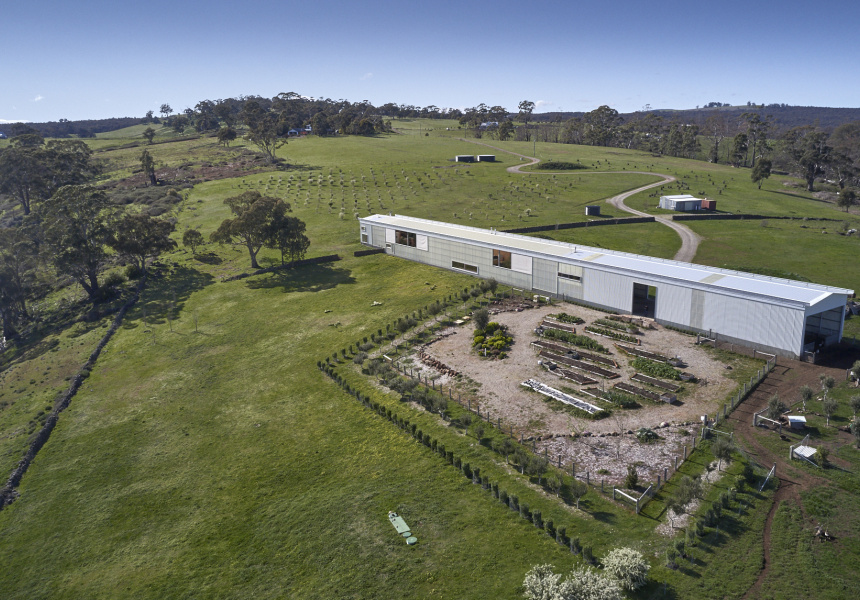 In 2009, after dating long-distance for three years, Ronnen Goren and Trace Streeter uprooted their lives and moved to Daylesford – around an hour-and-a-half north-west of Melbourne – where they’d bought an eight-hectare block on a windy hilltop.

“As a gay couple with no kids, we were interested in exploring a new way of living,” says Goren. “Trace comes from a gardening family and had small acreage farms. He’s been into self-sufficiency since high school.”

From the outside it looks more like an agricultural shed than a home, but inside it’s a warren of indoor gardens, private spaces and living quarters for farm workers and volunteers.

Communal areas allow the couple to host cooking classes and other workshops, and while each section is distinct, the interior and exterior elements fit together like a puzzle to create one cohesive space.

“With all the internal gardens it’s like a little village all under one roof,” Goren says. “It’s imbued with intricate details, textures and warm timbers – from the cypress in the internal garden space to the incredible rosewood used in the window frames, doors and furniture – and everything’s been designed and integrated in a way that there were only a few pieces of furniture that we had to buy.”

There’s a consistent rawness to the house too, which doesn’t just stem from its numerous indoor gardens. The bathroom was built using white-glazed terracotta bricks, and some timber surfaces are unfinished and rough. Mindfulness was a design consideration too. Light pours in through transparent roofing and light wells, and there’s a hidden day bed at one end of the house.

Streeter manages the farm and gardens, and Goren splits his time between the farm and his work running creative firm Studio Ongarato in Melbourne. Goren comes from a family of hospitality workers, so food and cooking has always been part of his life.

“[Streeter] and I had a shared interest in sustainable living, and a passion for farming and cooking, and to explore our interest in a true paddock-to-plate lifestyle,” Goren says. “And a want for a new life together that we could both own. Not just a home turf.”

Have you made any changes architecturally since you moved in?
None at all. It’s been so well conceived by Timothy [Hill, of Partners Hill]. The house isn’t style driven; rather it’s about a beautiful setting with incredible amenity for interactions.

The house cleverly deals with a broad range of sustainability and climatic challenges and is smart – it provides us with shelter from the harsh winds, being on a hill, while harvesting a significant amount of water, which we store.

It’s always verdant and comfortable all year round, being a passive [ultra-low energy] house in parts. Being collectors of things, there are considerable spaces to style and exhibit our collections of pottery and art.

Favourite room in the house?
The garden kitchen, where I spend a lot of time cooking and socialising. And Trace loves the space in front of the lodge where we’ve created a beautiful native rock garden.

Colour, too, is one of the amazing facets of the house. The pop of colour when you arrive into the living areas provides uplift all year round, but most of all when we need it through the long, cold, grey Daylesford winters.

Favourite item in the house?
Our set of two rare Aldo Londi [of Italian ceramics studio Bitossi Ceramiche] sculptures that are limited-edition. Trace’s pick is Clara, one of our dairy cows.

Favourite homeware stores?
Over the years we’ve been drawn to – and bought – beautiful things from Geoffrey Hatty, Angelucci 20th Century, auction house Leonard Joel in Melbourne, and 1stdibs. And eBay has also been a consistent source, too. 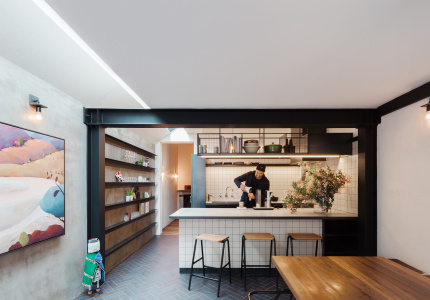