We visited the Bangalow home and Byron Bay showroom of the couple behind homewares brand, Pampa. 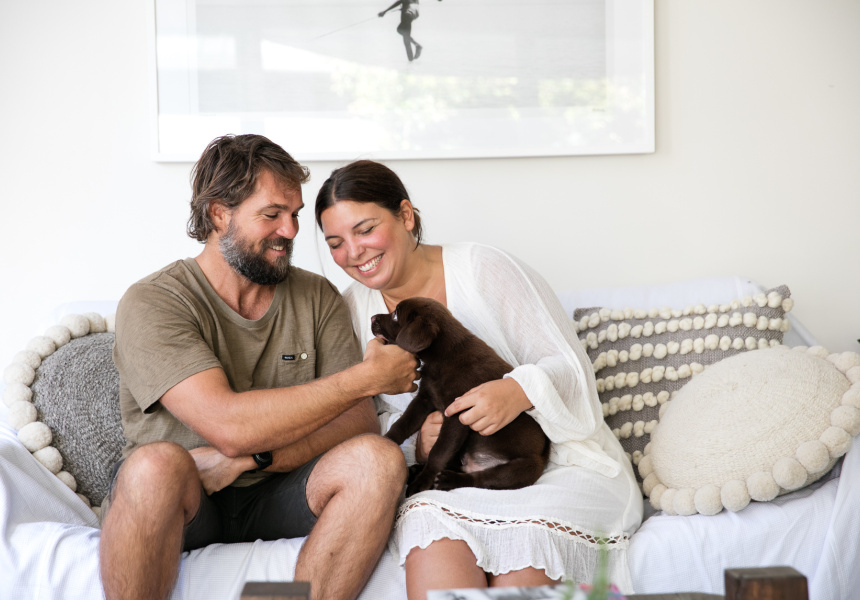 Vicky Aguirre and Carl Wilson met in Chile. Aguirre, an Argentinian, was on assignment as a photographer covering a couple of Argentinian surfers exploring Latin America’s Pacific coast. Wilson, an Australian, was surfing alongside them; but the couple only crossed paths when they stopped in at McDonald's to use the Wi-Fi.

A mutual love of photography and the South American landscape drew them together. “The first big move for us was that we bought a tent together,” Aguirre laughs. “It was a really good tent too so we knew the relationship was serious.” They spent a month camping in the Atacama Desert, and it was then that Aguirre decided to move to Australia.

But she soon developed a deep homesickness for Argentina, and would look longingly at photographs she had taken back home, feeling the sense of loss that comes with separation from family and culture. “When I first arrived I continued shooting local content here for South American publications, but it soon became clear that had an end point. I would need to find new work, and in Argentina, Carl and I had spoken about launching a business together.”

Their idea was to work with the remote Argentinian communities that have been weaving rugs for centuries, to develop a collection and find an international market for it. The brand Pampa was born in 2013 and since then they have worked with communities across Argentina and Chile to develop several collections, working to each group's specific knowledge and techniques.

“It can be tricky putting together collections in this way,” Wilson says. “Some of these communities have woven the same specific pattern their whole lives; it's the way they know how to do it, so you can’t come in and show them what you want made. Whereas other communities are really open to learning new techniques – our relationships with each community are completely unique in this way.”

Building this kind of grassroots business means a lot of time is spent fostering relationships, travelling to each community, investing the money and then waiting, sometimes a long time, for the weavings to be ready for collection. When they first began Pampa, Aguirre and Wilson would fly over several times a year, but as their business has grown it’s become harder to travel. Now, Aguirre’s brother manages the relationships with the communities on ground in Argentina.

Pampa offers a wide selection of handwoven rugs, throws and cushions in deep earthen colourways and traditional patterns. They also sell Aguirre’s photographic prints from several series of works. “Aguirre has finally let some of my photos in now too,” Wilson jokes, pointing at a large landscape print of mountains in Northern Argentina that is hanging on the showroom wall.

Pampa textiles are woven with Argentinian sheep’s wool and pure llama’s wool – each piece is strikingly individual, rich with texture and the homely smell of natural wool. The Pampa team works out of an office above the showroom it shares with Pop & Scott in Byron Bay. From here it manages online and showroom sales, as well as a growing list of Australian and international stockists. “A lot of our customers are Argentinians who have migrated to other countries,” Aguirre says. “I think being able to bring the Argentinian aesthetic into their homes in a modern way really appeals to them.”

The word pampa means “plains” in Quechua language. La Pampa is a province of Argentina where Aguirre spent her childhood riding horses at her grandparents’ farm. Aguirre’s photographs and stories show a deep love and connection to the landscape.

“When you have your own business you are obsessed with it, and sometimes it gets hard to take time out or focus on other things, which is part of the reason we got Poncho,” she says, rubbing her Labrador’s belly. “Now we are equally obsessed with him!” she laughs. “We’ve found the balance.”