She describes her style as “hyper-clash salad” and he’s more ordered, but this arts writer and artist both explore the unknown in their work. 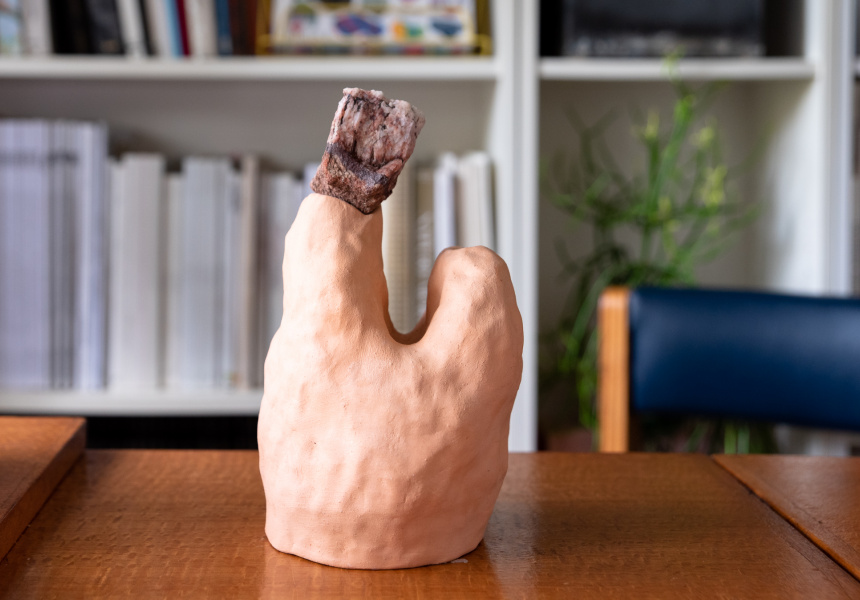 Mariam Arcilla and Mason Kimber aren’t like two peas in a pod – they’re more like a pea and a pod. That is, two parts of a whole.

In daily life Kimber is the neutral-colour wearing, orderly rock to Arcilla’s joyful chaos. “Mason is very monochromatic and minimal,” says Arcilla. “I describe my style as ‘hyper-clash salad’.”

Even their careers fit neatly together. Kimber is a Perth-born contemporary artist and educator whose practice is anchored by the “inbetweenness” of architecture and memory. Arcilla is an arts journalist who’s been published in Vault, Running Dog, Art Monthly and Broadsheet Brisbane, and a curator. She’s collaborated with the Institute of Modern Art in Brisbane, the Museum of Brisbane and the University of Technology Sydney.

They met almost three years ago when Arcilla moved to Sydney from Brisbane. “I had this big share house in Redfern and we needed a flatmate,” Kimber says. “We were doing interviews every 20 minutes – a bit like speed dating. I opened the door for Mariam and the first thing I noticed was the groove that runs from under her nose to her cupid’s bow. It’s unique and beautiful.”

It turned out another flatmate had a favourite for the room and Arcilla never stood a chance. “I always say, I lost the room but I won the boy,” she says, laughing.

After running into each other at a few art openings, Kimber invited her for a drink. Eventually they moved into the charming art-filled Darlinghurst flat (in Sydney’s inner east) where we’re now sitting around the dinner table. Green plants cascade over books and records that line the walls of their colourful lounge room. A pot of chicken adobo – a classic dish in Arcilla’s native Philippines – has been simmering on the stove for hours. Its pungent, garlic-y scent fills the room.

“Food is such a congregational thing,” she says. “It invites warmth between strangers and friends. I’ve heard and told the best stories over sardines and rice.” (Which the couple also cook when Broadsheet’s photographer visits.)

Arcilla is full of stories, particularly about her childhood growing up with her dad’s family in Quezon City, north east of Manila. Arcilla’s father is an artist, which might explain why she slots in so comfortably with Kimber. It also explains the ornate nature of her writing.

“I learned how to understand colour through my dad. He’s a painter. Nothing was ever red, blue or yellow. It was like, ‘This is fire engine red. These are azure and periwinkle. This is banana yellow.’ It’s a very visually pungent way of speaking, and it’s infused in how I write.”

Her dad’s “allergy” to punctuality has also found its way into Arcilla’s writing. “In the Philippines, movies play continuously, back-to-back. We’d always arrive late near the end of the movie and I’d have to work my way backwards. That’s how I write now – the end line first and [then I] work backwards.”

Arcilla was scared to lose the memory of her childhood home, so the couple visited the Philippines in 2018. “The house is deteriorating and my lola [grandmother] has dementia so she’s forgetting,” she says.

For Kimber, the visit was the catalyst for an exhibition. “I decided to create artwork as a way to help preserve the memories and get to know Mariam,” he says.

During the two weeks they spent in Quezon City, Kimber took silicone moulds of objects around the house and used them to create artworks that formed the 2018 show Slanted Mansions at COMA gallery in Darlinghurst.

“I took these loose rubber moulds that you knead into the surface of an object,” he says as he scrolls through images on his laptop. “Here’s a husk from a carved wood chest; here’s part of a ceramic sculpture that Mariam’s lola made.”

The moulds were used to create plaster tablets that are never complete replicas of the objects. Instead they’re fragments emerging from the dry plaster. “I love the idea of a fragment,” says Kimber. “Memory is fragmented; you only ever get a piece of something. It’s not indexical, it’s creative and we’re always adding our own thing to it. That’s what this work is about.”

The tablets were displayed in a large-scale welded steel grid built to mimic the gate to Arcilla’s family home. “The gate is the threshold to Mariam’s home, and it was also the threshold to the gallery. There were tablets in the gate and you could look through it to see more work hanging on the walls.”

The couple potter around the kitchen harmoniously. They rarely argue – in fact their first and only argument was when Kimber asked Arcilla to write about one of his shows, Future Relics.

“I kept asking Mason these hard questions, like ‘What are you trying to say? What’s the work about?’”

“And I felt a little insulted she didn’t already know what it was about,” he says. “But I realised when I make a work, it’s not a physical manifestation of what I’m trying to say, it’s more like a process of discovery.”

He also realised their work comprises two essential parts of the art story – him exploring the chaos of memory; her documenting the shows and artworks she’s experienced.

“In art, it’s the exploration and unknowingness that keeps me driving forward for an answer. And for Mariam, to write about it is to know the answer,” he says.

Asked if she would write about his work again, she says, “Depends if he asks me again.”