The design duo on DJing together and winning Oprah’s praises. 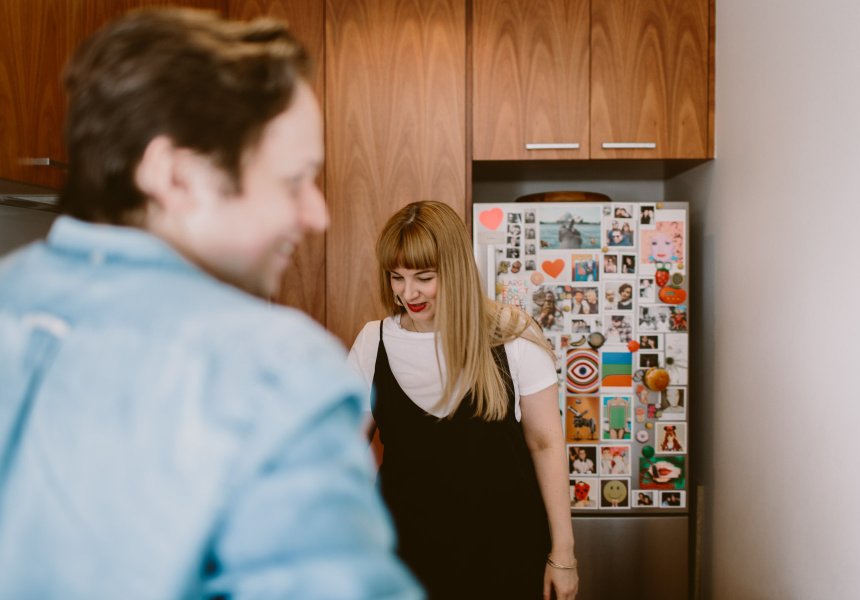 The designers met almost five years ago at a club in King’s Cross when part-time DJ Horne was on his way home from a gig.

Perry – who in the years since has gone from agency employee to exporting her cheerful pins and accessories all over the world, with her eponymous label Georgia Perry – laments that their late-night love story probably wouldn’t transpire in 2017.

“It's really sad, it would never have happened,” she says.

But Sydney has been firmly in the rear-view mirror for the pair since 2014, when Perry and Horne (a graphic designer as well as a DJ) spontaneously took a lease on a sprawling three-storey apartment in Fitzroy, Melbourne.

They’ve clearly fallen in love with the place, and sitting among towering indoor plants (whose health Perry credits to Mr Kitly’s cult self-watering pots) on their immaculately curated top-floor, it’s easy to see why.

“It’s like a compound,” Perry says of the space that accommodates Horne’s office and music equipment on the top floor; the couple’s bedroom and Perry’s office on the second; and Perry’s product line in the garage/warehouse space on the ground level.

Perry says she assumed she’d “hate” dating someone in the same industry, but it’s been just the opposite.

“You just get each other. I can show him earring designs, and he’s not going to wear them, but I trust what he says.”

Asked if working and living together is a recipe for cabin fever, the pair says no – but “weekends are important”.

“I used to be way more psycho about work,” says Perry, who has grown her label from something begun on a whim to earn some “extra Christmas money” to winning 150 local and international stockists across Europe, Asia and the US, including cult Parisian concept store Colette, iconic French department store Le Bon Marche and Nordstrom in the US. She can also list collaborations with global brands such as Clinique and Shop Bop.

Spontaneous though the launch might have been, her decision to focus on pins was strategic.

“[Pins] weren’t really the movement they are now, but I wanted to make something that was easy to ship and represented the things I’m into,” Perry says.

For the self-confessed reality-TV fan, that meant a debut collection dripping in pop culture and featuring the distinctive faces of Karl Lagerfeld, Drake and Oprah. The talk-show queen, Perry says, was apparently delighted to meet someone wearing her face on their collar the last time she was in Australia.

(Giant fashion chains Zara and Forever 21 may have liked the designs too; they’ve been accused of ripping her and others off, resulting in a high profile protest and an ongoing class action that Perry says she can’t discuss.)

Perry credits the success of her label, which is now expanding into socks, bags and other accessories, to her willingness to quit a stable day job and go out on her own. She partly credits that to Horne.

“It’s very much a yin and yang situation,” Perry says, turning to Horne. “It wouldn’t have been so easy to resign and start my own business if you weren’t so chill.”

Horne is a self-described “full-time slashie”, dividing his time between design gigs for the hospitality world (including Joey Smalls in Melbourne and Tio’s in Sydney) friends’ record labels in Europe, Adidas, the Art Gallery of NSW and playing gigs around Melbourne at Workshop Bar and Longrain. He's also about to release a t-shirt label called Baby Face.

“I’ve been teaching her and she nailed it on her first mix,” he says.

Perry claims it was a fluke, but the pair made their musical debut at Workshop Bar in March. They think they may have found a niche.

“How many DJ couples do you know?” Perry asks.