This industrial design duo are partners in work and life. We dropped in to their sunlight-flooded home on a chilly winter morning to talk inspiration, process and the art of cosiness. 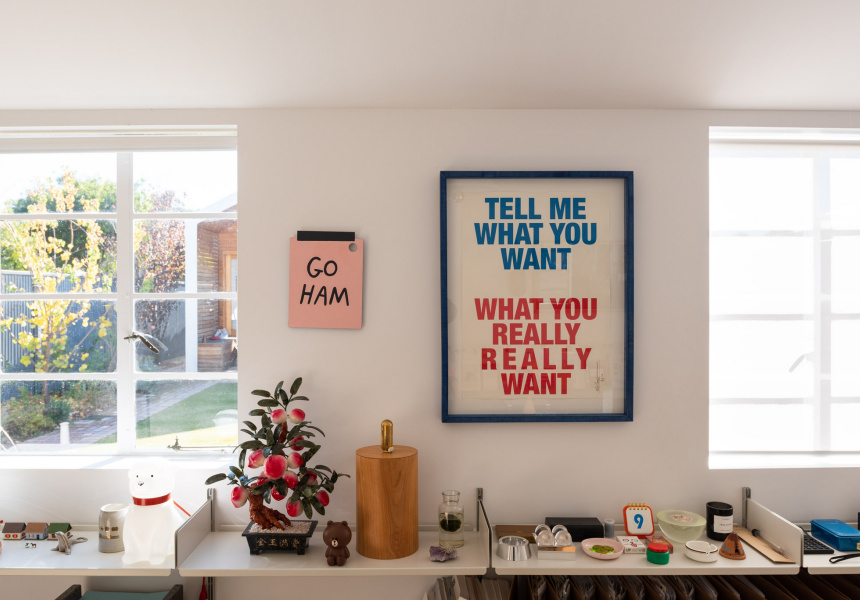 When Scandinavian fashion giant Cos engaged Adelaide-based industrial designers Daniel To and Emma Aiston to curate a series of window installations for the opening of their first Australian stores, chairs became the couple’s calling card.

It’s curious then that they only recently replaced the rickety hard-rubbish dining chairs they had been using themselves at home for almost a decade.

When Broadsheet visits their sunlight-flooded Rosewater home on a chilly winter morning, his and hers Birkenstocks sit flush on the veranda (both get around in their socks). Inside, countless knick-knacks – though not adhering to any one style – mesh perfectly.

To and Aiston met 16 years ago studying industrial design at UniSA. But it became clear Adelaide had little creative practical experience to offer; most was with hardware companies such as Stratco or Hills Hoist, says Aiston – “Very specific and, you could argue, not at all creative.”

The creative itch took them to London in 2007 where they both worked in a handful of design studios. They set themselves a goal to achieve before their visas ran out: exhibit at London Design Week. They did. And the “bees knees” of design magazines at the time, Wallpaper, christened them “graduates to watch”.

Riding that high back to Adelaide, they established their own design studio, Daniel Emma, in 2008. They started with small desk objects (such as paperweights, cork cones and stationary containers). It was a crafty decision. “One of the biggest constraints of going [back to exhibit in] London was we were real tight-arses and didn’t want to pay for freight,” says Aiston.

Then the pigeonholing began. “People thought we could only design small things,” says To. They disproved that in 2013 with their exhibition Big! at Melbourne gallery Lamington Drive.

Back to those signature chairs. The upholstered, steel-framed furniture is made locally in Thebarton. “Turns out more people want chairs than paperweights,” says Aiston. “Our biggest ever order was for 150, we filled it on Christmas Eve three years ago, packing a container in 42-degree heat.”

On the topic of inspiration, we learn these two – working (very successfully) in one of the most trend-driven industries – are largely blinkered to it all. “We don’t go on design blogs, we don’t buy design magazines, we rarely go to exhibitions,” Aiston says. “That way you can’t accidentally replicate something,” adds To. “If all you do is look at other people’s designs you’ll end up [replicating] because it’s already somewhere in your brain.”

Parallels have been drawn between Daniel Emma’s style and the ’80s postmodernist Memphis Movement. “If you were to [compare] I think you could definitely see some similarities,” says Aiston. “But we’re getting ideas from authentic experiences – we spend a lot of time in Asia – rather than going back in time and picking out some really funky stuff to reference.”

Both use the word “selfish” to describe the way they design. “In the beginning we were just designing for ourselves. It was just a really lovely bonus other people liked those things, too. I actually don’t know that’s changed much,” says Aiston.

Commissions and brand collaborations also make up a chunk of their workload (and residual income). They’ve designed watches for Melbourne’s Aark, lights for French homewares retailer Petite Friture and bookends for US brand Field.

But you’ll find none of it on display in their home – apart from a mirrored coffee table that “doesn’t quite fit in the studio”, says Aiston. “It feels a bit perverted, we think of it like a musician listening to their own songs all the time.”

They’ve lived here, with their 15-year-old sausage dog Frankie, for almost 11 years. It’s just around the corner from fellow creatives Peter Drew and Julie White, who we visited for this series last year.

Open-plan living isn’t To and Aiston’s thing. Cosiness sits on the same mantle as creativity (there’s tea brewing when we arrive). “We have a lot of little seating areas for two people,” Aiston admits, chuckling. Perhaps the best spot in the house is the living room – a timber-heavy, pitched-roof extension with triangular windows designed by architect friend Haslett Grounds. And a huge TV.

“Our non-work life is probably quite different to what people think,” Aiston says. Sure, they work hard. But they also “really fucking like watching TV” – AFL and Korean dramas to be precise.

Frankie plods beside us as we move outside, nuzzling at my ankles; “Stop sniffing, problem child,” Aiston quips. Behind a big yellow door in the backyard is the best-looking shed I’ve seen – the studio. This is where the Daniel Emma magic happens. “We’d always been reluctant about having our studio space at home,” says Aiston. But who couldn’t be productive here?

Their design processes differ: To sketches, Aiston doesn’t. (“Not one fucking time have I sat down and sketched and something good’s happened; it’d normally be a large argument and then we’d go out for burgers,” she says.) They talk – a lot. But self-enforced brainstorming is rarely the answer.

They work best with a prototype they can interrogate. “Rather than having 5000 sketches of a chair we’re much better off just having a chair,” says Aiston. Every single piece is a collaborative effort. And, importantly, each takes criticism from the other like a champ. “We’re never in the foetal position about it,” says Aiston. “There’s no need,” To adds, with a smirk, “You get enough rejection externally.”

The pair’s studio used to be in Adelaide’s multidisciplinary arts hub, Jam Factory, where this year they were appointed creative directors (they oversaw the retail and product arm since 2014). The newly created position covers Jam Factory's ceramics, glass, furniture, and jewellery and metal studios. 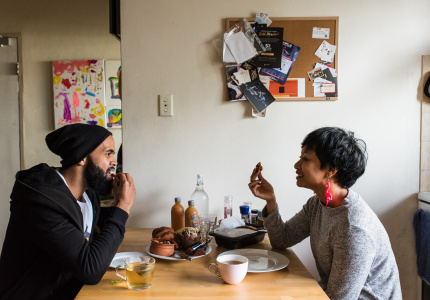