Transport, accommodation, dinner, exhibition tickets, entertainment from top-tier DJs and drag performers – and you don’t have to pay for it. In partnership with NGV, we’ve got the perfect weekend away for you. Update: March 19, 2020: This competition will no longer be going ahead due to the temporary closure of the NGV and coronavirus.

If you still haven’t caught the NGV’s current blockbuster exhibition, Keith Haring | Jean-Michel Basquiat: Crossing Lines, we’re giving you a chance to not only see it but make a colourful weekend of it.

It starts on a Friday night. One winner and a friend will receive access to the exhibition on April 3, which explores the unique visual language of groundbreaking New York City artists Keith Haring and Jean-Michel Basquiat in tandem. Despite the fact that both artists died at a young age, they were – and continue to be – major influences on popular culture, from the ’80s through to the present. Exclusive to Melbourne, this world-premiere exhibition features more than 200 artworks across many different mediums.

On that night, you’ll also get to attend the late-night NGV Friday Nights series. Inspired by the exhibition, this season of Friday Nights pays homage to downtown New York in the ’80s, complete with drag performances, classic cocktails and NYC-style street food. You’ll get a pair of drink vouchers too.

Events on the night include: DJ Manchild (who you may have seen at Golden Plains or Boogie) spinning some ‘80s disco; performances by Motherless Haus and Simonetti; romance-steeped solo artist Tanzer (performing in the Closet Disco Bar); reflections on Haring and Basquiat’s final works from curator Pip Wallis and some soul and funk by DJ Nicole Misha.

And before all those festivities, you and a friend will enjoy dinner for two at Lesa, and later stay the night in a classic king room at Sofitel Melbourne on Collins. You’ll also receive complimentary transport between Lesa and the NGV courtesy of Mercedes-Benz.

Update: March 19, 2020: This competition will no longer be going ahead due to the temporary closure of the NGV and coronavirus. 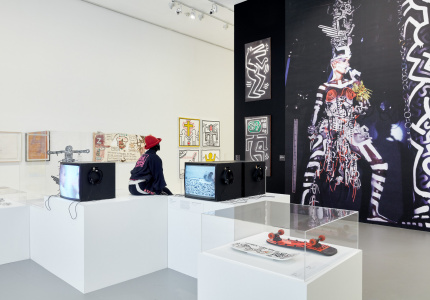