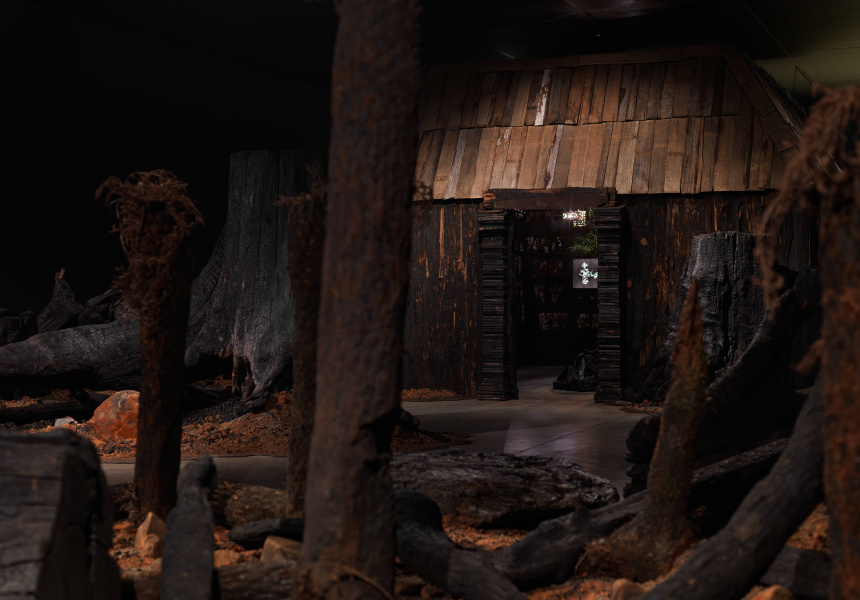 Descending the stairs into Mona’s lowest level, the area known as the Void, it’s hard to miss the vast sandstone wall – layers and layers of rock showing millions of years of history into which Mona was cut.

It’s the morning of the launch of three new exhibitions at the Hobart gallery. Mona curator Emma Pike reads an Acknowledgment of Country that addresses the fact that during the building’s construction, Aboriginal heritage sites were either moved, buried or destroyed. The realisation perhaps comes too late (the right time would be before breaking ground), but some recurring themes among these new exhibitions is that action and understanding sometimes come out of order; that which is destroyed can be recovered; and it’s never too late to make amends.

Although curatorial director Jarrod Rawlins points out the three installations are completely unrelated – they were developed separately and, at the time of the opening, the artists hadn’t even seen each other’s work – patterns emerge in the gaps between. Two are by Indigenous artists working with burnt remnants from local trees. All three are about transcending time’s destructive effects. And all three subvert the museum space in which they’re housed.

In a dark room
In Brisbane-based Robert Andrew’s Within An Utterance, a dark room is scored by a mechanical whir. On the wall, charcoal and rocks hang from string, drifting slowly across white canvasses, leaving seemingly random scrawls. But follow the string across the darkened ceiling, the network of thread is interconnected, leading back to a central machine. The machine is slowly making the letterforms of words from palawa kani, lutruwita/Tasmania’s reconstructed Aboriginal language.

The process sounds complicated, but it’s gracefully simple in practice – it’s a translation machine. Until about 150 years ago, lutruwita/Tasmania had dozens of active languages. A century of colonial rule ended that. For the past 30 years, the Tasmanian Aboriginal Centre has been creating palawa kani from the remnants. Now, Andrew’s machine converts the reconstructed language palawa kani into images, drawn with remnants of the charred landscape. It’s as if Country is speaking in an endlessly regenerative process, reaching across centuries of loss.

“The results are random in a sense,” says Andrew. “But over time the patterns repeat, become more distinct. Textures emerge, and it all keeps developing. It’s like what’s happening here with palawa kani, with the process to revive it, to locate it.”

Andrew is a descendant of the Yawuru people from the Broome area in the Kimberley, and being an outsider working in lutruwita/Tasmania with local materials is a sensitive process. The physical materials – the charcoal, ochres, the soil – have been sourced from cultural burnings on Melukerdee Country, south-east Tasmania, with the cooperation of local Indigenous groups.

But Andrew uses the word “gifted” to describe not just the physical materials, but the use of the language. If local Pakana knowledge-holders didn’t want to work with Andrew on the project, using palawa kani would be a non-starter.

“The majority of my work is about using language,” says Andrew. “Coming down here, initiating those conversations, is what makes the work.”

A completely different proposition
Around the corner, Berlin-based Canadian artist Jeremy Shaw’s work is a completely different proposition. Phase Shifting Index is a seven-channel video work in the form of seven documentaries about weird dance cults. On one screen, an odd combination of witchcraft and ’80s aerobics plays out. On another, a band of ’70s-esque hippies writhe around with a rope and on another, ’90s straight-edge teenagers thrash out to metal. All seven screens play at once, right next to each other on large projections, so it’s hard to follow the details, but there’s a complex plot woven in here about dance subcultures in the future breaking down the walls around reality through the power of human movement.

“They’re very alchemical in their composition,” Shaw says. “They reference certain timeframes, styles of dance, somatic practices. It’s all smashed together. Dance is part of all facets of transcendental behaviour. Whether you’re on drugs, or you’re religious, it always comes back to dance.”

The films are all narrated by a po-faced documentarian voice. “I grew up in Canada watching a lot of BBC,” says Shaw. “So this voice is always to me this voice of authority.”

This didactic voice is also completely at home in the top-down, educational space of a museum. But the protagonists of the work subvert that. As the films begin to interact with one another (in ways that I won’t spoil), the subjects of these films break their bonds and transcend their places as museum pieces. And we, the audience, walk between the screens. It’s like time travel.

Scent hits you first: wood and charcoal
The final work – the most moving – is found through a curtain at the back of this show. Scent hits you first: wood and charcoal. Amid a winding path of burnt-out tree husks, there’s a run-down timber hut adorned with a century of ephemera. Charred books on mythology line the door, the inner walls are plastered with images of global destruction and conflict, and light shines through a stained-glass window made from plastic bottles. At the centre of it, a rickety coffin glows from within and, most startlingly, a peppermint tree grows defiantly from the floor.

This is Exodust: Crying Country by AJ King and Fiona Hall. Exodust and Andrew’s Within An Utterance speak to each other in many ways, but these burnt trees aren’t from cultural burnings, they’re from logging sites in Melukerdee Country in Tasmania’s south.

“I had my family down there with me for many days,” says King. “We were standing on stumps and trees, 450 to 500 years old. I still get this sense of loss when I walk in that room now. It was about getting that re-creation accurate, so people can connect to it.”

King and his family collected fresh charcoal and clay that had burned so hot it had “fired practically into bricks”.

“This degradation happened over a very short period of time,” says King. “This forest was probably more majestic than the Tarkine [Australia’s largest temperate rainforest, in Tasmania]. One day these ancient trees will be gone completely and people will forget what was once there.”

And the peppermint tree? “The only living thing in the work,” says King. “It’s hope.”

Many of Fiona Hall’s sculptural works are built into the structure and in glass cases behind it. Silver branches and penises emerge from open fish cans. Atlases are left open to conflict sites around the world, on which world landmarks carved from bread crumble. It’s a simultaneously local and global cry for change.

The Dark Mofo controversy
Our conversation is dominated by both Hall and King talking openly about getting involved with Mona and Dark Mofo again after the 2021 festival’s cancelled, controversial Santiago Sierra artwork. The Spanish artist requested First Nations peoples from countries and territories colonised by the British Empire donate their blood to him. At the time, Kimberley Moulton, Yorta Yorta woman and senior curator for Museums Victoria, captured the backlash perfectly: “This is an insulting and abhorrent curatorial decision @dark_mofo there has been ENOUGH First Peoples blood spilt across the world because of the English.”

Dark Mofo and Mona are two separate entities – though Mona’s David Walsh had approved the project that so angered the Indigenous community and beyond. Both Walsh and Dark Mofo director Leigh Carmichael apologised, but the hurt in the community is still strong.

So why is King now here at Mona, and working with Dark Mofo?

“You’ve got two options,” he says. “Either we boycott and nothing happens, or we work with people to facilitate change. You sit down with eye-to-eye contact and say what was wrong, what shouldn’t have happened, and what can happen now.”

“We had about 5000 people walking with us, together,” says King, who co-curated the event with Luana Towney. “It’s indicative of people that are learning, listening and changing. It won’t be fixed overnight. We’re always watching. But if we don’t make the most of it, then nothing happens. We’ll get there. All we need is change-makers and leaders.”

There’s a long way to go – Mona has no Indigenous curators, nor an Indigenous art policy. Dark Mofo’s promised First Nations advisory group and $60,000 in seed funding to commission new works from Indigenous artists (announced last May, post-controversy) is yet to materialise.

Leaving Mona’s basement level, past the layered sediment wall, past Egyptian amulets and Costa Rican pendants, and imported human remains preserved in a sarcophagus, I wonder if the whole project of a museum, an inherently colonial concept, needs a rethink. What is a museum if not a way of cataloguing the past to better order the present? The three shows at Mona right now present a different way – conjuring the forgotten past to imagine a future with healing, transcendence and unknowable possibilities.

Within an Utterance by Robert Andrew, Phase Shifting Index by Jeremy Shaw and Exodust: Crying Country by Fiona Hall and AJ King are showing at Mona until October 17, 2022. Dark Mofo is on in nipaluna/Hobart until June 22.

Broadsheet reached out to Dark Mofo to get an update on the First Nations Advisory Board and seed funding. We received no response at time of publishing.