The Artist Behind the Australian Open’s Striking, Celebratory Artwork

Aboriginal artist Maggie-Jean Douglas has produced a striking work for the tennis this summer. In partnership with Australian Open, we speak to her about community, her inspiration and process, and collaborating with Wurundjeri Elder Aunty Joy Murphy AO. 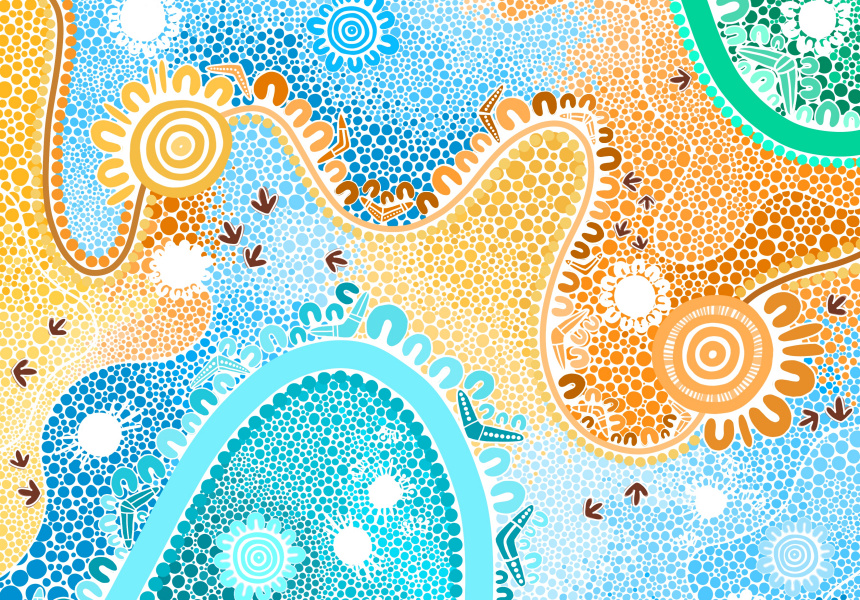 Anyone attending the Australian Open this year will see it – the bright, colourful artwork of Maggie-Jean Douglas, a Gubbi Gubbi woman who grew up on Goreng Goreng Country. The work, inspired by the Australian Open’s 2022 theme, United by Play, will feature on murals around the Melbourne Park precinct, as well as a range of colourful merchandise – a collection of organic cotton T-shirts, hats, face masks and five limited edition surfboards– with profits going to support tennis opportunities for Aboriginal and Torres Strait Islander children.

Douglas says the idea behind it all is to reflect the opportunity the event presents for healing and unity in the wake of a difficult couple of years due to the pandemic.

“I think it’ll be a special event, just because of the hard year everyone’s had – especially in Melbourne,” says Douglas. “I really want people to be able to gauge that sense of community from the artwork and find [in] it something special that represents how they’re feeling, being able to come back and be together again.”

Collaboration and process
Before getting the call to participate in the Australian Open event, Douglas was already working on a tennis-themed brief. “I had just done a collaboration with the artist Paink on an Evonne Goolagong mural up on the Sunshine Coast,” says Douglas. Paink had previously worked with Tennis Australia, and the connection led to an offer to contribute to the Australian Open.

To help guide her contribution, Douglas worked with Wurundjeri Elder Aunty Joy Murphy AO. “The team I’d been working with were already in contact with Aunty Joy about the Australian Open, making sure they were doing things respectfully,” says Douglas. “They asked if I would like to communicate with her on some guidance. I did want to – I think that’s the respectful thing to do because it is her land.”

Aunty Joy’s influence is directly present in some of the imagery Douglas created. “She suggested boomerangs in there,” says Douglas. “So that’s where they come in. They’re going in a direction as if they were spinning, [which] brings in the returning element [of the theme].”

The collaboration was so successful, the pair have just completed a second piece for the AO. “That one is more about the environment on Country in summertime,” says Douglas. “There’s eagles and kangaroos, and she wanted the Southern Cross in the sky, because that’s something you can see clearly in summer.”

Marking a meeting place
Collaboration isn’t just a helpful means of production for Douglas – it’s a central theme of her work. She describes her style as contemporary Aboriginal art, combining bright colours with traditional symbols and imagery. With shades of blue a common choice for her work – as well as being so identifiable with the AO’s signature blue courts – Douglas’ art is filled with representations of togetherness.

“When they [briefed me] about the sense of togetherness and community, that’s really something I include a lot of in my artworks in general,” says Douglas. “In the art [you can see] circle points – they have people around them. So there’s people sitting there; that’s a representation of people being together. There’s another symbol in there, the circle, and there’s some lines coming out opposite sides of it – that represents a meeting place. Which obviously is the Australian Open.”

This article is presented by Broadsheet in partnership with the Australian Open. 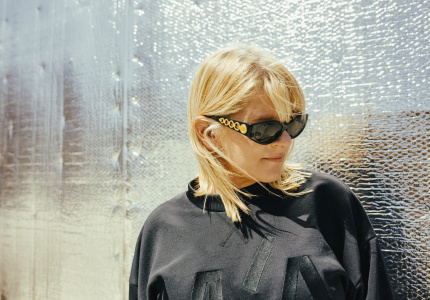