The Work-Life Balance of a Small-Business Duo

Josephmark directors Ben Johnston and Jess Huddart lead a double life: globetrotting business owners during the week, organic farmers on the weekend. In partnership with MINI, we learn how they achieve balance while running their own businesses. 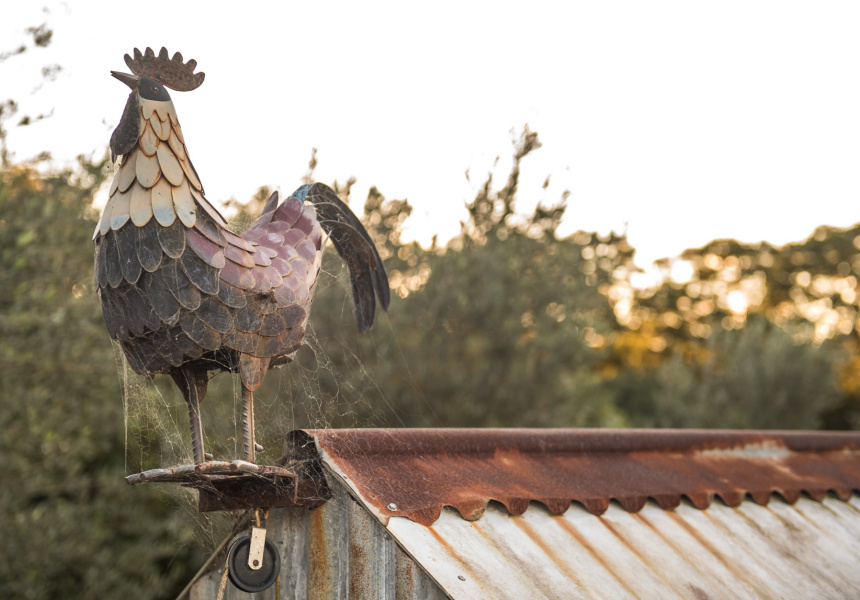 Ben Johnston and Jess Huddart are the husband-and-wife team behind Josephmark, a digital design agency. With offices in Brisbane, LA and Stockholm – and a 20-month-old daughter, Florence – the talented pair have “very full lives”, says Johnston.

In 2013, they decided it was time to get out of the city – for at least part of the week. “We wanted to put down some roots and ground ourselves,” Johnston says. They found a 50-acre block, overgrown with lantana, near the village of Mapleton in the Sunshine Coast hinterland, coincidentally just 10 minutes from where Johnston grew up. “I never anticipated moving back there, but it’s a beautiful part of the world,” he says.

Originally a weekend getaway, the block soon became a thriving organic farm with the help of both Johnston and Huddart’s parents, who helped plant vegetable gardens and orchards and now run the operation.

Falls Farm sells seasonal produce at the farmgate and farmers markets, and supplies restaurants in Brisbane and the Sunshine Coast with fresh fruit, vegetables and edible flowers. “We have about 80 items on our produce list,” says Johnston. “We’ve built a reputation for having really good produce – a lot of effort goes into soil health. We have really close relationships with a lot of the chefs that we work with – they’ll come and visit the farm each season.”

What began as a way to escape the city has now turned into a lifestyle. Huddart and Johnston took time out from their busy schedules to share their tips for achieving work-life balance with Broadsheet (and no, they don’t all require you to own a country property).

During the week, Johnston and Huddart live in an apartment in Fortitude Valley in inner Brisbane, an area known for its urban grit and bustling nightlife.

It’s an environment that couldn’t be more different from life on the farm, which is characterised by a combination of calm and manual labour. “Being out in the garden planting trees or landscaping or doing the mowing – that’s actually relaxing,” says Johnston. “It’s a vast contrast to our other life, which is a lot of boardrooms and airports and computer screens – a lot of intellectual heavy lifting.”

But spending time at the farm isn’t merely an escape from an unbearable work schedule. “We love what we do at work – we get to be creative and work on things we care about,” he says. “It’s just shifting gears and lowering that heavy cognitive load, swapping it out with more rejuvenating activities.” An occasional change of environment is the ideal way to clear your head.

The farm doesn’t just provide an opportunity to swap computers and keyboards for soil and spades – it’s a valuable source of inspiration for both Huddart and Johnston, who says some of his best thinking happens away from the office. “You feel the effects of nature and what it does to your creativity,” he says.

For a pair of digital designers, regenerating the land and establishing a working farm has been a rewarding project, but it doesn’t just function as an escape. “It’s been a lot of fun designing the place and seeing the tangible outcomes,” Johnston says. “It’s been very satisfying for the soul.”

They considered knocking down the “rickety” homestead but instead embarked on a DIY renovation of the 100-year-old building. “It’s been a creative outlet,” says Huddart. “It’s allowed us to form ideas about the things we do in other areas of our lives.”

The importance of ritual

A cleansing dip in the ocean helps Huddart and Johnston change gears as they shift between their country and city lives. “I love surfing, and Jess loves the beach,” says Johnston. Getting “salty”, he says, “is a ritual that helps set up the week.”

On a Sunday afternoon, the family often heads to Moffat Beach at Caloundra for fish’n’chips and a swim. “It’s such a beautiful spot,” he says. It’s also a chance for to catch up with friends who live on the coast. “It ticks a lot of boxes,” says Huddart. Make sure to keep a picnic blanket in the car for moments like this – it pays to be prepared.

Part of the appeal of having a farm over an hour’s drive from Brisbane is the journey there. Nestled in the Sunshine Coast hinterland, the farm is surrounded by winding roads that are popular among Sunday drivers.

While Johnston has a van that fits both his surfboards and a bed in the back for forays to the coast, Jess’s pride and joy is a 2009 MINI John Cooper Works Hatch special edition in British Racing Green – ideal for making the most of the scenic roadways that surround the farm. “A lot of car clubs do the circuit on the weekend,” says Johnston. “You get to escape off the freeway and enjoy the cars for what they were built for.”

Huddart and Johnston’s peripatetic lifestyle means they’re experts at packing a suitcase, but there are some things they make sure they’re never without.

“There’s always towels and bathers in a basket in the back of the car – and now a bucket and spade and hats and sunscreen,” says Huddart. “We have city clothes in the city and farm clothes at the farm – we are fortunate that we have these two spaces that are so well set up.”

This article is produced in partnership with MINI and is inspired by the MINI Countryman, which boasts a loading shelf, fastening straps, extra LED lights and a dual USB port (perfect for powering a cooler) and a luggage compartment of 450 litres. To get started with MyBroadsheet, click the login button in the top-right corner of the page.