Produced by Broadsheet in partnership with Petstock.

A Recipe, DIY Spa and Mind Games: Three Ways to Pamper Your Pet

A belly rub is great, but have you ever given your dog an actual massage? In partnership with Petstock, we ask an expert about three simple ways we can pamper our pets at home. You could set up a DIY day spa, whip up a batch of homemade treats (we’ve even included a recipe), or play a game of hide-and-seek. 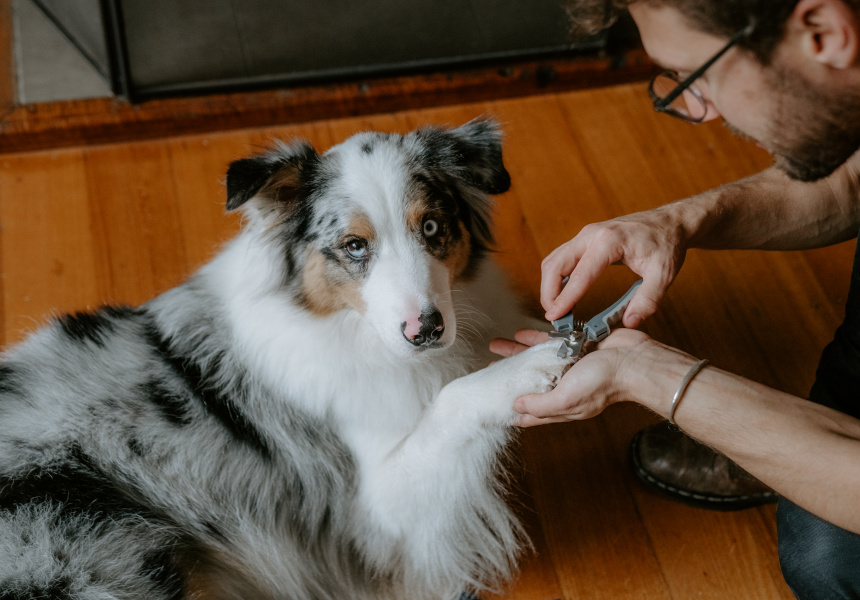 We’re all spending a lot more time at home right now, and it’s not gone unnoticed by our pets. While dogs are likely loving the extra pats and company, there’s still scope to think creatively about ways to bond with our best buds and show them we care.

Like us, they could use a little TLC, some home-baked bickies, and a couple of brain games to keep from going stir crazy. There are no jigsaw puzzles for dogs yet, but a treat-based treasure hunt or a game of hide-and-seek might do the trick.

“A tired dog is a good dog,” says dog behaviourist Lara Shannon, whose new book Eat, Play, Love (Your Dog) is out in June. “The more you can do with them to work their brains and bodies, the better behaved they’re going to be,” she says.

Shannon has three ideas for pampering pets through this tricky time.

DIY day spa
“A bit of home pampering or a nice gentle brush is a good place to start,” says Shannon.

She recommends brushing dogs at least once a week and has a rule of thumb for knowing how often to reach for the grooming kit. “For every centimetre of hair they have, you would brush it that many times per week,” she says. “Most dogs would be once a week, but if they have two centimetres of hair, you would brush them twice a week. Three centimetres of hair, three times a week, and so on.”

Start by brushing from head to toe. “It gets the body feeling good, gets the blood stimulated and [the dog’s coat] looking nice and shiny as well,” Shannon says. You could even add some calming, lavender-scented conditioning spray into the mix.

If your dog is comfortable with running water, you could even give them a bath – but don’t force it if not.

“If your dog does have a few issues with having a bath, maybe go back to basics and try to create a positive association for them. Get some help, use some treats while you slowly introduce them to water again. And just go step-by-step. That’s a tip for general washing, too,” she says.

Showers with detachable heads are handy. Laundry sinks are safe and deep. But if your dog is especially nervous, a jug of gently poured warm water works.

It’s also important to regularly trim dogs’ nails. “You don’t want your dog’s toenails to get too long because it can end up hurting them,” says Shannon. “Use proper dog-nail clippers and hold them on a 45-degree angle. And really slowly, bit by bit, trim off the end and avoiding clipping the red nerve, which you can see quite easily in white nails.”

If you hold your dog’s nail up against your iPhone torch, for example, you'll be able to see where the nerve finishes, even in dark nails. Check ears – particularly long, flopping ones – and wipe them out with a warm cloth. Ambitious amateur groomers with clippers can also snip back the hair around their dog’s paws, bottom and eyes.

Finish off – or even start with, if your dog’s nervous – a gentle massage to relax them. “I give my dog a daily ear massage,” says Shannon. “A dog’s ears release feel-good endorphins because of all their nerve endings. [It’s] a bit like acupuncture.”

Brain games
“A great way to pamper your pet is to play some brain games to keep them mentally and physically stimulated,” Shannon says. One of her favourites is the treat-based treasure hunt, which is exactly what it sounds like.

“Start slowly,” she says. “If your dog hasn’t played it before you might put them on a lead or have someone hold them and actually show them where you're putting the treats and then you let them go find them. They soon work it out.”

Over time, you can hide treats further away or in more challenging spots. Once dogs are reliably finding them, you could even add a cue word or phrase such as “find your treat”.

Shannon suggests hiding treats in one room while your dog’s in another, or even upping the ante by hiding them under cups, a rug, or out in the backyard. It’s also a handy game to have in your pocket when you do go back to work. On that note, it’s important to make sure your dog still gets some alone time while you’re working from home, so they don’t get anxious when you leave.

Sending them on a treasure hunt as you head out can provide a distraction, as well as creating a positive association. Dry food can be subbed in for treats as well.

“Doing things like treat treasure hunts actually gets them working for their food like they would in the wild,” says Shannon. “Unfortunately, most of our dogs spend their days languishing away at home, whereas once they’d spend the whole day foraging for food.”

Playing hide-and-seek is a quick way to engage your dog when you get home, or even out on a walk. “My mum plays it with her dog all the time,” says Shannon. “She’ll run and hide behind a tree and then call his name and he’ll come running. He loves it.” At home, you could try hiding in a cupboard or behind the couch.

“The key if you are pampering your dog is to give them a really positive experience,” Shannon says. “If they’re nervous, be careful not to reinforce that nervousness… When they’re shaking or barking or biting we often try to placate them, but that’s the opposite of what we should be doing.”

Ignore unwanted behaviour, and as soon as they calm down, “that’s when we really make a fuss of them,” she says.

Failing those options, you could always try a long-lasting occupier treat, or a treat-dispensing toy.

Baking at home
As the endless homemade sourdough starters popping up on social media can attest, many are using the present moment to unleash their inner bakers. Why not try baking some dog treats?

“There are lot of really healthy recipes,” says Shannon, who says it’s worth familiarising yourself with a list of ingredients dogs can and can’t eat. “The one I like to make used freshly diced chicken pieces, rice flour, a little bit of parsley and an egg.”

Find the recipe below (and if you’re not so good in the kitchen, never fear: you can buy dog treats online too.

Method:
Preheat oven to 180 degrees. Mix together all ingredients and stir well. Spoon mixture into an ovenproof silicone mould to create bite-sized shapes.

Bake for 20 to 30 minutes until tops are golden brown. Allow to cool then remove from moulds. Store in fridge or freezer in batches.

This article is produced by Broadsheet in partnership with Petstock.

Produced by Broadsheet in partnership with Petstock. Learn more about partner content on Broadsheet.