Coming Soon: Urbnsurf’s Opening Is the Most Anticipated Australian Surf Event of the Year

The arms race to open the country’s first legitimate, surfable wave park is about to be won. Here’s how it works. 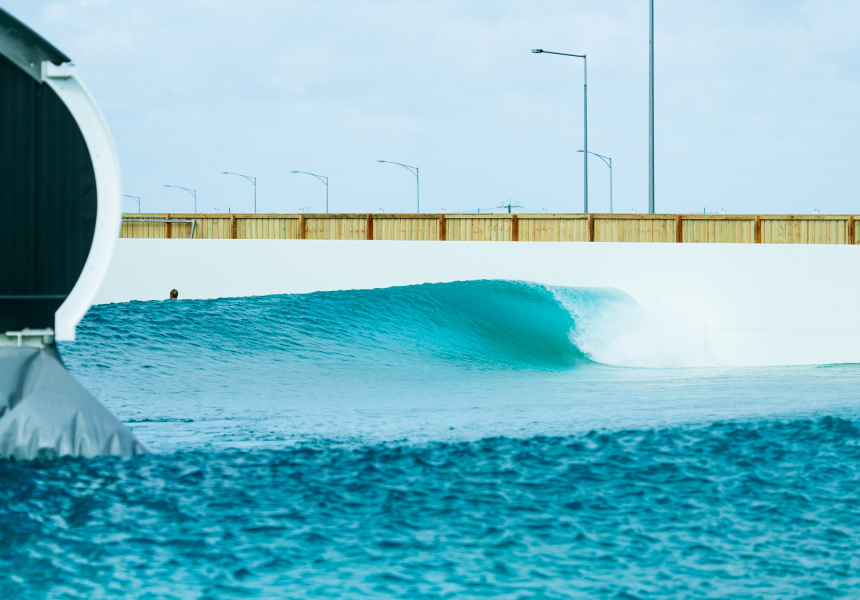 If you’re like most Australian surfers, you’ve been following the development of wave parks with interest, but not much investment. Dozens of projects in various stages of completion are scattered across the globe, with designs ranging from the seriously impressive to the laughable. Very few are actually operational, and even fewer boast man-made waves you’d actually be excited to surf. And then there’s the simple reality of the situation: getting to them requires flying past thousands of real waves, breaking on actual beaches you can visit for free. But when Urbnsurf launches this summer in Tullamarine (right by Melbourne Airport), it will be not just Australia’s, but the southern hemisphere’s, first surfable wave park. And it comes loaded with expectation.

In 2015, when Kelly Slater dropped a bomb on the surf world with video footage of himself riding perfect waves in a pool he helped design, the excitement was real, but still kind of academic. Surfers knew Slater’s pool was a game changer, but also knew it wasn’t something they’d get to ride anytime soon, if ever.

There was a similar reaction to Australia’s first surfable man-made wave, Surf Lakes, when it was unveiled last year at a testing facility 650 kilometres north of Brisbane. Who’s going to travel past some of the world’s best point breaks to have a splash in a novelty pool? Get back to me when one opens up the road.

But … what if a wave park really was opening up the road?

It’s October 16, and Broadsheet’s speaking to the founder of Urbnsurf, Andrew Ross, as he watches recently-hired lifeguards chase crash-test dummies around the gigantic pool he’s created in Tullamarine. It’s the first day of testing, one day before Ross – along with a small crew of friends and investors – will ride his waves for the very first time. If you don’t surf, it’s kinda hard to overstate the gravity of what’s about to happen. For decades, perfectly breaking man-made waves have been one of surfing’s white whales, a dream that’s had many millions thrown at it, leaving a trail of beaten-down investors and abandoned real estate. Even with the huge advances in engineering and design of the past decade, there are still no surfable wave parks open to the public anywhere in the southern hemisphere (the Surf Lakes facility in Queensland is for testing only).

Taj Burrow, recently retired world tour stalwart and one of Australia’s most popular surfers ever, has flown to Melbourne for the big day. As Ross chats to us, one of the country’s most respected big-wave riders, Mark Mathews, calls in.

It’s taken seven years of dreaming, planning and work, but Ross’s dream – of bringing “perfect” waves to Australia’s city-bound surfers – is a reality.

So ... what is it? How does it work?
Think of Urbnsurf as a water park with a singular attraction: a “lagoon” Ross describes as a baseball diamond split in two. The lagoon holds 25 million litres of water (equivalent to around 16 Olympic swimming pools), and is situated in a two-hectare site that’s also home to a new restaurant from the Three Blue Ducks team. In the middle of the lagoon is a pier with an electromechanical device that uses huge pistons to push water out to both sides. That water is lifted across finely calibrated contours on the lagoon floor to create surfable waves – as many as 1000 per hour – to suit all surfing abilities.

Tell me more about the waves. How big will they be?
As hype gathered around Urbnsurf, speculation about wave size has been the biggest and most persistent question from Australia’s surfing community.

Urbnsurf uses a design created by Wavegarden, a company that first sent the surf media into a spin in 2011. Four years before Slater unveiled his design, Wavegarden showed us a wave every bit as perfect. The only issue: it was thigh-to-waist high, at best.

A lot has changed in the years since. Wavegarden now has two surfable parks in the UK, including one in Bristol that’s just ahead of Urbnsurf in terms of completion. Video from Bristol released last week shows waves that are also quite small, but while Melbourne uses the same inherent technology (Wavegarden’s newest design, dubbed “The Cove”), it’s a very different set-up.

Urbnsurf will have three distinct surfing zones. One for beginners with knee-high whitewater, then a section slightly further into the lagoon with waist-high, unbroken waves for intermediate surfers. The far end of the park will be for the experienced. And those waves?

“We think we can get it up to 2.1 metres, top to bottom,” says Ross. “In other words, over head height. Around a solid 3 feet, in surfing terms.” Put in non-surfing terms, this is fun-sized surf, well within the happy medium between too-small-for-a-thrill and concerningly big.

As you can imagine, moving enough water to create head-high waves means using a great deal of power. For this reason, Ross says wave heights at Urbnsurf are close to the upper limits of what we’re likely to see from any design in the near future.

“There’s an exponential relationship between the size of the wave and the power you’re using,” he says. “To make a wave double that height, you’re not just using double the power, it’s to the power of four, [because] it’s not just the height of the wave you need to increase, it’s the water underneath the surface.” After a reasonably involved explanation of bathymetry and power transfer, Ross says the easiest way to visualise the challenge is to think of a wave as a triangle, with just the tip above the surface. “The base of the wave is what you need to shift,” he says. “It just gets far too expensive.”

For comparison’s sake, Ross points out that Slater’s wave, which has just hosted its second fully-fledged World Tour competition, is only a little bigger, at 2.4 metres. And, as Ross says, “[Slater]’s having to charge $50,000 a day.”

What will it cost to ride?
Just as a launch date hasn’t been set, Ross explains that neither have prices. “There’s an element here of wanting to offer it at a price that makes it attractive, but also provides a return to investors and covers costs,” he says. Part of the challenge, he explains, is there’s simply no similar facilities for Urbnsurf to compare itself to. “Ultimately, the market will tell us,” he says. “But we are trying to make it as affordable as possible.”

It’s in Victoria. Will the water be heated?
While Ross and his team have explored all options (including the transportation of heat generated by a nearby data centre), they’ve opted not to warm the water.

But while you’ll want to make sure you’ve got your wetsuit in winter, Ross points out several factors that should mean you won’t be as cold as you might be in the ocean.

“Because you’re more active in the lagoon than the ocean, you’re warmer because of it. And you’ll be able to surf without getting your hair wet,” he says. “You’re also below a wall, so there’s a degree of protection from the wind.”

Is it for me?
“Who it appeals to is an interesting brand and marketing problem for us,” Ross says. “You need to attract the core surfers, because they provide the authenticity, [but] a large part of the lagoon is catered to that beginner-intermediate market, because that’s how our business works. We need the beginner areas filled as well as the advanced areas to keep the whole thing going.”

Front of mind is the likelihood that thousands of people who’ve always wanted to surf will ride their first waves at his wave park. “We want people to feel the experience, for it to resonate with them and have some degree of depth,” he says.

“And we want people to hang out here even if they don’t surf, because it’s a fucking cool place. It’s going to be the best place in Melbourne to sit on a deck and have a beer.”

Stay tuned for part two when Broadsheet tests the wave.

Tim Fisher is Broadsheet’s former editorial director, and the longest-serving editor of Australia’s Surfing Life magazine. He is now an editor of ABC Life. 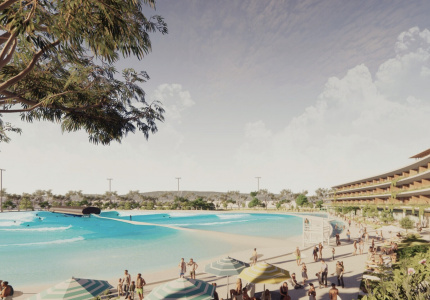