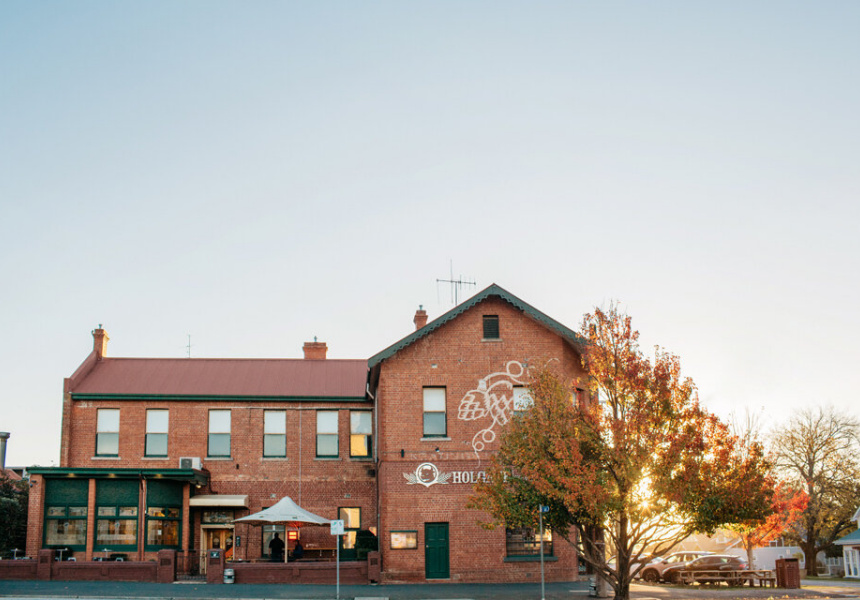 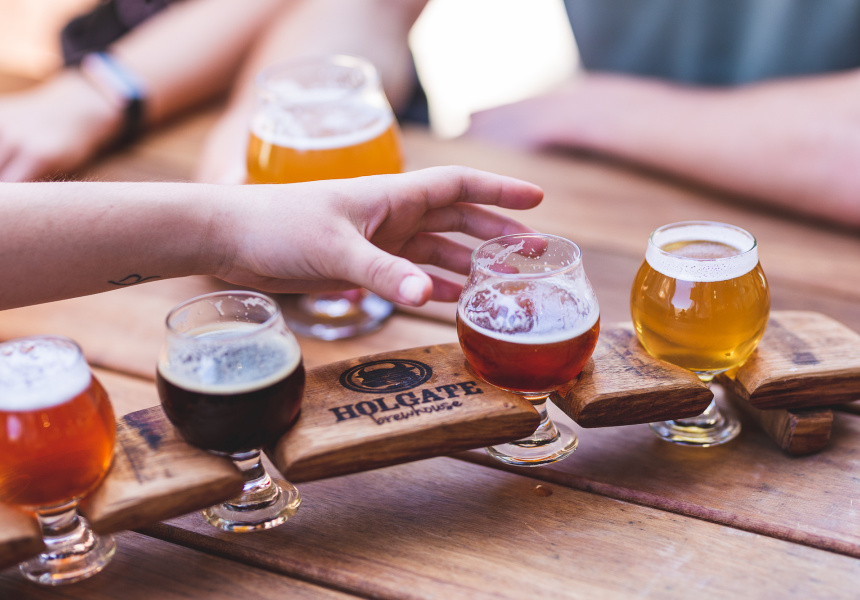 Holgate is one of Victoria’s oldest craft breweries. Founders Paul and Natasha Holgate got started in 1999, 10 years after Mirboo North’s Grand Ridge and just two after Melbourne’s enormously influential Mountain Goat. Within a few years they’d moved into Woodend’s Keatings Hotel, a historic red-brick pub built in 1897, about an hours’ drive from Melbourne (though it’s better to take the V/Line, which stops virtually out the front).

The brewery remains independent to this day, and has expanded with help from crowdfunders and a $1.5 million state government grant. The latter sum was used to open an attached taproom, visitor centre and modern brewhouse at the end of 2019.

While the new, rear building has expanded Holgate’s capacity and capabilities, its soul dwells mainly in the pub’s scuffed floorboards, leadlight windows, small front garden and simple timber bar. The cramped original brewhouse is still there, partitioned behind glass in a passageway near the toilets. Nonetheless, the pub remains a classic local boozer, popular with locals and tourists alike.

The brewery’s core range has evolved over the years and currently includes the extremely drinkable Roadtrip IPA, the clean Draught Lager, the biscuit-y Mt Macedon Pale Ale and the alcohol-free Love All, all available on tap. An English-style extra special bitter (one of Holgate’s earliest recipes) and the smooth Temptress Choc Porter (one of the best dark beers in the country) are both poured via traditional handpump.

Special releases such as wild red ale, sour brettanomyces ale and Beelzebub’s Jewels, a barrel-aged Belgian quad that clocks in at 12.5 per cent ABV, are available in bottles. Don’t expect new beers every time you visit, though. Holgate is more focused on consistency and drinkability than experimentation, or change for the sake of change. This, and the familiar pub setting, make it more approachable than a typical brewery.

Likewise, the pub’s food menu remains aware of current eating trends without surrendering to them entirely. Fish’n’chips, a beef burger and a parma are all available, with smart touches that elevate them beyond the norm. Falafels and vegetarian lasagne are on hand if you want to get outside the pub-grub genre altogether.

Upstairs there are 10 basic, reasonably priced rooms if you’re keen to stay the night and see more of Woodend, itself a pleasant, likeable little town. Breakfast is included.