Produced by Broadsheet in partnership
with Destination Gippsland.

A Guide to a Winter Escape in Gippsland

Follow whales, gorge on truffles, and enjoy genuine Italian cooking this winter. In partnership with Destination Gippsland, we highlight the ideal weekend getaway. 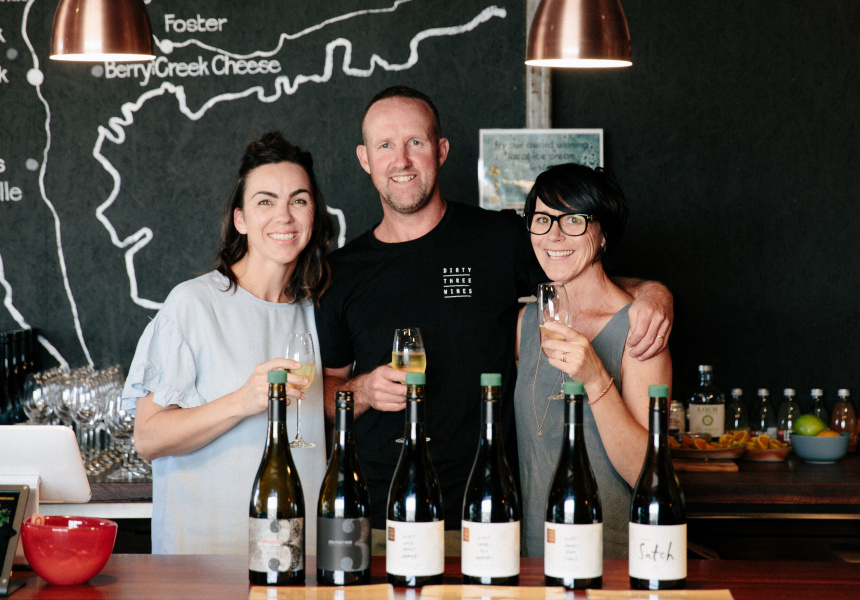 Every chef knows some of the country’s best produce is grown in Gippsland. And while it tastes great on the plates at Melbourne’s best restaurants, it’s even better direct from the source.

The benefit of spending a wintry weekend touring the region’s producers is the chance to sample the local wines and stay in country luxury – and maybe even say g’day to the local whale population. Here’s our guide to doing Gippsland right – including plenty of time soaking up the fresh air and natural surrounds.

DO
Whale watching
Every winter, for tens of thousands of years, one of the world’s great migrations has been taking place off the coast of Gippsland. Beginning in the frigid waters of Antarctica, a convoy of humpback whales, southern right whales, blue whales and orcas cruise up the coast to raise their calves in the (relatively) warmer waters off Australia. More than 60 per cent of the world’s whale population hangs out right here – and that number’s growing every year.

The best time to spot humpback whales is between June and late August – in other words, the duration of winter – as they make their progress northward. The Bass Coast Whale Discovery Trail runs from Eagles Nest beach and its spectacular sandstone rock formation, around the coast past the open beaches, rock pools and seaside village of Cape Paterson, and on to the popular swimming spot and fishing town of Kilcunda. As you cruise the stunning coastline, make time to bike along the Bass Coast Rail Trail, soaking in views of the Bass Strait and adjacent beaches from the Kilcunda Bridge that stretches across Bourne Creek.

Truffle hunting
Beneath the wavelike hills of Jumbunna, under a grove of French oak trees, something delicious is growing: truffles. At The Truffle House in South Gippsland, lifelong horticulturalist Noel Fitzpatrick has been cultivating a crop of black truffles, which he finds with the help of his specially trained (and adorable) Australian shepherd. Fitzpatrick is one of the country’s most experienced truffières; he consults to truffle farmers all over. But during the season – from June through August – you can learn his fungal wisdom on Sundays when you go truffle hunting with his trusty dog, dig up the black gold and taste his truffles (with a glass of wine, of course).

Besides offering a hunting and tasting package, The Truffle House sells a wealth of local truffle-related products, from truffle salt and truffle honey to the much-loved truffles themselves.

EAT
Trulli Woodfire Pizzeria
Make the most of lunch by indulging in an authentic Italian dining experience at Trulli Pizzeria, right in the heart of Meeniyan on the South Gippsland Highway. The ravioli, gnocchi and other pasta is made fresh by owner Francesco Laera, who draws inspiration from the flavours of his hometown in southern Italy. The menu lets mushrooms and seafood shine – and you won’t want to pass up the slow-cooked meatballs or traditional Pugliese-style bruschetta. But of course pizza is the main attraction, with more than a dozen varieties to choose from, from the divinely spicy Agnello – featuring hand-cut lamb ragu, mushrooms, bocconcini, red onion, chilli flakes, shaved pecorino and parsley – to the simple bocconcini-crowned margherita.

You can dine outside even in winter, thanks to the heated and covered al fresco area. Trulli is on break until August 2, so plan your visit for that crucial final month of winter – when hot pizza tastes the best.

The Grove
After all that wildlife watching and wine drinking, you’ll have the appetite of a humpback whale – but krill’s not going to cut it. Instead, head to The Grove in Krowera, a restaurant and bar set in an olive and truffle grove on a 60-acre farm high in the breathtaking Bass hinterland. Championing local produce served in the Spanish tapas style, The Grove focuses on ultra-seasonal food, changing its menu every week and growing its own organic heirloom vegies alongside its very own olive oil.

Open for both lunch and dinner, The Grove is still the new kid on the block, having only opened in February. But its appeal is as instant as it is obvious: you’ll see ingredients from all the best regional growers, such as Amber Creek Pork, Gippsland Natural, Grow Lightly, Red Coral Seafood, Oak and Swan Sourdough, Bassine Specialty Cheese, Prom Country Cheese, Mirboo Farm, Gusto Gelateria and Isola Chianina, alongside the best local booze.

The Grove will be closed until Friday 2 August.

DRINK
Dirty Three Wines
Dirty Three Wines is a project that examines the difference soil can make, comparing and contrasting three different vineyards across South Gippsland – all growing pinot to exacting standards. At Dirty Three’s new urban tasting room in Inverloch you can sample these wines side-by-side, and emerge with a new understanding of Gippsland’s complex terroir. There’s also the option of delving into local gin and craft beer too.

The tasting room hosts live music regularly and has already developed a strong following for its local cheese and charcuterie platters. The idea is to reap all the rewards of a cellar door – make that three cellar doors – at a convenient location smack in the middle of town; in this case, an industrial estate in Inverloch right off the Bass Highway. It’s perfectly set up for a casual visit, but don’t be surprised if you’re compelled to stick around and savour the chilled-out, family-friendly vibe.

Harman Wines
Situated against a small lake just a few minutes north of Inverloch, Harman is run by David and Nicole Harman, who founded the ten acre winery in 2004. It showcases fantastic cool-climate wines against the crowd-pleasing backdrop of woodfired pizzas and live-music Sunday sessions. You can also try tasting platters, local ice-cream and beer, house-made biscuits and a popular haloumi taster.

Consider this the victory lap for a successful weekend. The open space is perfect for bigger groups, but the nearby water and greenery is just as well suited to an intimate dinner.

STAY
Ross Farm Cabin
This place is kind of incredible. What was once a mere cottage on a dairy farm has been transformed by architect Andrea Moore and her father Lindsay into the avatar of Scandi chic. Combining plywood with natural cypress, handcrafted furniture and raw brass, Ross Farm Cabin is at once sharp and soft. There’s an elegant Japanese bathhouse in which to soak away your worries – and for winter thrill-seekers there’s also an outdoor shower. Genuine farmhouse fare can be cooked up in the fully stocked country kitchen.

At the moment there’s only the landmark single-room cabin, but Andrea and Lindsay are hard at work converting the barn and dairy into two and three-bedroom getaways in their signature style – follow their progress on Instagram.

Winter is a time when Gippsland flourishes. Pack the car for a weekend away, set yourself towards the coast, and embrace the rugged region’s attractions before its fireplaces finally cool for another year.

This article is produced by Broadsheet in partnership with Destination Gippsland.

Produced by Broadsheet in partnership
with Destination Gippsland.
Learn more about partner content on Broadsheet. 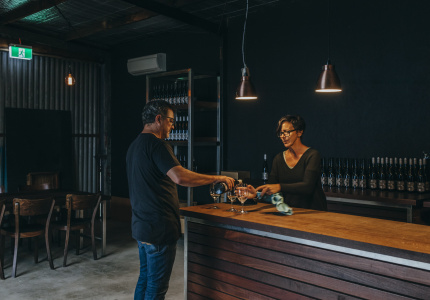