Eating Your Way Around Canberra

Canberra’s food scene is ever changing. We explore a handful of the key players shaping the city’s new wave. 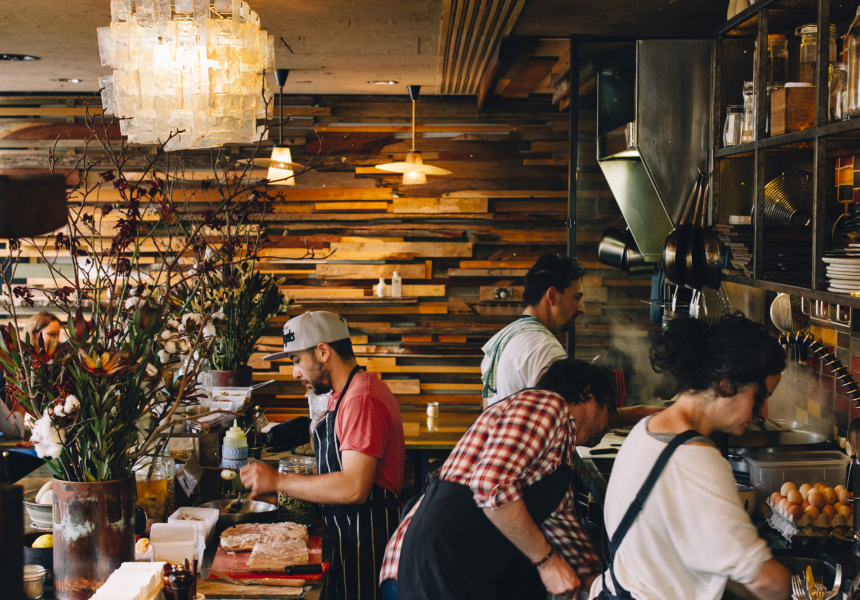 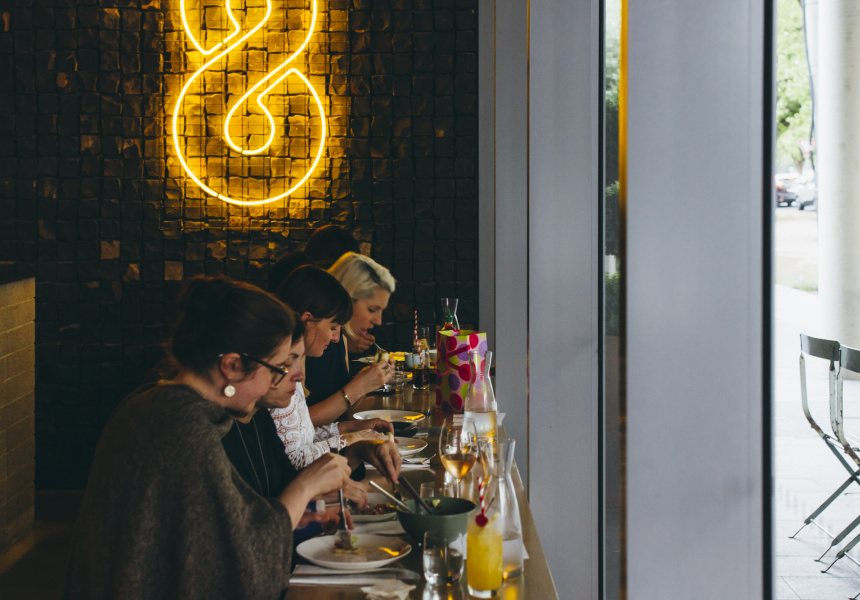 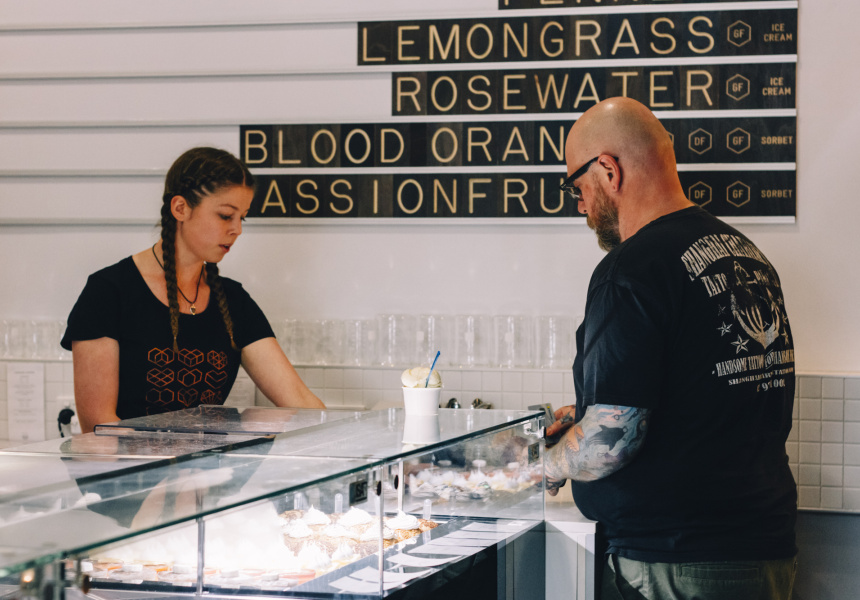 It’s not a stretch to consider Canberra’s food offerings as a concentrated version of Australia’s wider (and most attractive) gastronomic tastes. From early-morning coffee to late-night gelato, the small city is bulging with highlights worthy of a long-weekend inspection.

Barrio is a relaxed cafe on Lonsdale Street in Braddon, centred on great coffee and humble eats.

Opened in June 2015, the trio behind the venture – Sam Burns, Dan Zivkovich and Duncan Turner – make everything themselves, sourcing locally and organically where possible. Burns says their approach is reflective of a wider local movement.

“The last five years feels like a coming of age for a generation of people in Canberra,” says Burns. “We live in a really unique region climate-wise and geographically, but also in terms of population and culture. I feel like these elements are finally being recognised and viewed as a foundation for creating a rich city with a really strong identity.”

Set behind a dining space of rendered concrete, reclaimed timber benches and white hexagonal tiling, Barrio’s tiny kitchen is establishing an identity of its own, with dishes such as slow-braised ham hock and cheddar toastie with housemade mustard and pickles, and rye-cured tuna with a parsnip rosti, kale, manchego and house pickles.

The team roasts its single origin coffees, and Burns is in the process of setting up Barrio’s own dedicated roastery. As well as espresso-based offerings, there’s batch brew, Aeropress and v60s on the filter front; and for warmer weather, there are cold-brew coffee “stubbies” and an espresso, tonic and lime combo.

The team is known to throw fried-chicken-burger pop-ups that draw crowds 10-person deep, who stay into the wee hours. This is in stark contrast to the smaller, more intimate dinners they host with tastings by with local winemakers. One of Canberra’s true all-rounders.

Močan & Green Grout is more than a cafe. It’s a food-growing, bike-making, sustainability-minded design hub, all rolled into one handsome corner plot. Established in 2011, the business on Marcus Clarke Street has been somewhat of a prototype for the NewActon precinct – its wall of wood off-cuts even inspired the greater Hotel Hotel stairwell nearby.

Močan & Green Grout champions all things eco and ethical. Owners David and Rebecca Alcorn and (Rebecca’s brother) Myles Chandler have curated a purposefully localised dining experience that runs from breakfast through to dinner.

The three owners all come from design backgrounds; some of the cafe’s ceramics are made by Rebecca, and Myles made the tables and chairs. They also build bicycles under the label Goodspeed Bicycle Company, with frames designed and made to order in a custom-built workshop just up the lane from the cafe.

Every city has one – the burger joint with queues around the block. In Canberra, Brodburger is it. Run by husband-and-wife team Sascha Brodbeck and Joelle Bou-Jaoude, the flame-grilled burger barn started in 2009, serving from an old, red caravan. It was so popular the pair opened a permanent shop in 2012 adjoining the historic Canberra Glassworks.

Brodburger has a cult-like following, drawing everyone from teens to government types on their lunch breaks. Others ring ahead to place bulk orders, carting away more than 20 orders of burgers and fries in reused cardboard boxes.

Brodburger’s large burgers come in classic combos of beef, cheese and sauce; newbies include piri-piri chicken and beef, bacon and slaw. They also do a Brod Mama burger – a well-done patty for expecting mothers – along with gluten-free buns and mini sizes for the petite. All burgers come with fries, onion rings and salt and pepper calamari.

The downside to Brodburger’s popularity is there’s usually a line and a wait of 30 minutes or more. But when ordering, diners receive buzzers with a range of about two kilometres, so you can wander down to the lake foreshore to wait and salivate.

This all-day bistro in Canberra’s city centre is the creation of Ben Willis and Chris Darragh – Willis also runs acclaimed restaurant Aubergine, where Darragh was sous chef for five years. The pair opened Temporada in February 2013, with Darragh taking the reins on this sister venture. It’s the kind of welcoming place where you can pop in for breakfast or lunch, takeaway coffee, or a sundowner beverage.

The menu can change daily, speaking to the name’s Spanish origin, meaning “season”. The kitchen team works closely with local farmers and producers to know what’s coming up in the garden, translating regional produce into punchy share plates.

It’s not strictly European in influence, with dishes such as grilled lamb-tongue with honey and rosemary meeting wood-fired corn served with miso and furikake, or fried green garlic with romesco sauce. Breakfast is paired with coffee by local roaster Two Before Ten, while lunch and dinner is covered with small dishes, mains and sides. The wine list is an eclectic range of left-of-field, minimal-intervention numbers from local vineyards and overseas.

Since 2013, eightysix has been drawing a steady stream of locals and gastro-tourists to Braddon, all served to a hip-hop soundtrack.

“Our restaurant broke the mould,” says owner Gus Armstrong. “Before us the high-end of dining in this town was quite conservative, but our success was a gateway for other adventurous operators to do the same. Now owner-operator restaurants are more personal and pure.”

eightysix’s menu is scribbled on the blackboard bordering the dining room, and shifts with the day’s available produce. Kitchen standouts include steak tartare with spiked with habanero; tender rounds of kangaroo with horseradish, beetroot and balsamic; pappardelle with oxtail ragu; and black-chicken and buttermilk slaw. There’s gluten-free and vegetarian offerings on the menu, as well as an $86 all-you-can-eat option.

Armstrong presides over an attentive but fun environment, and the team is friendly and efficient. If you’re a small party you can sit alongside the floor-to-ceiling windows at the front, or overlook the kitchen’s handiwork. There are small tables and booths in the main dining space, and there’s also standing room for a drink at the front. The restaurant is often booked out, so an earlier sitting is recommended if you want a crack at the entire menu (before the most popular dishes are ‘eighty-sixed’ – aka crossed out, as the name suggests).

“From street food to cafes, the current food scene in Canberra is rocking,” says Armstrong. “We've come a long way in the last five years, and it's exciting to be a part of.”

John Marshall opened Frugii Dessert Laboratory inside Lonsdale Street Traders on the main drag of Braddon in January 2015. Here, Marshall serves desserts in small batches, meaning what’s available on the board might change three or four times per day.

Among the range are sorbet, ice-cream and gelato (yes there’s a difference between those last two – the latter lacks egg), including vegan, dairy-, gluten- and nut-free options.

Vanilla bean, dark chocolate and salted-butter caramel are the mainstays of the menu and are always available. But there’s also what Marshall dubs “the other”, which may include flavours ranging from sweet fennel, lemongrass, dirty chai and tonka bean, to savoury experimentations such as black garlic, roast potato, butter chicken and seafood laksa. Pro tip: you can try as many flavours as you like, which makes the difficult whittling-down process much easier.

Frugii is also recreating the icy-pole and paddle-pop for adult appetites. The orange ice-cream stick is a medley of coconut cream, fresh cream, orange chocolate and Southern Comfort liquor, while icy poles come in sangiovese wine and freeze-dried strawberries, or gin and tonic. They’re soft and delicate, similar to sorbet in consistency, and not at all like the crunchy, watery tuck-shop numbers.

Where other gelato wizards might fly-in pastes and bases from the Italian masters or other faraway lands, at Frugii it’s all made in-house – from the bases, extracts, powders and pastes to freeze-dried ingredients and chocolate. They also source as locally as possible for their ingredients, including Riverina Fresh Dairy for the milky base.