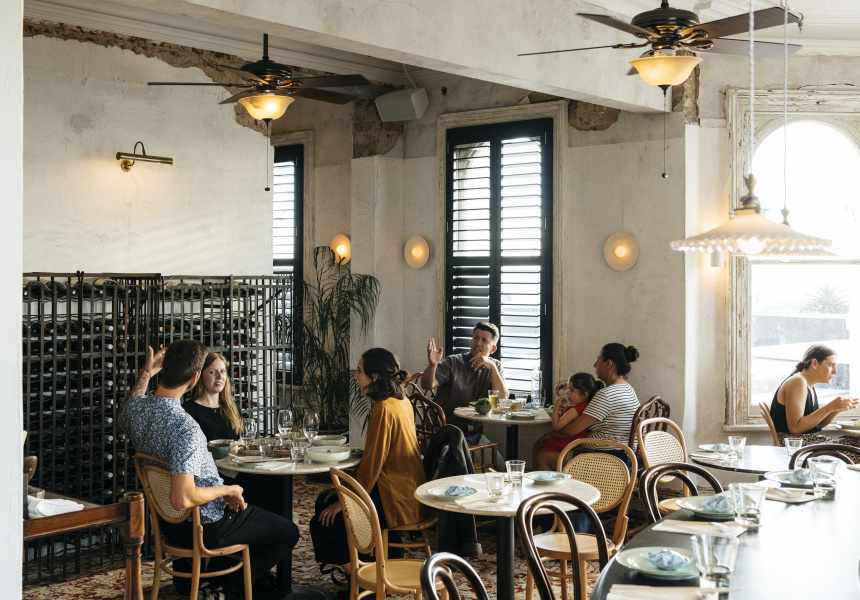 Up the ornate stairs beneath a glittering chandelier at the Esplanade Hotel’s there are two floors (that for years before the hotel’s redevelopment – which was unveiled in December 2018 – were closed to the public) that are home to two cocktail bars The Green Room and Ghost of Alfred Felton) and Cantonese diner Mya Tiger.

Mya Tiger has city and bay views over the tops of palm trees. If people-watching is more your thing, then high tables offer a view down to the stairs and bar below.

The menu has nods to Chinese classics. Snacks include five-spice ribs and cumin lamb spring rolls. Raw kingfish is given an umami-rich, smoked-soy and truffle treatment, while the bao and dumpling menu features staples such as pork and chilli wontons and char siu pork bao. Larger dishes include XO pippies; steamed fish with ginger, soy and shallots; crispy pork noodles; and a whole roast duck.

The wine list is built around the flavours of Cantonese cooking, avoiding oaky whites and high-alcohol reds. There’s a number of options by the glass, and by the bottle you’ll find a mix of local and New Zealand producers along with classic internationals: German riesling and malbec from Argentina. There’s also a refurbished old fridge you’re encouraged to grab your own beer from. There’s Kirin and Asahi, and also more esoteric beers such as a seaweed sour beer from Sailors Grave Brewing, or the Dawn New England IPA from Hop Nation. Cocktails put regionally suitable twists on classics, such as Shiso-Shiso Mule, which features gin, passionfruit, shiso, lime and elderflower. There’s a kaffir lime Margarita, and the house Espresso Martini has an oolong tea infusion.