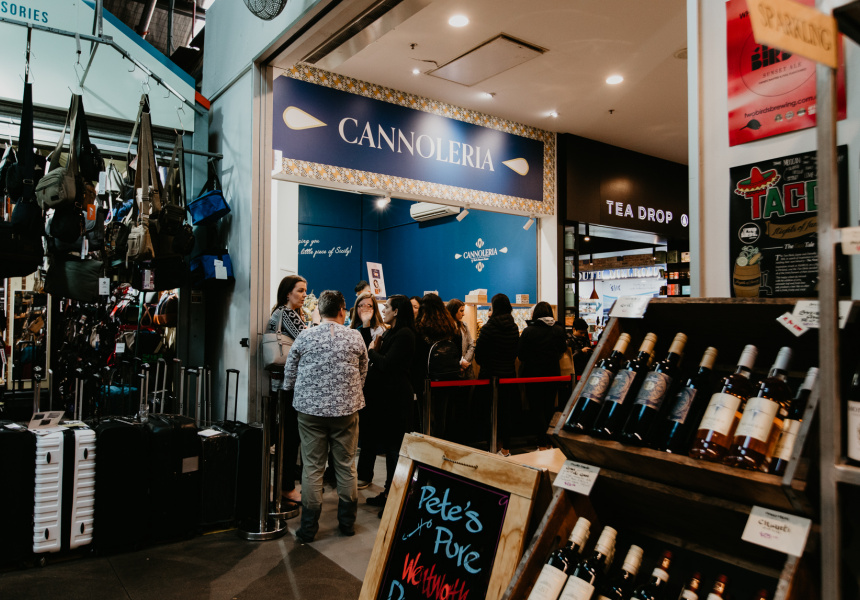 Italian-born Giorgio Linguanti has been hand-making burrata, mozzarella, ricotta and more since founding Thomastown cheese factory and shop That’s Amore in 2008. After a number of years churning milk, his Sicilian heritage inspired him to develop Cannoleria by That’s Amore – a sister business devoted to the iconic Sicilian dessert.

Before this cannoleria opened in mid 2019 Melburnians could only buy these delicate golden tubes at the original spot, and at occasional pop-ups. But these permanent digs, opened with chef Dario Di Clerico, changed all that.

The shop has touches of the That’s Amore’s signature lemon-yellow, deep-sea-blue and white. The store is small but mighty, with a wooden L-shaped counter. One arm holds cannoli stacked in little towers in a glass cabinet. The other has just enough room for a cash register. On the back wall a Scrabble-style menu lists the flavours of the day.

Ricotta is produced in the Thomastown cheese factory each morning and is then mixed with different ingredients until smooth and piped into cannoli.

Here you’ll find traditional flavours – ricotta, pistachio and chocolate, lemon, or chocolate – and the more adventurous – peanut butter and jelly, berry and white chocolate, and Bacio with hazelnut and crushed Baci chocolate. Prices are $5 for one large cannoli or three for $12. There are mini cannoli, too, for $2.50 each (or five for $10).

The team has also experimented with salted-caramel popcorn, Vegemite and truffle-infused ricotta.

Cannoli is the only hero of this store – there’s no coffee or tea.