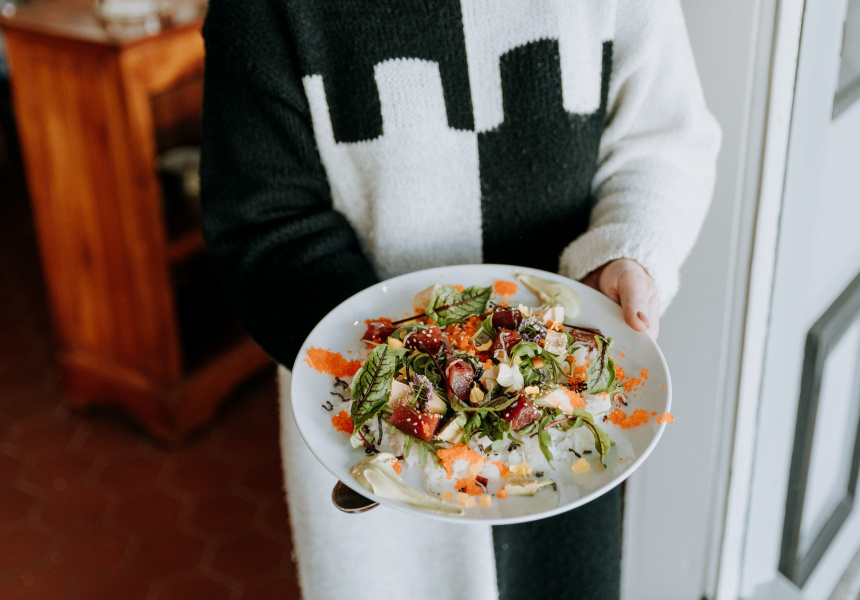 One of Monou’s most spectacular dishes, just like Monou itself, appears relatively modest on the surface. A hefty triangular slab of steamed fish cake is balanced on a raw cherry tomato, a knot of potato noodles and a thick round of tender daikon, anchored by a toothpick. The daikon has been cooked in a lush chicken and bonito-dashi broth, and is topped with a spoonful of seeded mustard. It doesn’t look delicate at all, but it tastes it.

This bowl embodies Monou’s deft blend of endearing and refined, bold and delicate. The fit-out is stylish and restrained. The only art on the alabaster exposed-brick walls is a handful of empty bronze-coloured frames. Overhead, there are two huge ceiling fans with Japanese hand fans for blades. Dark timber and black leather chairs sit in neat rows.

The casual diner is owned by husband and wife Tatsuya and Sumire Kawakami, who also own relaxed brunch spot Kuu, just down the road.

Sumire heads up the kitchen team. Tatsuya can usually be found at the restaurant too, often with new baby daughter Monet strapped to his chest.

On top of the bar, which resembles a shoji (a traditional Japanese sliding door), vases of native Australian leaves sit beside four big jars of seasonal fruits floating in shochu, a distilled spirit which Tatsuya describes as “Japanese vodka”. Sumire adds kumquats to flavour the spirit, just like her parents do at their almost 40-year-old restaurant in Shibamata, Tokyo.

At Monou, the food is inspired by those days in Tokyo, but there are western influences too.

Monou’s crowning glory is the scampi, which stares up at you from its bowl. It’s lightly seared and served with eggplant, dill and soft bonito-dashi jelly. It’s quirky, cute and mind-bogglingly intricate in flavour.

Finish your meal with a silky houjicha, a green tea with leaves roasted over charcoal (most green teas are steamed), or matcha latte. For something left of field, Tatsuya will joyously direct you to the menu of organic Japanese teas that he imports directly from Japanese farmers.

He’s particularly enthusiastic about the gyokuro (the same one that’s sprinkled over the fried gnocchi). It’s a vivid green due to being grown in the shade, and yields a sweet flavour.