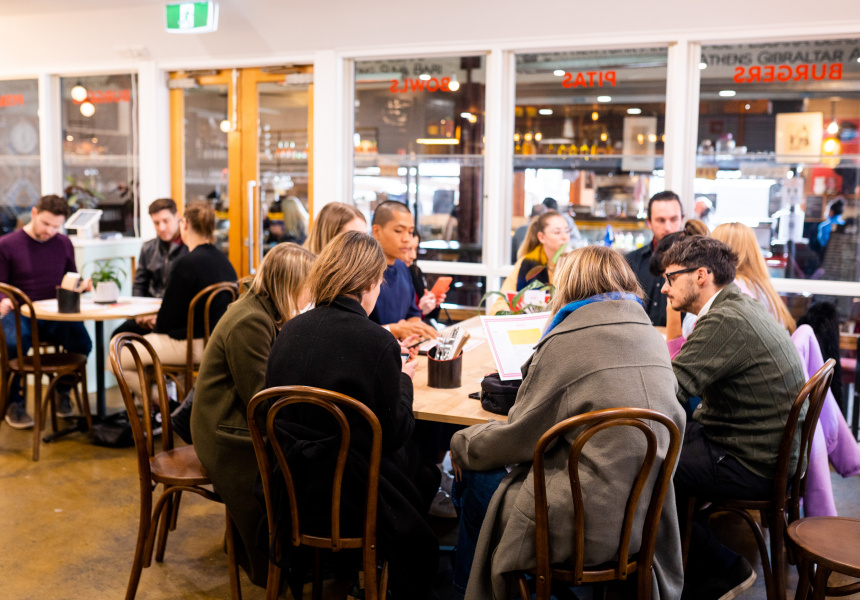 Dehne Bingham knows the burger business. He was director of purchasing and distribution at A&W, Canada’s second-largest burger chain after McDonald’s. And back in Australia, he was the head of supply chain at Grill’d and the former CEO of Belles Hot Chicken. At Marko, he’s serving up the products he knows best; taking plant-based ingredients and presenting them as familiar comfort foods.

He’s worked with Charley Snadden-Wilson (ex-Etta head chef and Embla sous chef) to develop the vegan-friendly menu. Think green-pea falafel pita pockets with quinoa tabouli, and corn ribs topped with crisp chilli. There’s also a handful of veggie-heavy bowls built around whatever local produce the team can get its hands on – much it from the surrounding South Melbourne Markets.

Really though, it’s all about the stellar burger. It features Marko’s signature house-made patty, containing a blend of Mount Zero lentils, mushrooms and beetroot. Crisp cauliflower is also an option (it’s steamed and coated in chickpea flour before being fried).

To drink, there are lo-fi wines, local tinnies and cocktails such as the Marko Mule and Whiskey Yuzu, shook up with Patient Wolf and The Gospel. Plus, low-ABV options including the (Not) G&T made with Brunswick Aces’ booze-free gin.

The bright, white-walled space has plenty of room for dining (or drinking) in. Otherwise, there’s a counter outside for quick takeaway.