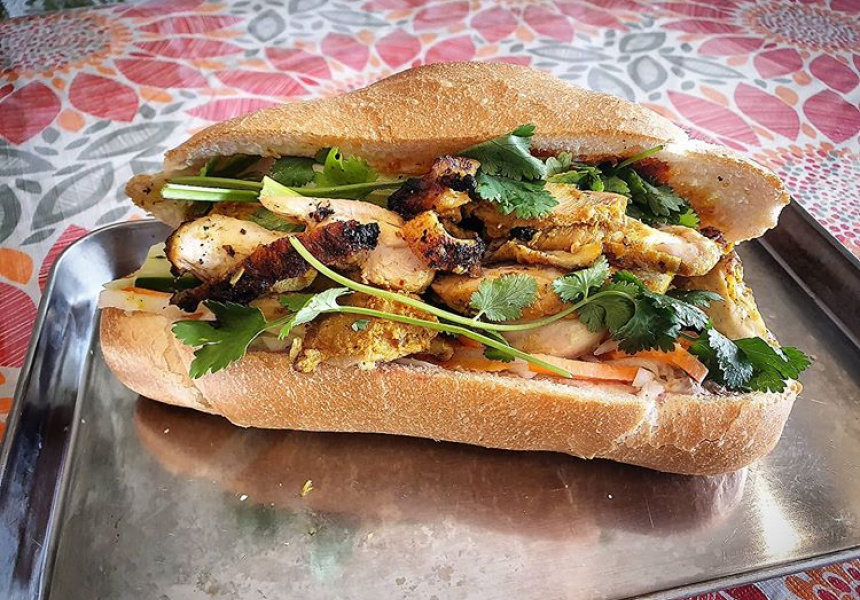 Post-lockdown, Ca Com will be open for dine-in, with breakfast counter seats around the small space. There’ll be a longer sit-down menu and rotating salads in addition to the takeaway banh mi.

Ca Com is a banh mi shop by Thi Le and Jia-Yen Lee, the pair behind modern Vietnamese restaurant Anchovy (which is just next door).

During 2020's prolonged Covid lockdown, the Anchovy team started serving khao jee pate – a similarly baguette-based street-food sandwich that’s Lao in origin. Eventually they transitioned to serving banh mi out of Anchovy’s window, a move that proved so popular they kept it on as a Saturday-only special between lockdowns. But running a restaurant and a banh mi pop-up simultaneously – and out of the same space – was a challenge. So, when the massage parlour next door became available, Lee and Le took over and got to work, fitting it out themselves wherever possible.

Popular menu items now include the turmeric chicken, the jungle pork sausage and the Manchurian pumpkin (it’s coated in a blend of Chinese and Indian spices, then roasted on the hearth). While the flavours change, there’ll always be at least one chicken and one vegan option. Pork, too – the team gets whole pigs in, so expect cuts such as belly and neck; secondary cuts and the skin will go into sausages.

There are also rotating specials. In the past there’s been a “banh stra-mi” with Warialda Beef pastrami, and fillings such as bacon and egg, mortadella from LP’s Quality Meats, pig’s head terrine, and crumbed garfish stuffed with chao tom (prawn mousse).The mainstay banh mi are around $13 while specials wgo for just north of $20,