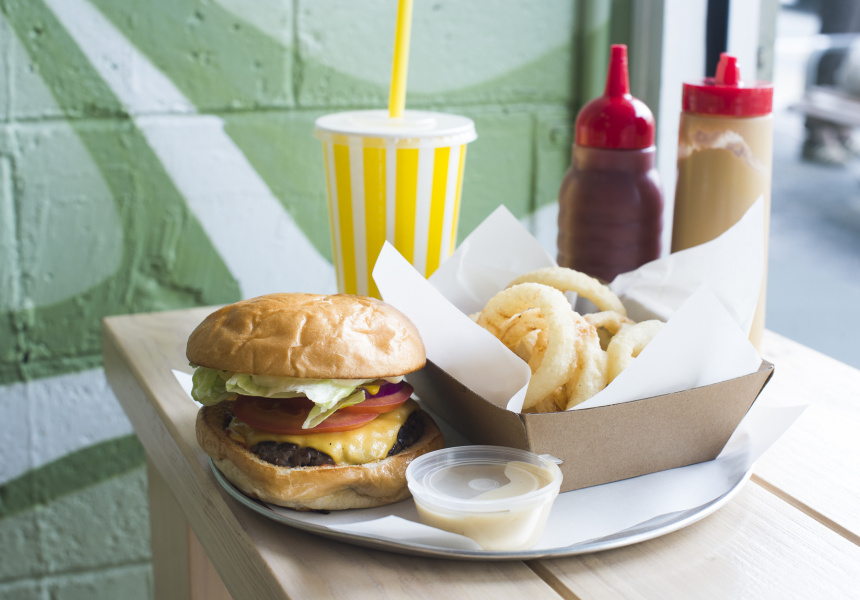 Ten per cent fat and 90 per cent meat. That’s the golden ratio that underpins Son Nguyen’s burger patties and lends his business its name. It landed on Swan Street in mid-2015, after a year operating from a trailer around Northcote.

This casual, outdoor DNA is evident at the former charcoal chicken shop. The folding chairs look readymade for a picnic; and a feature wall depicts carp swimming among lotus flowers.

The all-important burgers use grass-fed Black Angus sourced from Mt Beauty. It’s aged for 60 days, minced on site daily and formed into patties by hand, not machine. As at Neil Perry’s Burger Project, Breadtop’s brioche is the bun of choice.

Unlike a lot of burger joints, which emphasise minimal seasoning or flavouring, 1090 uses a secret nine-ingredient marinade to bump up the umami profile of its patties. Only two people know the recipe.

This marinade is at its most vivid in the simple cheeseburger. The 1090burger (single or double) adds some sharpness with lettuce and red onion. Then there’s the Thunderburger, made for proper fiends: double patty, double cheese, bacon, chilli mayo, ketchup and pickles. Other staples include a fried chicken burger; and taro-and-potato veggie burger.

Once you’ve ordered at the counter, take a seat and wait with a Stone & Wood Pacific Ale; a Feral Hop Hog or a salted-caramel shake.