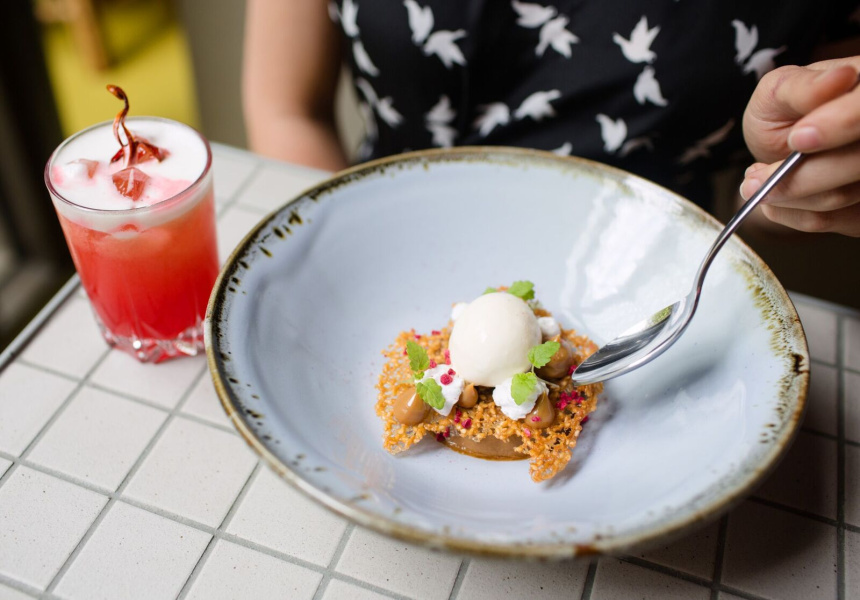 In 2016, Rene Spence and Dai Duong opened an outpost of their modern-Vietnamese restaurant, Uncle, at the Paris end of Collins Street.

The second location doesn’t deviate too much from the original Uncle in St Kilda, although it is slightly more upmarket to suit the surroundings.

Adèle Winteridge, director of Foolscap Studio, designed the restaurant space, which was converted from offices. Uncle Collins Street is slightly smaller than its south-side counterpart, and built over one level as opposed to three. Large fold-out windows open to leafy, treetop views, and cane furniture and pink and orange lights create a fun, tropical vibe.

As in St Kilda, a large central bar is a key feature, as is the colourful ceramic crockery made by Spence’s wife, under the label Fork Ceramics.

The biggest change between the two venues is in the menu. Some favourites made the journey, such as the pig’s ear banh mi, the hapuka betel leaf, the black wild rice, and the pho.

One of those dishes – burrata with heirloom tomatoes, pickled papaya, Thai basil and puffed wild rice – is the only one (for the moment) to feature Duong’s experimental whisky-barrel-aged fish sauce. He’s been aging it for five months so far, and it’ll make its way into more dishes when the current batch is mature enough.

Cocktails include the Mekong Splice with white rum, mango sorbet and coconut foam, and The Paris End, made with gin, basil syrup, lychee, bitters, lime and prosecco are new.

There’s also a list of largely Victorian wine and beer, including a Stomping Ground lager and a Bad Shepherd pale ale on tap.