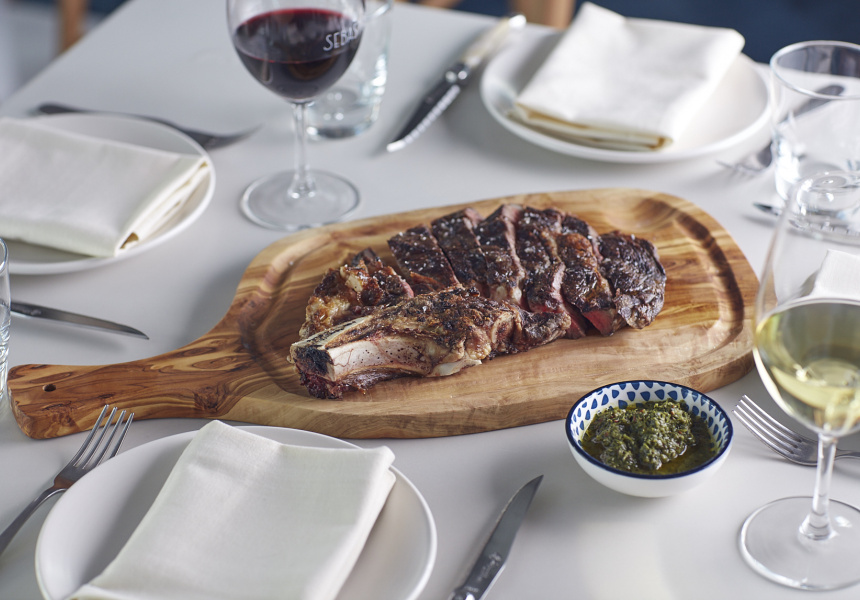 This enormous shoreside diner brings the food and booze culture of San Sebastian to Williamstown. The project is by Dave Parker, the serial restaurateur behind San Telmo, Palermo, Pastuso, Neptune and the recently opened Asado, and his childhood buddy, Alex Brawn.

The building is split into two wings bisected by a central rotunda. What was once an old Art Deco changeroom has been transformed into a white-and-blue oasis, with a sleek diner in one half and a more casual bistro in the other. There’s a row of tastefully tan banquettes, touches of light oak, and a custom-poured concrete bar.

The medium-sized tapas selection includes albacore ceviche with a blood-orange reduction, Spanish rice with Cloudy Bay clams and tarragon, and a house-smoked pork jowl with a side of cornbread. The woodfired grill cooks O’Connors pasture-fed black Angus steak weighing in at an enormous 1.2 kilograms. This hulking slab of excellent meat is served simply with a small pot of chimichurri. Sebastian’s signature is the whole flounder smothered in burnt anchovy butter and served with crisp butter beans.

The drinks involve Patagonian pilsner on tap; Iris Rojo, a sweet red Spanish vermouth; and unusual and delicious Basque wine varieties such as txakoli, a gently sparkling white, and an albarino from nearby Galicia.