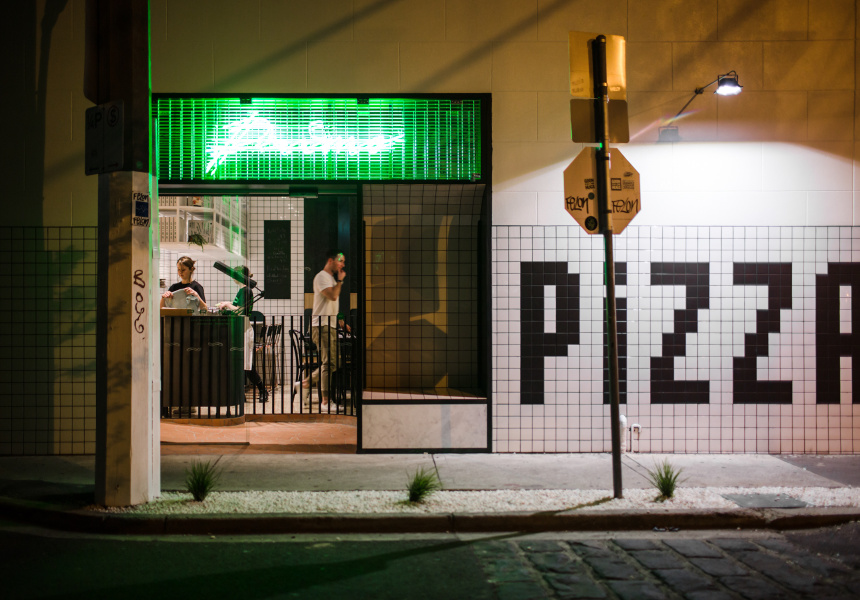 Even when you’re already inside and eating at Primo, you’re reminded you’re in Primo. That’s thanks to the huge, pointed finger spinning pizza dough in yellow neon over the street-side window.

At Primo the lights are bright and the music is a party playlist. Chefs, visible from the bar, in vivid-green T-shirts roll out the bases.

This pizza restaurant is from Loren McBride (who founded nearby cafe Barry) and her husband Jamie (Mammoth, Touchwood and Gilson). Jemma Richards and Iza Dawkins are also partners in the business.

There’s the Roberta (named after the Roberta’s in Brooklyn), with pepperoni, cream, chilli and honey. There’s also a “salad pizza”. It’s exactly what it sounds like, and comes out looking like an actual garden, flowers included.

The Jon & Vinny's is named after a diner in LA. It comes with sweet-ish Christmas ham, pickled chillis and shavings of pineapple (not chunks) that have been soaked in vodka. It works.

There are snacks, too; a hoagie sandwich, a cheeseburger and a couple of kids dishes. There’s free delivery on orders over $25, and Primo can send over booze, too (including a bottled white Negroni).

Marble terrazzo on the floors and green leather booths and banquettes are the Italian touches. There’s also a pink-tiled loveseat outside by the door – a good spot for sharing a soft-serve in the warmer weather.