It was only the sixth Miznon in the world, after Tel Aviv, Paris and Vienna. Melbourne first came onto Shani's radar when his friend and now business partner Ron Lazarovits cajoled him to visit. He was also impressed with the local produce, which inspired several new creations on the menu, including the Bag of 7 Species of Green Beans, a vegetable salad that Shani lightly cooks with garlic, lime and Mount Zero olive oil.

On the topic of Miznon’s culinary focus – pita – expect pockets with blood cabbage sausage and rice; steak, egg and avocado; the extraordinarily well-named Intimate Wagyu and Roots Stew; and a falafel burger. The soft and fluffy white pitas are prepared off-site at Brunswick’s Alasya Turkish bakery by baker Ismail Bekir.

Out-of-pita options include hot chickpeas “melting on tahini” with a hard-boiled egg, and a simple baby cauliflower, roasted whole (leaves and all) with a bit of olive oil and served on paper to share.

Yacov Turjman oversaw the diner’s design, with funky second-hand furniture, ornamental musical instruments and a comical abundance of ceiling lights. A long, narrow open kitchen juts out into the restaurant like a deli counter, with bench space and stools in front.

The two-storey space speaks to Shani’s simple yet timeless brief: have fun, no matter what. And, if you’re not already convinced on this point, there’s a bleacher-style dancing area and beers on tap to seal the deal. 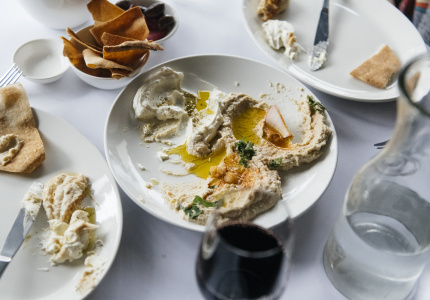