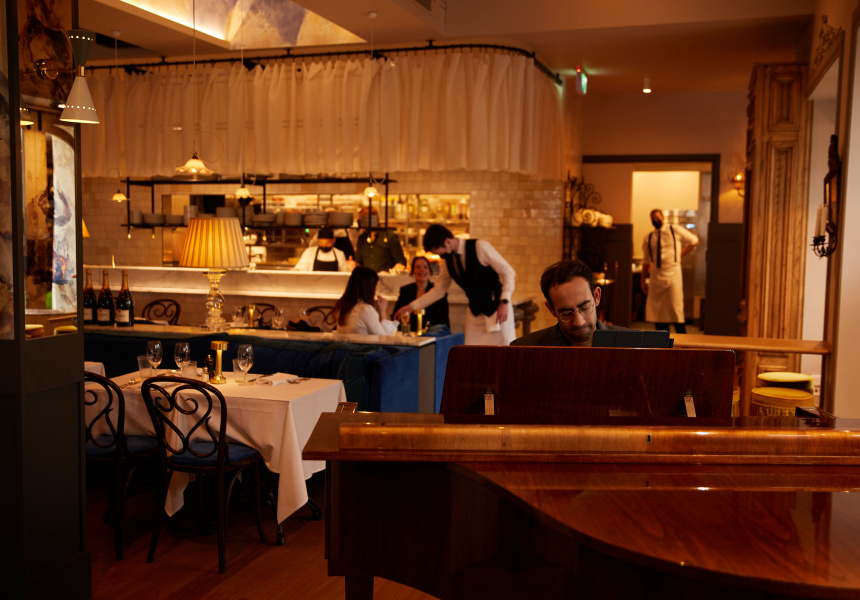 When it opened on Domain Road in South Yarra in 2014, French restaurant Entrecote quickly became a destination for semi-formal dinners, post-Tan drinks and Parisian-style picnic packs. Funnily enough, it was never meant to be permanent – Entrecote started as a pop-up. After a solid run in South Yarra, it moved to Prahran in 2021.

In its more spacious Greville Street location, Entrecote took on its full form. There’s room for more than 200 people between its brasserie, dining rooms and courtyard (which draws inspiration from Paris institutions like Hôtel Costes and Ralph’s). Designed in collaboration with Jones’s partner Brahman Perera, the venue is awash with green-and-white-striped awnings, wicker seats, lantern lights and tile floors.

While the restaurant’s signature steak frites with herb sauce is the star of the menu, Prahran upgrades included a lobster frites, a raw seafood bar, and a roving trolley serving caviar bumps with frozen vodka. Plus, a late-night supper menu perfect for soaking up the grog at midnight.

If you want to keep the party going, there’s plenty for that, too. Joe Jones of Romeo Lane is behind the drinks menu, which features a range of French-inspired cocktails.

To add to the ambience, there’s live jazz Thursday through Saturday nights, and a DJ spinning French vinyl on Fridays and Saturdays until late.