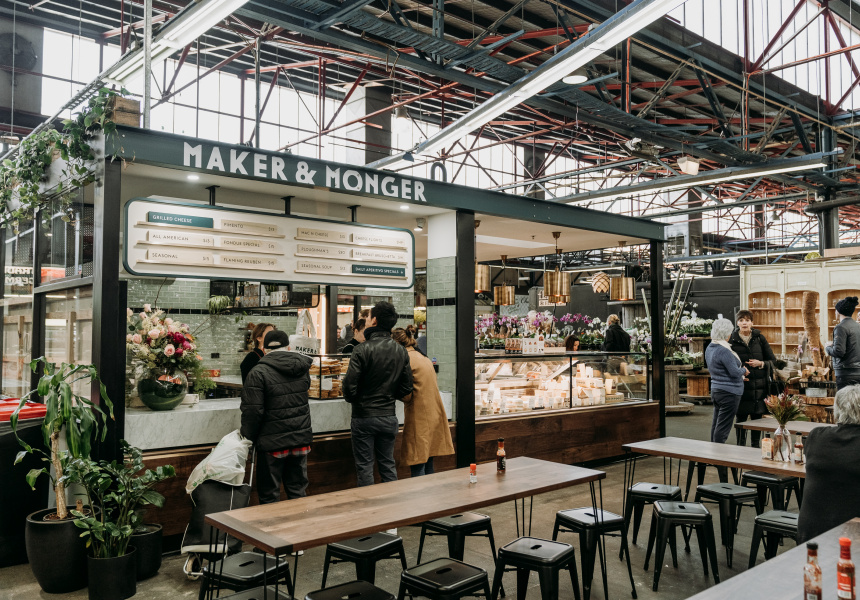 Anthony Femia’s self-coined “chapel of cheese” first launched at Prahran Market in 2015, as a food cart. After a few years though, demand was high enough to warrant an expansion. In 2019, Maker & Monger opened up a permanent home as a stall in the heritage harvest hall.

Spend just a short time standing near the stall and the magnetic pull of its seven-metre-long cheese cabinet will quickly become obvious. Boutique cheeses from around the world are stacked high inside, ranging from creamy gorgonzola scooped to order to huge wheels of Parmigiano Reggiano. It’s hard to resist.

Favourites including the original and signature Swiss raclette and the All-American grilled-cheese toastie (two American cheeses, onion and parsley) are all unchanged, but the larger space has allowed for the menu to grow substantially.

Now, newer highlights include a breakfast bruschetta with labneh made in-house from Butterfly Factory yoghurt. It comes with candied cumquats, thyme and honey. The Ploughman’s Lunch consists of ham off the bone, hunks of English cheddar, a couple of homemade relishes and some pickled vegetables. The Calabrese toastie is smoked scamorza, ‘nduja and oregano. It sits alongside Femia’s existing signature range of grilled-cheese toasties, each one gooey on the inside, crisp on the outside and sprinkled with a pinch of salt.

Just as much attention has been paid to the takeaway cheese selection. Some of the best cheeses in the glass cabinet include a Montgomery’s clothbound cheddar from Neal’s Yard Dairy in the UK and a soft and crumbly Langres, a cow’s milk cheese from the French region of Champagne-Ardenne, which Femia recommends pairing with a pinot noir.