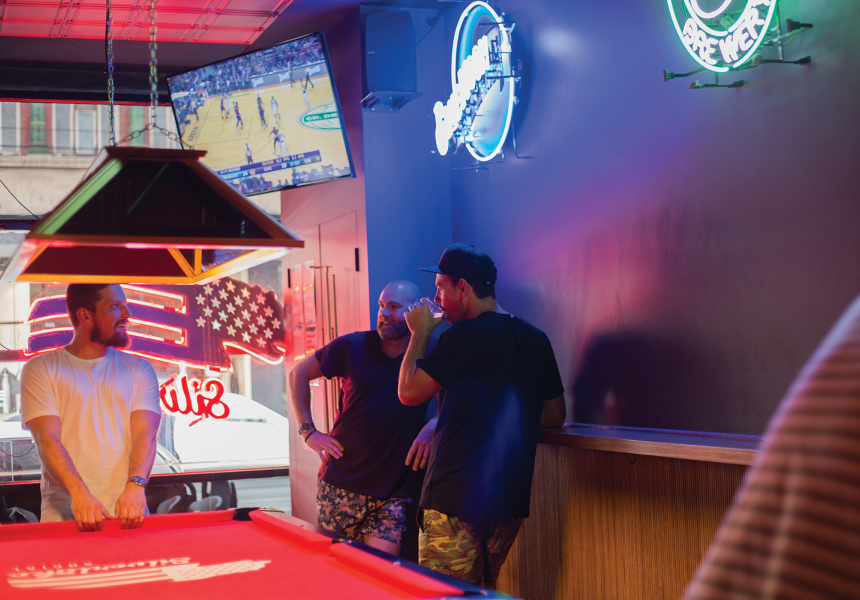 Silverlake Social is inspired by the watering holes of California.

Named for a suburb of LA, Silverlake Social is by brothers Nick and Tom Welch, who also own White Oaks Saloon on Greville Street, and Byron Barrowclough.

There are elements you already associate with an American dive or sports bar: NBA and NFL on the TV; NWA and the Eagles on the speakers; a pool table; neon; and enormous beer taps, but it still feels refined. A long, brown-leather banquette runs down one exposed-brick wall, its edges curved to replicate booth seating.

There are more than 25 packaged beers (including American classics Pabst Blue Ribbon, Budweiser and Sam Adams, plus more boutique selections such as Salitos Tequila beer and Lost Coast Sharkinator IPA), plus the taps. Blue Moon, Brooklyn Lager and four other American beers are on tap, along with a local cider and Mornington Lager.

There’s a short wine list, and a longer list of shooters, boilermakers and cocktails. The cocktails are mostly tequila or mezcal-based, such as a mezcal Negroni, and a Mission Beach Cooler with tequila, coconut, mango and lime. There’s also a Woodford Reserve Old Fashioned for whisky fans.

To eat there are hot dogs; burgers; ribs; steaks; a pumpkin burrito; and a baby beet and ricotta salad.