Crisp mountain air and a bountiful food scene await you in the High Country. 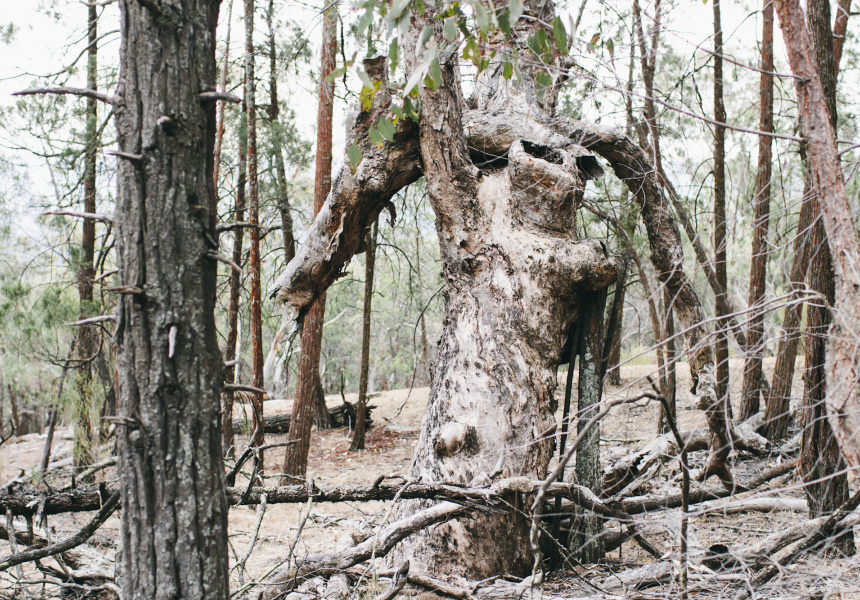 There’s something exhilarating about rising before dawn and leaving the city to arrive in a new setting before breakfast.

If you’re thinking about doing just that, then Beechworth is a particularly good-looking destination to point the car towards. With its preserved gold-rush-era architecture set among the undulating landscape of the north-east, it’s a beautiful spot with plenty to keep you occupied for a weekend or more.

The autumn scenery is peaceful and majestic. In winter, nearby Mount Buffalo is blanketed with snow. There’s a great cycling culture here – both slow and leisurely – the old rail tracks have been converted to bike trails, so you can coast between wineries and restaurants. There are also steeper climbs for the altitude-minded adventurer.

Provenance, a highly awarded restaurant inside a grand former bank built in 1856, is a draw in itself. But the region is home to an array of worthy food experiences. The fertile soil and cool climate mean the area is rich with vineyards and farms. Stanley is renowned for its chestnuts and apples, while Beechworth counts many cellar doors (and a great brewery) among its charms. Between the numerous roadside farm gates and the provedores, you’ll return to the city with a sizeable bounty.

From a pub meal, to a vegetarian degustation, the High Country matches locally grown produce with with French, Italian, Spanish and Japanese influences. The Ox and Hound Bistro

Hearty, honest French and Italian fare in a cosy milieu. 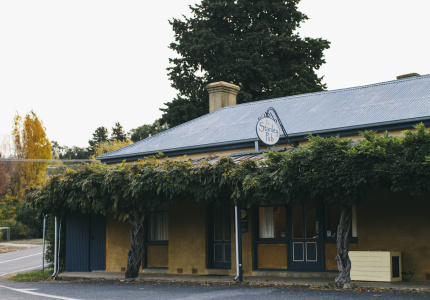 A humble country pub with a grassy beer garden just up the hill. House-made dashi, miso, pickles and ferments are the hallmarks of this decade-old fine diner by chef Michael Ryan, who spins hyperlocal produce into creative, Japanese-inspired dishes. On the floor, his wife Jeanette Henderson pours matched sakes and local wines.

A dozen cellar doors are just the tip of the cool-climate wine trade around Beechworth. Small-scale vineyards are championed on the menus of local restaurants and bars, too. There are also clever folk brewing beer and roasting coffee, too. 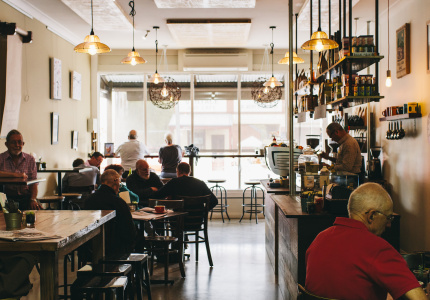 Single-origin coffee, roasted right where you drink it. 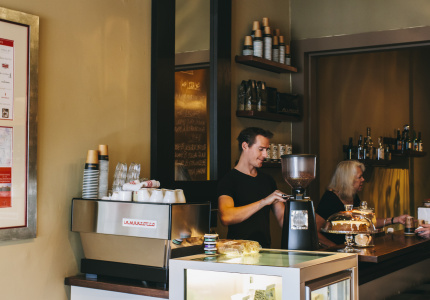 Drink in, or take home. We suggest the former, seeing how there’s coffee, charcuterie and cheese too. Grazing platters and cool-climate wines at the base of Mt Buffalo. Cycle between farm gates and cellar doors, or take to the hills on foot to explore the natural terrain of this mountainous pocket. Reward your efforts with a spa treatment, or curl up in front of an open fire. 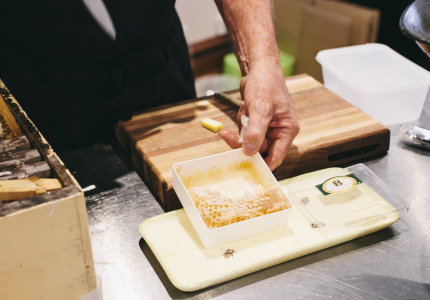 Taste honey and mead and learn about the pivotal role bees play in our greater food system. 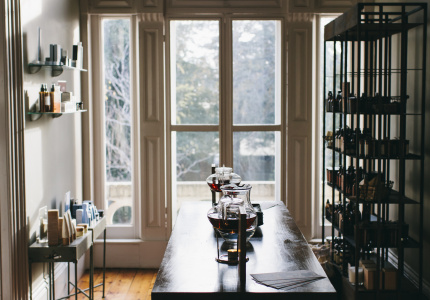 Arriving in front of the historic Mayday Hills property feels like you’ve accidentally driven onto the set of The Great Gatsby. 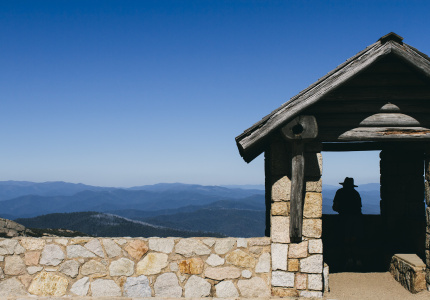 It’s roughly an hour’s drive – winding up the mountain – to the top point, The Horn, followed by a short hike (45 minutes return) to the summit. Your reward is a 360-degree view of the Australian Alps. There are plenty of short walks on Mount Buffalo, so you can pack a few into one day, punctuated with a picnic lunch by Lake Catani. In summer you’ll see wildflowers, and there’s snow (and skiing) in winter. Beechworth Historic Park is a sprawling reserve rich in local gold-mining history. Various walking tracks weave through dry forests of strawflowers, eucalyptus and native cypress pines, and over granite outcrops. The Precipice lookout offers a view of the former Reid’s Creek goldfields. You can drive, cycle or walk along the five-kilometre Gorge Scenic Drive – the uninterrupted view of the horizon at the one-kilometre mark is the perfect place to watch the sunset.

From an eco-lodge in a lush garden, to a charming heritage cottage, it's easy to hibernate near a fireplace, while wearing a fluffy robe, in the High Country. An eco log cabin where nature feels closer than ever.

The cooler months are for catching our breath and curling up by a fire. Here’s a plan for a slower-paced weekend of restorative lounging and excellent local food and wine. 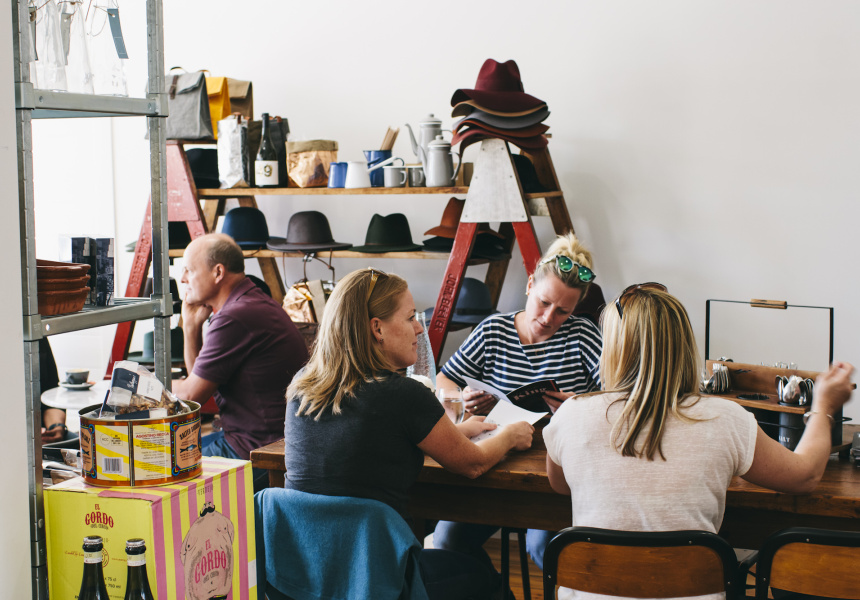 Start your day with coffee and biscotti at this Beechworth newcomer. The cafe also serves simple, flavourful dishes that pair its strong deli offerings with produce from local farmers. Take a drive out to beautiful Porepunkah to visit this family-run winery. Taste a selection of the vineyard’s 22 varietals, before picking a glass to enjoy with a DIY cheese and charcuterie board from the deli. The Spa at Beechworth

Spend a few hours enveloped in a robe and tucked under towels at this eco-minded day spa. Cups of herbal tea and soothing essential oils will slow the mind. A massage will ensure you’re truly moving at a country pace. 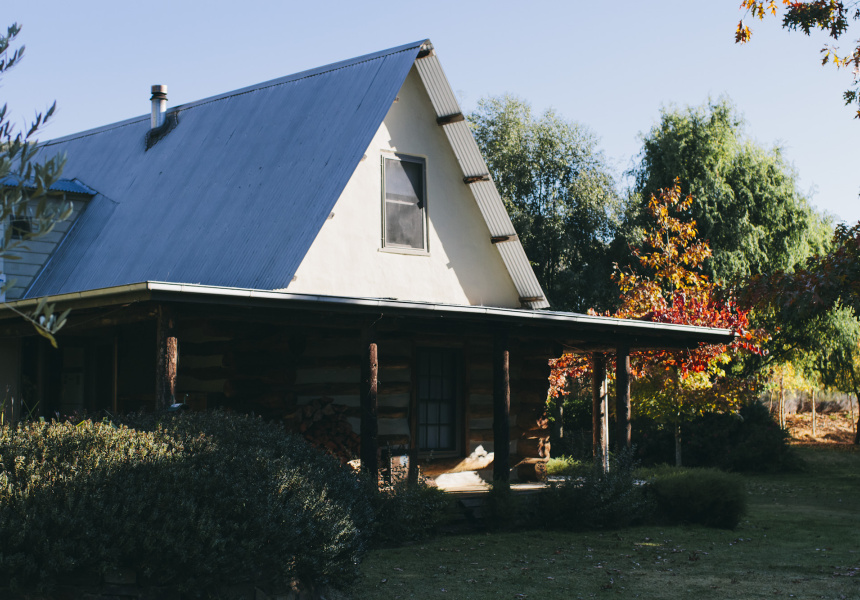 Check into your accommodation for the evening. This eco-lodge feels like a log cabin in the woods, complete with fireplace and plenty of blankets for keeping snug. Save the stroll around the lush gardens for the morning. Set in a grand 19th-century bank, this highly awarded restaurant exudes opulence, yet has a homey and welcoming atmosphere. Locally grown and foraged produce is translated into Japanese-influenced regional fare. Opt for saké to start, then leave it to the team to match wines accordingly. Finish the evening with a digestif at this cosy tapas den. Settle into a comfy lounge beside the fire. The intimacy of the space means you’ll quickly get to know the locals.