The Gold Rush boom town and surrounding region is becoming a regional gastronomy heartland for regional Victoria. In Partnership with Visit Victoria, we seek out the best places to eat, drink and stay. The Bendigo region has always been a plentiful food bowl. Just under two-hours north of Melbourne, it’s an area rich with producers who support and (literally) feed off each other, creating the perfect microclimate for paddock to plate produce. In 2019 the town’s shift from gold rush relic to modern dining destination was officially recognised, when it was named a UNESCO Creative City and region of Gastronomy, in recognition of its forward-thinking approach to locking in a self-sustaining future.

For the second half of the 19th century, the Victorian city of Bendigo produced more gold than anywhere in the world. But the region’s history goes back much further, and its riches far deeper. It’s the traditional land of the Dja Dja Wurrung and Taungurung people of the Kulin nation, and their enduring culture continues to be recognised in the heart of the city at Rosalind Park, in Bendigo Art Gallery, and in countless sacred sites throughout the region.

The Bendigo region takes in many towns, each with something unique to offer. Travellers can follow their nose in the Heathcote and Bendigo wine region, taste Australia’s “best” vanilla slice, visit a local butcher, enrol in cheese school (actually a thing) or drink cocktails on a rooftop bar. At the end of the day, retire to a serene stone cottage for a night cap by the fire pit.

Welcome to Bendigo and Surrounds It’s official – Australia’s best vanilla slice can be found at this no-frills Bridgewater Bakery. But it’s good for more than just an outstanding “snot block”. Pull in for mouthwatering pies and an epic selection of sweets that would put nan to shame. A true paddock-to-plate butcher shop. A bevy of cuts from the butcher’s own farm, plus a few more from surrounding farmers are spruiked here alongside small goods and dairy products from local producers. If you can’t be bothered with your barbecue, grab a ready-made meal to go. This century-old former Woollen Mill is home to more than 40 artisan producers. Everything here is made on site, so fill your tote with fresh-made goods from bakers, cheesemongers, chocolatiers and many more. A Bohemian brewery hidden in the back of an historic theatre. It’s a fortuitous pairing – the theatre’s kitchen slings pizza, perfect for soaking up the booze in some of those big beers you’ll be sipping on in front of the roaring fire.

Plunge deep into Shiraz country at this stunning hilltop cellar door. It’s like something you might see on Grand Designs, but with punchy red wine and local charcuterie on the inside. A Fourth generation wine-making family bringing Tuscan tradition to Heathcote. The area’s iron-rich soil is perfect for growing Italian grape varieties, and this is one of the best places to try them on Australian terroir. Stick around a game of bocce and a very long lunch.

Bendigo’s best and only rooftop bar. Pair the panoramic views of the city and surrounds with a classic cocktail and a spicy snack from the laid-back menu. Best of all, rain, hail or shine, Nimbus is primed for all weather types. This is one of the biggest and best art galleries in the country – city or regional. It might not be in a capital city, but the Bendigo Art Gallery constantly attracts big-name exhibitions from some of the world's most exciting artists. This sprawling parkland in the middle of the city was once a maze of goldfield activity. Now its 60 acres features a historic conservatory, artworks such as Michael Doolan’s Happy Ending?, a 1931-built poppet head, functioning as a lookout tower and 50,000+ Tulips in flower in Spring.

On the third Sunday of every month, the population of Talbot – a tiny town an hour’s drive south-west of Bendigo – explodes from 400 to 2000, as people converge for the Talbot Farmers Markets. Few towns have done as good a job of preserving their history as Maldon, a historic gold mining town 35 minutes south-west of Bendigo. Maldon boomed in the 1850s at the height of the gold rush and remarkably much of the streetscape remains largely unchanged. In 1966 it became the first Australian town to be classified by the National Trust, in recognition of its success in preserving its 19th century heritage. The town has many tours and workshops available to experience throughout the year as well as three self-guided historic walks taking you around Maldon’s most notable historic buildings, including the Kangaroo Hotel, the Freemasons’ Hall, the Royal Hotel & Theatre and Warnock’s Flour Mill.

From rustic escapes to water views, accommodation options lean into the land. This lake-side escape is an hour’s drive from bustling Bendigo. There’s an abundance of natural beauty to behold in the surrounding area, but the main attraction is the lake itself. You’ll be in prime position if you stay here. The Stables @ Heart of Gold Vineyard

A luxe retreat inside a revamped 1860’s sandstone cottage on a rural vineyard. It’s ten minutes from Bendigo, so you don’t have to go far to pull up stumps. And when you’re winding-down this close to a cellar door, you may as well taste all the wares on offer.

Take a tour through wine country and finish off with craft beer at the back of a stunning theatre. 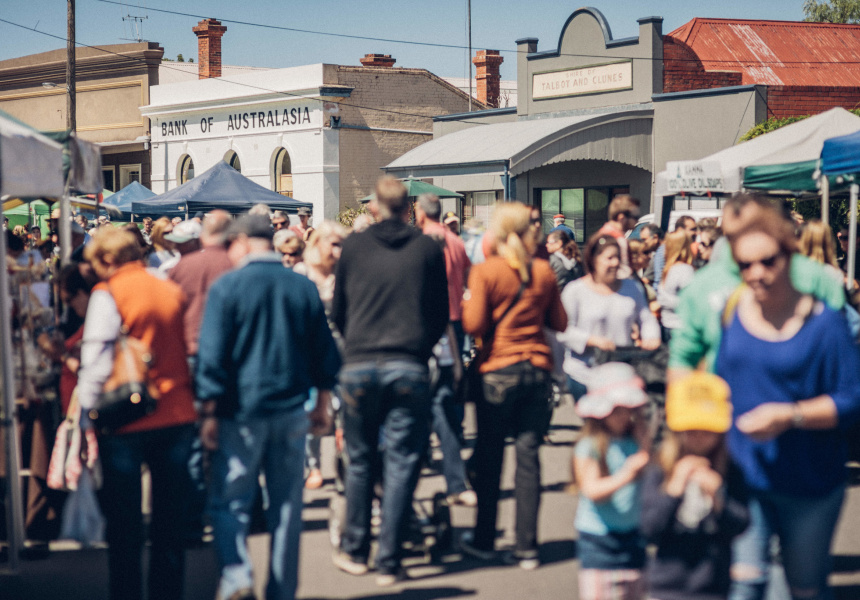 If it’s the third Sunday of the market start your day here and fill up on local produce and smallgoods. Grab breakfast and a coffee at Talbot Provedore and Eatery, the heart of the community. Drift between coffee roasters, cafes, a huge vintage bazaar, an artisan cheese maker, and around 40 other businesses, all under one (huge) roof. This is one of the biggest and best art galleries in the country – city or regional. Pop by and see what big-name exhibitions from across the world is showing. Stroll 10 mins up the road and take the elevator to Bendigo’s only rooftop bar. Watch sunset fall over the cityscape as you sip fun cocktails and peck at a platter of regional goodies. Order the “Chef’s Whim” at this fine dining, modern European restaurant in a historic bank building. Then walk off your day’s excesses with a stroll around Rosalind Park, just across the road. 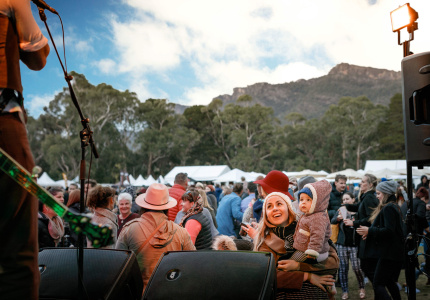