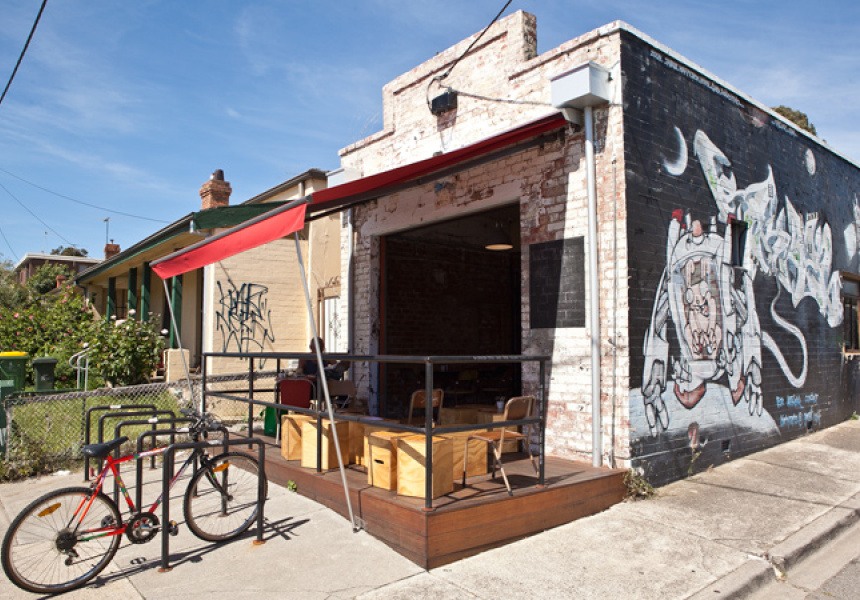 Espresso Alley’s fit-out doesn’t hint at its former life as a glove factory – it’s as though it’s been here for years. Exposed original brickwork works nicely alongside tables made from timber recycled from the Northcote bowling alley, ‘50s Sebel chairs and steelwork by local handyman Steve Edwards.

Founder Vince Mazzone (ex-Tre Bichierri owner) set up the cafe in the final months of 2011, before selling it to George Nakhoul several years later.

Nakhoul hasn’t changed too much. The cafe still has a calm, quiet atmosphere, and the menu’s subtle Middle Eastern influence remains. Baked eggs are spiced up with harissa and finished with feta. Sumac yoghurt and za’atar lend mushrooms and scrambled eggs an earthier finish.

Other choices include croissants; smoked salmon bagels; and coconut, cacao and almond granola.

On weekends you’ll find locals seated at the front alfresco section with their dogs, enjoying a Melba organic coffee. Join them for some sun, or head inside and take a seat at the counter to watch your breakfast being made in the open kitchen. 15 Takeaway Spreads for Grand Final Weekend, for Those With Footy (or Newfound-Freedom) Fever