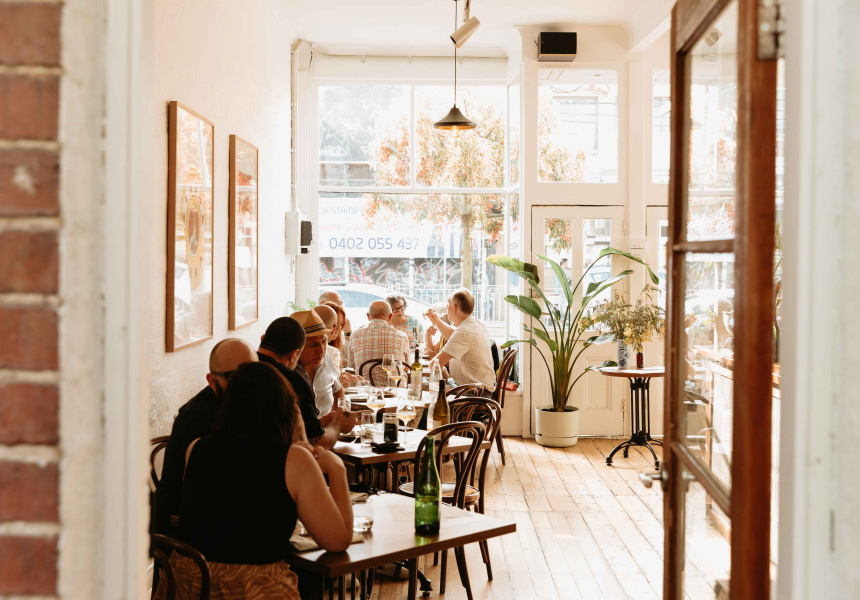 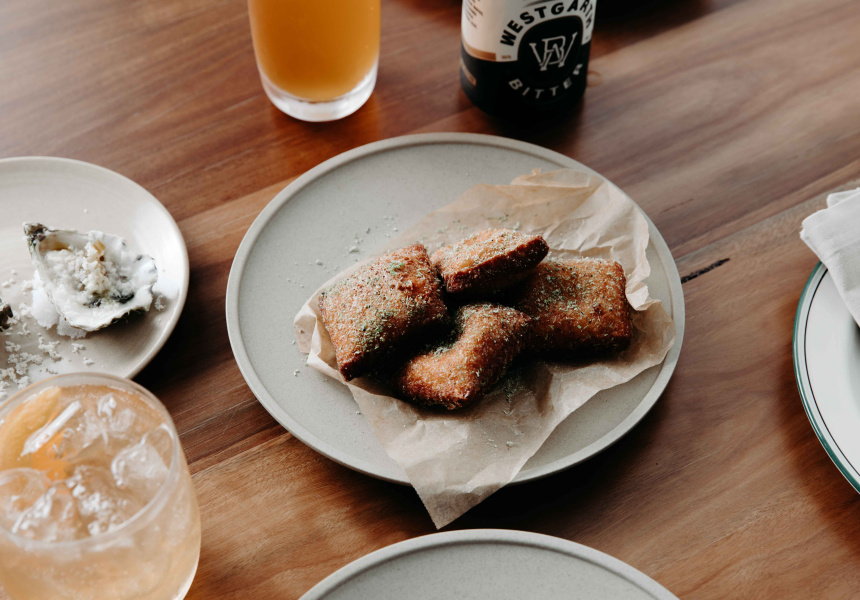 The trio didn’t have to do much to the former Westgarth cafe to turn it into the contemporary wine bar they envisaged. A coat of white paint and a slight rearrangement of the solid red gum counter for the airy dining room, and some new large-scale photographic prints of a Starbuck’s cup, a tin of Sirena tuna and a box of Redheads matches by Melbourne artist Monica Styles for the back wall.

In the afternoon the interior is bathed in sunlight, but if you can’t nab a seat there the astroturfed courtyard is your next best bet, under the shade of an impressively large lemon tree dotted with fairy lights.

The menu is concise and changes often. It might include tiny, intensely fragrant turnips poached in dashi, glazed with soy and vinegar and smoked over feijoa wood from a tree the team removed from the courtyard. Or Stockbrot; dough that’s been wrapped around a stick, dusted with sesame seeds and grilled, served with whipped crème fraiche and pumpkin-seed oil made by Ribul’s family in Austria. The team has a veg-focused ethos and shuns large amounts of protein – but that doesn’t mean the menu is all vegetarian.

Spanish mackerel comes with chickpeas, sorrel fronds and a creamy brown-butter emulsion, and hangar steak is served with whole roast beetroot from Day’s Walk Farm and a coffee-kombucha glaze. For dessert there’s amaro sorbet, and a vegan mille-feuille. Its “pastry” is made by steeping sheets of potato in sugar syrup, then layering it with coconut cream, lemon gel and rhubarb.

Vex also takes a low-waste approach. Leftover turnip leaves are fermented, ready for use in dishes months down the track, and lemon rinds are currently being used to make salted lemon curd.

When it comes to wine the team opts for producers with good farming ethics and buying in small quantities so they can bring in new bottles often and keep things fresh.

Beers are from breweries nearby, including Westgarth Bitter, a hyper-local collab with Low Key, a small bar just over the road, and Bodriggy Brewing Co in Abbotsford.

House-made tonic is flavoured with whatever is on hand; perhaps kaffir lime leaves from the tree in the courtyard (paired with the Southeast Asian flavours of Kyneton’s Animus gin), or a coriander-fennel tonic that the team serves with Hendricks.