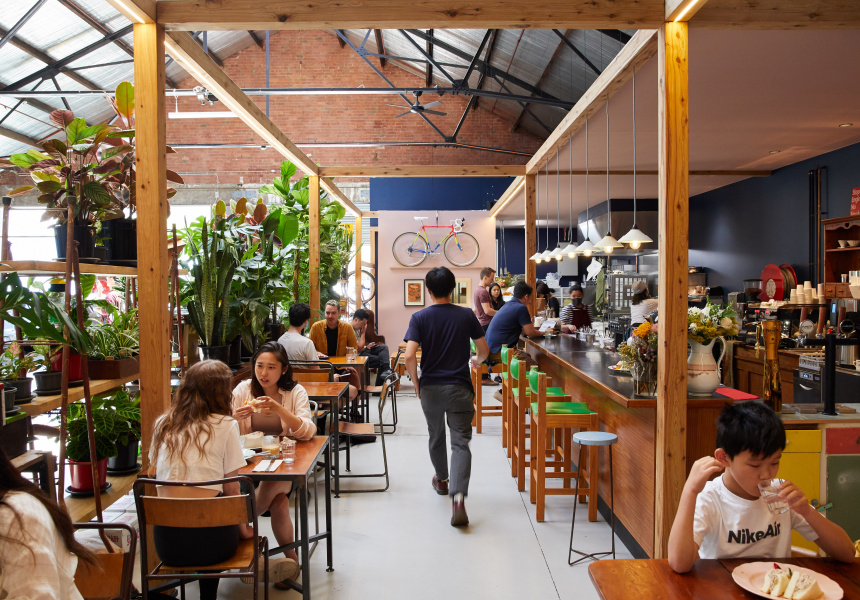 Le Bajo is a Japanese cafe named after an Indonesian fishing town in a warehouse decorated with Australiana memorabilia. It might sound like a mishmash, but it works.

Jason Gunawan, one half of the duo behind Bali’s Potato Head Beach Club empire, was about to start building another beach club and hotel in Labuan Bajo – a fishing town on the large Indonesian island of Flores – when Covid hit.

Forced to stay in Melbourne, he decided to turn 100 square metres of his enormous North Melbourne garage into a sando-centric cafe, Le Bajo (short for Labuan Bajo), just opposite his impressive collection of old-school Mercs and Porsches. Le Bajo opened at the start of 2020.

Gunawan was born in Sydney but has lived between Australia and Indonesia his whole life. In Melbourne, his local cafe is 279, just around the corner from his warehouse. And he recruited owner Kantaro Okada to open Le Bajo with him.

Okada designed the menu, which kicks off with a breakfast set. It includes a thick toasted slice of house-baked shokupan (Japanese milk bread), scoops of Japanese potato salad, a boiled egg, a small pot of yoghurt and a batch brew. There are nine toast toppings including ogura (red bean) and metai (spicy cod roe). And there’s a tamago (egg) sando.

From late morning into the afternoon, traditionalists tend to go for the saucy fried-chicken katsu sando with cabbage and house-made miso sauce. It’s a classic. But there’s also an ebi (prawn) option with wasabi-spiked tartare and a veggie-packed sando. Plus, “dirty” fries tossed in your choice of seaweed-y miso mayo or teriyaki butter.

Less common are the fruit sandos displayed in the fridge, where whipped cream and sliced strawberries, kiwi and mango are encased by crustless shokupan. The fluffy loaves are also available to take home, whole or halved. House-made sodas, spiders and milkshakes are a nod to Gunawan’s obsession with the Australian milk bars of old. Japanese tea accompanies airy sponge cakes, which usually sell out by noon.

The retro plates, lime-green bar stools and wooden chairs with steel tubing are all from the market and regional second-hand stores. A bike rack welcomes cyclists and the industrial timber shelving that separates Le Bajo – an effortless, minimalistic space – from Gunawan’s garage is billowing with greenery.