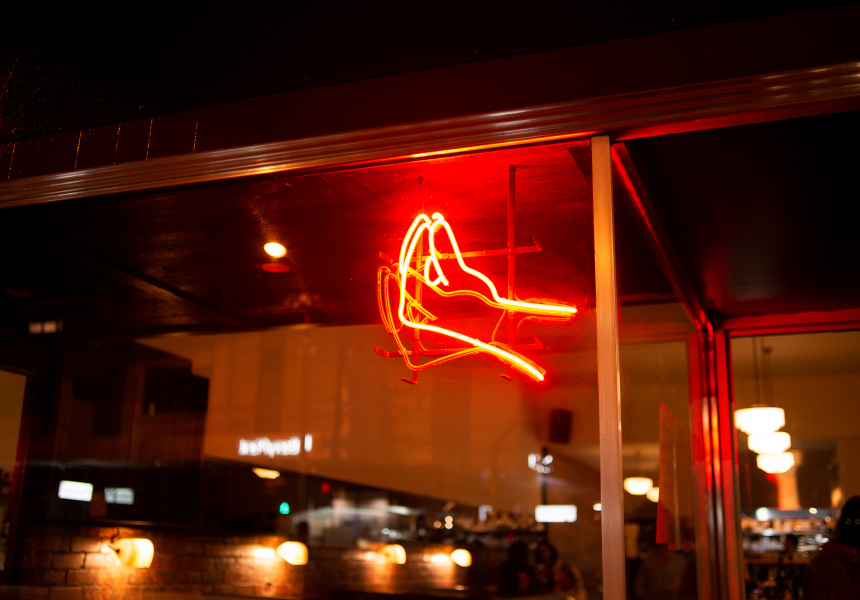 Before you even set foot in Va Penne, you’ll be struck by the animated, neon red hand (with “pinched fingers”) flickering in the window. A classic Italian gesture, it translates to something like, “Whaddaya want?” It’s bold, a bit flippant, but ultimately charming – just like this dimly lit Italian bar and eatery. (And its name is a pasta-y play on va bene, which means “alright” in Italian.)

It’s run by Szebastiaan Butler and Gustavo Gonzalez, who also also own Joe’s Shoe Store down the road.

Like Joe’s, the drinks list at Va Penne is short but sharp – and reasonably priced. Vermouth is a big focus, present across about half of the cocktail menu (try a sour made with chinato, an aromatised wine somewhere between a vermouth and an amaro). “

There’s also a small selection of local and Italian beers (Peroni Red included) and, of course, wine. The list is centred mostly around Italian-style drops, but that doesn’t mean they’re all imports.

There’s also a selection of punchy 11-inch pizzas, with toppings such as gorgonzola, fig and vincotto; and broccoli, white anchovies and chilli.

While the menu has no particular regional focus, it changes with the season. Southern-Italian dishes and ingredients take pride of place in summer and spring, while the team moves towards northern-style cooking in the cooler months.

Va Penne’s outdoor courtyard has room for 40 people. Inside, there’s a curved front bar, exposed red brick and cosy booth seating built by the same person responsible for the Joe’s fit-out – a dose of familiarity for those not quite ready to move on.

On the speakers, you’ll hear a heavy rotation of Italian new-wave, soul and rock selected by front-of-house manager Lazlo Evenhuis.