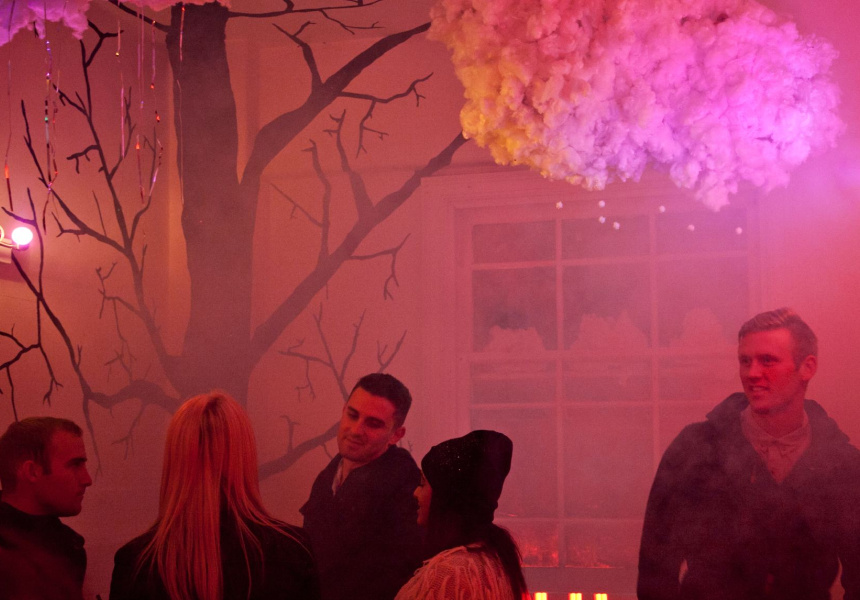 The brief was simple albeit rather ambiguous: be creative, imaginative and ultimately clever. Inspired by Tokyo’s Golden Gai district where bars are no larger than five square metres, the Carlton launched a competition in early June, inviting punters to recreate six of their empty fourth floor rooms into individual nightspots. The results? A pop-up extravaganza with serious potential.

“Choosing the winning candidates was a bit like curating an art show,” explains proprietor Tracey Lester. Having sifted through 120 different entries, the focus was to establish an appealing environment that allowed for six distinct concepts. Although considering that winners were only given $500 each for spending, the bars are surprisingly complementary and equally engaging.

Pass through the red neon chandelier adorned corridor and grab a beer at The Sandy Bunker, embrace the Australiana vibe at Azaria bar and dance amongst the glittery clouds at BOM Bar. But if you’re feeling a little more adventurous, drop into Pickleback Bar for a shot of the same name (whisky chased with pickle juice), belt out some karaoke at Kanpai bar and let it all unwind at Barriba Bar.

The experience is truly convincing and in case anyone’s wondering how a bunch of unseasoned business owners could pull it off, Lester assures us that their crash course in hospitality 101 was well informed. “We’ve fully trained them, run a few workshops, taught them responsible serving of alcohol and everything about the nitty gritty stuff that happens behind the scenes.”

Continuing throughout July, the bars will be open from 8pm to 3am on Fridays and Saturdays, however sufficient success might turn the idea into a regular fixture. Any good banter or service can be awarded by voting online too, as the winner will be remunerated with a handy $1500 cash prize.

Open Fridays and Saturdays in July, from 8pm to 3am.