How does an aspiring artist become an accountant, only to end up as the most innovative bar owner the country has ever seen? 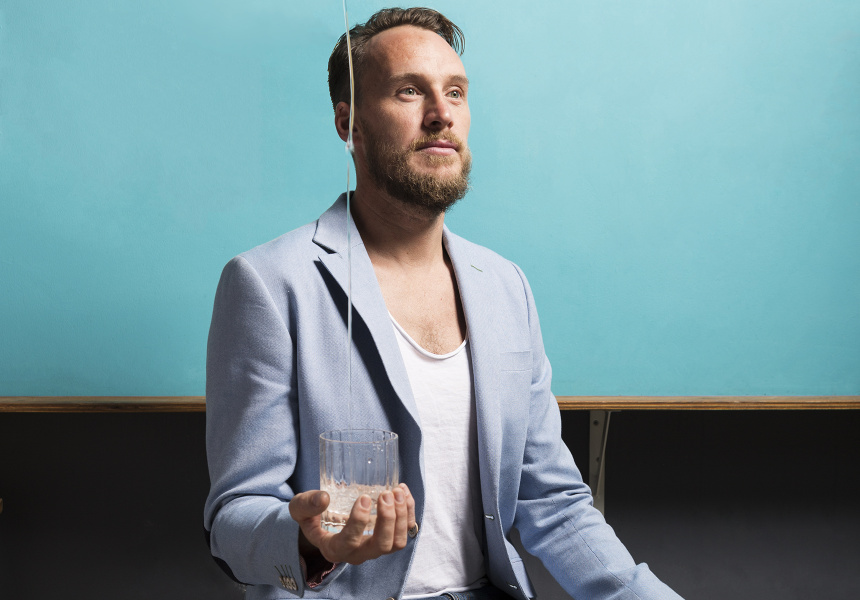 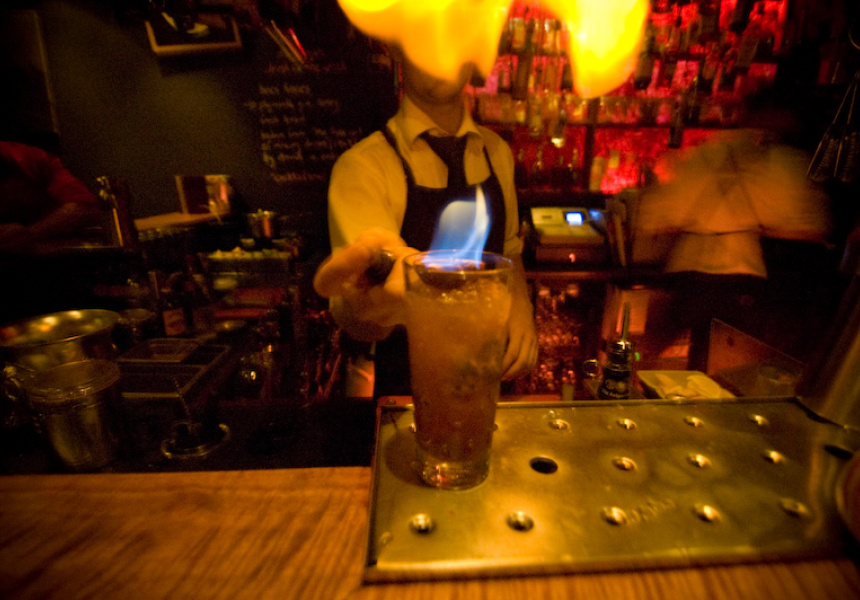 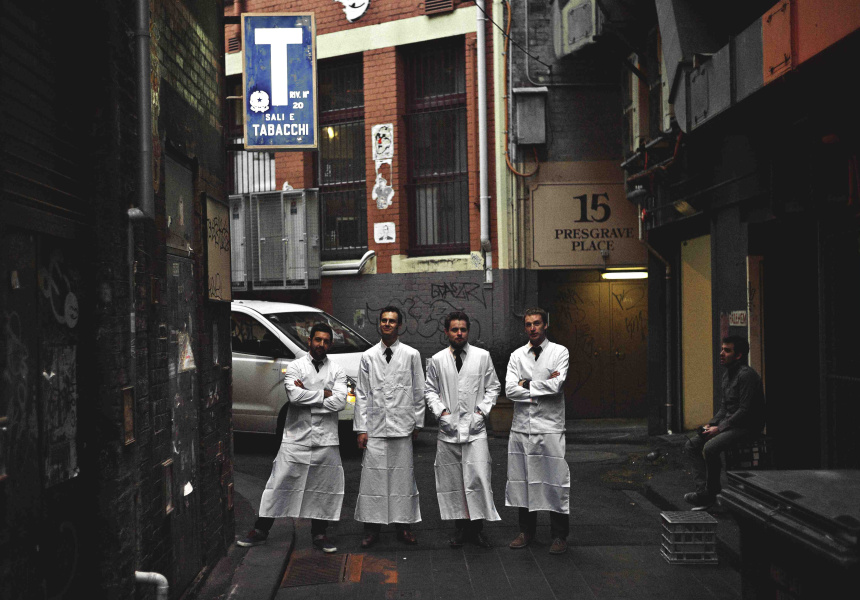 As a fledgling bartender I would sit at the bar at Der Raum, Melbourne’s now- departed house of obscure cocktails and curiosity. Despite some of the most expensive cocktails and longest wait times you’d ever encountered, the little Richmond bar was consistently full and attracted national and international plaudits year on year. Sitting underneath hanging bottles, I watched and I learned. Der Raum took everything I knew about classic drinks and turned my training on its head. I was rediscovering what I loved about making drinks. It turned drinking sensibly into a multi-sensory experience that was so much more than getting a buzz. Part of me wished I didn’t get so drunk, so I could keep drinking and fully appreciate what was being handed to me. Generally I ran out of money before I got too deep.

I knew all the bartenders by name. I’d worked through the list several times and it was fair to say I was a regular. But in almost five years of propping up that dimly lit bar before it closed suddenly in 2012, not once did I spot Matt Bax, the mysterious man behind all of it.

I’d heard rumours. One was that for a while he slept in the back of Der Raum to save on rent and direct his money toward increasingly expensive equipment for the bar. Another was that in addition to running Der Raum, he showed and sold his own art both here and in Germany. He was an enigma to me and when I imagined meeting him, I feared I’d struggle to say something cool or relevant enough.

In spite of the public and media interest around his highly conceptual bars (the back-alley, 10-person-capacity Bar Americano; the Jamaican rum shanty Bar Economico; and the upcoming Bar Exuberante), Bax has never really played ball. Whether it’s through deliberately evasive tactics or just a seriously busy schedule, he’s notoriously difficult to pin down for an interview.

On a recent junket for a major booze company we were in close quarters for three days. I finally got a chance to meet the man and we got talking. There’s certainly a stubborn mystique to him, but not necessarily what I expected.

Tall, slender and good-looking, at 40 he has an almost brash and commanding presence, while also being slightly shy. He’s equal parts reclusive artist and extroverted bartender – a weird mix, although his beginnings are even more unlikely.

Born in Adelaide, Bax grew up in a small country town outside the Coonawarra. His father was an artist and art teacher. Coming from a working class background, he decided a degree in accounting would put him on a path less impoverished.

A move to Germany changed things, though. While away, Bax began dabbling in the art world with his own small exhibitions, while still continuing his career as an accountant. He was a long way from rural South Australia, and ideas were forming.

In 2001, Bax returned to Melbourne and with an old friend, Lance Forgen, decided to open a European-style bar serving the classic cocktails he’d encountered on his travels. With no formal hospitality training, they took a lease on an old pizza shop in Richmond and opened Der Raum. “All I knew was that I’d loved drinking classic drinks in Germany because they had a great scene there. And I knew that nobody was doing that back in Melbourne. Vernon [Chalker] was doing Gin Palace. Other than that, there was nothing.”

Their lack of experience was pretty evident. Bax remembers, “We pretty much lifted the menu from Havana Club in Munich. We didn’t know the specs for most of the drinks, and couldn’t even make half the drinks on the menu.”

You often hear stories of guys throwing in their day jobs to open a bar or a cafe.

It generally ends with said guys back in their old jobs before the year is out. There is a reason accountants don’t just turn around and decide to become bartenders. Unsurprisingly, before long the two partners were in financial hardship and split. Out of sheer necessity, Bax had to pick up the shaker tins and learn very quickly how to make the classic cocktails his menu was built on.

In a stroke of luck he managed to lure a bartender named Paul Aron, who had just returned from a stint in London working at classic bars such as Che and Atlantic. “I don’t even know how we got him to come and work for us. He was great and taught me the fundamentals of making drinks,” says Bax.

As Bax became competent at mixing the basics, the temperament of the artist returned to the fore. Still, a lack of formal training meant he couldn’t pull off the classics with the speed and aplomb of accomplished bartenders. “So just out of necessity I started doing things differently,” Bax says.

Taking inspiration from his chef friends, he began experimenting with molecular gastronomy techniques from the fine-dining world: sous vide, rotary evaporation, even nitrogen. The result was drinks such as The Pharmacy, a roast capsicum-and pear-infused cocktail served in a medicine bottle with an Aperol-filled syringe and a sherbet pill. Even the sherbet capsule was pressed in- house. You also needed more than a $20 bill to pay for it. These drinks forced the industry and the customers to look at what defined a cocktail, what it was worth and what was possible when creating it.

After opening The Tippling Club in Singapore and entertaining well-heeled expats for a few years, in 2011 Bax returned to Melbourne to open Bar Americano with Der Raum bartender Matt Rees. Hidden among graffiti and dumpsters in the CBD, its concept is a Prohibition-era, European bar for travelling Americans. The space is licensed for 10 people. Any bar owner will tell you it’s near impossible to function with those numbers and turn a profit.

Then in 2012, Bax suddenly closed the doors on Der Raum with only a vague explanation. He cites staffing issues and an inability to control the circumstances from his new home base in Munich where he was putting the finishing touches on yet another new venture, Gamsei. At time of closing, Der Raum was 11 years old. Very few bars become institutions like Der Raum did and it went out on top, still innovating and challenging consumers and industry alike.

Although many Melburnians wouldn’t know first hand, Gamsei was an incredible concept, utilising seasonally available produce with a heavy reliance on foraged ingredients. It was a fresh, clean space designed to again challenge the way we see and interact with cocktail bars. In Bax’s own overt way, he says, “Gamsei was my little protest against what I see as the globalisation of cocktail bars.” It was, however, short lived, primarily for personal reasons, and Bax returned to Melbourne to reboot the space left empty by Der Raum.

In 2013, Bar Economico opened in the old Der Raum site. It would be difficult to create a greater antithesis to what Der Raum was. Bax explains, “We wanted to break all ties with what we were doing. There’d be no hangovers from what we were doing at Der Raum.” And he’s certainly achieved that with what he describes as “A rum brothel”. The drinks are somewhat simplified, the space is basic and raw, with miniscule details that provide insight into Bax’s peculiar and dry sense of humour. The dominos are free to play and you have to dispose of your own rubbish. Some people get it, while others fail to see the humour and its context relative to what came before it.

Now, in the small, windowless back room of Economico, Bax is constructing his next conceptual venue, Bar Exuberante. Despite its tiny capacity, he’s appointed local design studio The Company You Keep to create the bar’s profile. He’s purposefully tight lipped about the details. What he has told me is true to the raw humour he continually exudes, furthering his comment on the homogenous state of bars across the world.

“It’s a self-rated five-star bar. It’s a bar in the lobby of the hotel that used to be the best bar in town. They still think they’re relevant, but they just haven’t moved with the times.” Think Grand Budapest Hotel, with a lingering arrogance.

What is also exciting is the return of certain Der Raum classics, including the game changing, hot and cold +/- Pina Colada. The rotary evaporator is waiting to whirl again and produce one-off hydrosols. The creativity of his entire team is in overdrive to design beverages that will again redefine what we think of drinks, and probably how much we’re willing to pay for them. Despite the relative irony in the concept, there is no doubt the product will stand up to the expectations of those who once frequented Der Raum, and the industry critics waiting to see if Bax still has it.

We know he remains relevant. He just returned from presenting a seminar at a bar show in Athens, and was instrumental in the drinks offering at a major industry event by Attica chef Ben Shewry. The question is, will this new venue tie together all of the elements of which Bax has displayed a keen sense of understanding?

As we wait for the doors to open, I probe Bax on his longer-term plans. “I would like to reboot what I was I doing in Germany. It still eats away at me. I don’t have any missions to open 30 bars, but I want to be constantly challenged.”

What I discovered about Bax is that he’s an artist before he’s a bartender or a bar owner. He fell into this industry and he acts almost outside of it, challenging and commenting on it as if from afar. Although polarising, he reminds the hospitality industry at large that you can create amazing concepts and products without having to take yourself too seriously.